The Buffalo Sabres are back in action again tonight. Coming off of a thrilling 3-2 overtime win over the New York Islanders last night, the Sabres head south for a meeting with the Carolina Hurricanes. Buffalo comes into tonight as winners of three of their last four and are starting to climb up the Eastern Conference standings. Last night’s victory and outcomes around the league jumped them up to 12th in the standings in the East. Tonight is another opportunity for them to continue to move up the ladder. A win against the Hurricanes combined with a Tampa Bay Lightning loss to Edmonton tonight they’d move up to 10th. 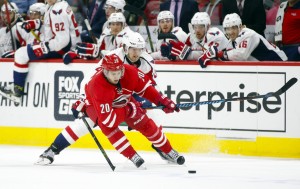 Like the Sabres, Carolina played last night as well. They fell to the Washington Capitals 4-3 in a shootout in their home building. Both teams will be playing their second in two nights and third in five nights. The Hurricanes have a slight advantage as they haven’t had to travel as they’re in the midst of a four-game homestand.

The Hurricanes are a young team that is full of talent. Winger Sebastian Aho is an exciting player to watch and very creative with the puck. Former Chicago Blackhawks center Teuvo Teravainen is having a good season as well in his first year with the Hurricanes. Both players are on a hot streak with each of them recording five points in their last five games.

Buffalo may be getting back one of their injured defensemen tonight. Both Zach Bogosian and Taylor Fedun have practiced in full over the last few days. Head coach Dan Bylsma indicated yesterday that there was a chance one of them would get back into the lineup tonight, but would not indicate which one. With no morning skate, we won’t know until an hour or two before game time if Bylsma has any lineup changes from yesterday.

1) Anders Nilsson will be back between the pipes for the Sabres tonight. The 26-year old goaltender has won his last three starts and four of his last five. However, he’s allowed at least three goals in his last four games. With the Hurricanes potential to fill the net in bunches, the Sabres will likely need to give Nilsson another good game with their goal support.

2) Rasmus Ristolainen remains red hot after scoring his second game-winning overtime goal last night. He’s on a five-game point streak and has registered a total of eight points in those five games.

Ice in his veins.

3) The Eichel effect has continued as Buffalo is 5-2-1 in the eight games Jack Eichel has played this season. He’s been impactful to the team with not only his production, but his presence in the lineup gives other players more space to create scoring opportunities.

4) The Sabres need to keep an eye on the Aho-Teravainen-Stempniak line tonight. They’re not the Hurricanes top line, but they have the potential to disrupt the game. It’ll be interesting to see how Bylsma chooses to deploy the Larsson line, which he uses as his shut down line. Will he match them against the Staal line or Teravainen line?

5) Although it appears he’s not playing tonight, the Hurricanes currently have Michael Leighton as their backup goaltender with Eddie Lack out. Sabres fans may remember Leighton from the last time Buffalo was in the playoffs. He was part of the three rotating goalies the Philadelphia Flyers used in the series back in 2011.

The Sabres appear to be picking up momentum and confidence as we get near the end of 2016. They’re starting play like a team who believes they can win every night. The goaltending and scoring are running hand in hand right now. They’re scoring over three goals a game in their last eight and the goalies have continued to play very well, especially Robin Lehner.

The end of the injury concerns may also be on the horizon as well. Both Bogosian and Fedun appear ready to get back in games, while Tyler Ennis has spent the last few days skating on his own in his effort to get back from double sports hernia surgery. We may see the full roster very soon.