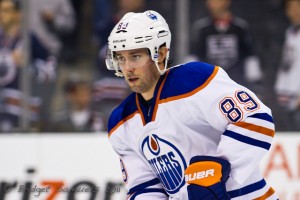 Last night’s game between Edmonton and Los Angeles was one for the ages. No one could have better scripted the outcome, as the Oilers beat the Kings in one of the most bizarre games of the young season.

Edmonton’s home opener against the San Jose Sharks was one they would like to permanently forget. Devan Dubnyk got shelled for six goals in the first period, and the Oilers looked unprepared and unfocused through the first 20 minutes. But what’s important to note about that game was that the team put up a remarkedly better effort through the final two frames, and that effort was clearly carried over into the game vs. the Kings.

Coach Ralph Kruegar preached discipline to his young squad, but they got into penalty trouble early on. Ladislav Smid and Shawn Horcoff both got penalties at the same time, giving L.A a full two minutes of 5 on 3. But the Oilers penalty kill stood tall, killing it off, and keeping the game scoreless. Smid’s night wouldn’t get any better, as he fell victim to a new rule for delay of game, and was once again sent to the box. The Oilers killed off that penalty as well, but Smid would be at it again, earning a 10 minute misconduct and another penalty for instigating a fight with a visor on. The first period seemed like an endless parade to the penalty, but miraculously the score remained at zeros going into the intermission.

The game feature a whopping 17 combined powerplays, but they seemed more like power-less plays, particularly for the Kings who have yet to score with the man advantage this season. After the loss to the Sharks, critics were quick to write the Oilers off due to the defensive breakdowns and shaky goaltending  Nobody need to bounce back any more than Devam Dubnyk, and he was absolutely stellar. Dubnyk was calm and composed in the net, not giving up rebounds and looking every bit like a number one goalie.

At the other side of the ice, Kings goalie Jonathan Quick was back to his Conn Smythe form, stopping 37 shots, some in spectacular fashion. The Oilers did have a miscue on defense in this game, and it led to the Kings only goal. Jeff Carter was sent in all alone and roofed a backhand that Dubnyk had no chance of stopping. It looked like Quick would hold the fort and allow the Kings to escape with the victory, but late in the third period, the fun started.

The Oilers were pressing hard for the tying goal, but Quick kept shutting the door. With 1:05 left in the game, it appeared that Ryan Nugent-Hopkins scored to tie things up, but after the celebration died down, the goal was called off due to goaltender interference. Sam Gagner was pushed into Jonathan Quick, but a replay drew the ire of the fans and Coach Kruegar when it was clear Gagner’s skate was stuck in Quick’s pad and he couldn’t get loose. The crowd threw debris on the ice and rained down boos on the referees, but the goal would not stand.

Once the ice was cleaned up and play resumed, Oilers sent Eric Belanger in to take the faceoff, a move that turned out brilliantly. Belanger won the faceoff, got it back to the point where Justin Schultz’s shot got to Taylor Hall. Hall sent the puck to the net and the rebound was batted in by Nail Yakupov, who proceeded to do this:

Hockey purists are never a fan of excessive celebrations, but you can’t help but smile at the raw emotion displayed by a rookie. The old phrase “act like you’ve been there before” doesn’t apply here, because Yakupov hadn’t been there before.

“The fans was crazy,” said Yakupov. “It was probably my greatest feeling. We showed our heart. It was the best night in the world. I’ve never seen anything like this.” (TSN)

With the game headed to overtime, the crowd was buzzing. Fitting for a game such as this, the Kings got a penalty and the Oilers headed to the powerplay. They had yet to score with the man advantage, but it’s better late than never. At the three minute mark of the extra frame, Ryan Nugent-Hopkins fed a beautiful pass through the crease right onto the stick of Sam Gagner who made no mistake to seal the victory for the Oilers. Yes, it was poetic justice for Gagner, who was the reason Edmonton’s first goal was called off.

Anyone who watched this game would agree it was pretty spectacular. The drama, the unpredictability. This is what hockey is all about. And for the Oilers, it was about bouncing back, beating the defending Stanley Cup champs, and gaining another two points in the standings. Welcome back, NHL.