These days, Sabre fans are desperate for an ounce of good news. They’re getting a ton of it.

Casey Mittelstadt, the Sabres first-round pick (eighth overall) in 2017, is making the most of the World Junior Championship stage. He’s been a dominant player every time he’s been on the ice, at times carrying Team USA on his shoulders.

Mittelstadt was all over the ice against Team Canada. His three-assist game on Friday for Team USA against Team Canada was more than impressive. Battling and almost willing his team to rally from deficits of 2-0 and 3-1, Team USA eventually won 4-3 in a shootout. Mittelstadt had the primary assist on Team USA’s first goal and the only assist on both third-period goals.

Mittelstadt was named Team USA Player of the Game, the second time in three games. He’s a clear frontrunner for tournament MVP so far.

Equally impressive, Mittelstadt was on the ice when things mattered most at the end of the game, and nearly ended the game in the last minute. He’s responsible in both ends of the ice and always wants the puck on his stick.

Thursday night against Slovakia, trailing by a goal, Mittelstadt made a play everyone is still talking about. He picked the pocket of a Slovakian player at the blue line, skated across the blue line, then, with some fancy mitts, deked wide around a defenseman, pulled the goalie out and went backhand-forehand easily sliding the puck into an empty net. It was Bobby Orr-like as he went flying through the air after scoring to tie the game.

After three games, the 19-year-old has three goals and three assists for six points–topping all scorers for the tournament. He has seven shots on goal and is a plus-three. In Team USA’s opening game, a 9-0 rout of Denmark, he had two goals.

“He was doing the right things and we all saw his stickhandling ability,” said U.S. head coach Bob Motzko. “That was a great start for Casey. For a skill guy, there’s nothing like scoring a few goals to feel like you’re in the tournament.”

In the game against Slovakia, he had one goal. His three apples in Friday’s outdoor game gives him six points. That’s one more point than Team Russia’s Artur Kayumov, a 2016 second-round pick (50th overall) of the Chicago Blackhawks and Klim Kostin, a 2017 first-round pick (31st overall) of the St. Louis Blues.

After the loss to Slovakia, Mittelstadt was hard on himself.

“I think [the loss] was not very good and I don’t think it was very good for our team. We were definitely going to move forward from that. We definitely played better today. I’ve got high expectations for myself, higher than anyone else. Coming into it, I expect myself to play good and be one of the better players. It’s been a good start for myself and obviously we have a long way to go.” – Casey Mittelstadt

Golden on Every Level

It’s both exciting and encouraging to see Mittelstadt excelling.

Though this is his first IIHF World Junior Championship, Mittelstadt is no stranger to elite prospect tournament play. Mittelstadt played on the U.S. Under-18 Men’s National Team, winning a bronze. In 2015, he also played at the Ivan Hlinka Memorial Cup in the Czech Republic. 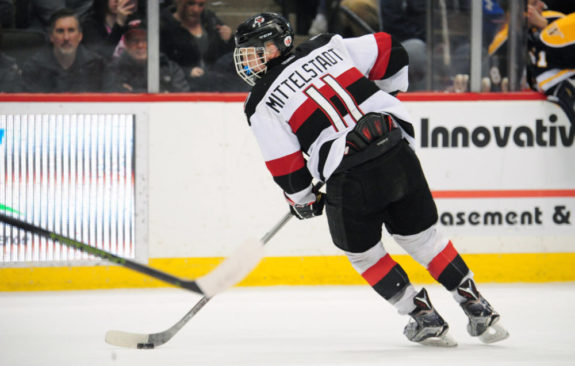 Named Mr. Hockey, as the best high school senior hockey player in Minnesota, the baby-faced prospect couldn’t perform a single pull-up at the 2017 NHL Combine. Many mocked him, but there are no stat columns on the ice for pull-ups.

What Mittelstadt may currently lack in physical strength, he makes up in a tenacious work ethic. He’s fiercely competitive, with what his college coach calls, “some bulldog” in him. His 17 points in 19 games ranks second on the team. Still, he knows he needs to spend some more time in the weight room.

Despite his successes, he’s an incredibly down-to-earth guy. “Off the ice, he’s such a humble guy,” said USA Gopher teammate Ryan Lindgren. “You would not be able to tell that he is a former Mr. Hockey and eighth overall pick by the way he carries himself.”

Lindgren was on last year’s gold-medal winning team and believes Mittelstadt is an X-factor–a player that can deliver in the clutch situations when the team needs a key play or goal.

When Will He Be in Buffalo?

Now, Mittelstadt is a freshman for the University of Minnesota Golden Gophers in the Big Ten Conference. It’s very likely he’ll be one and done there. He’d be leaving millions of dollars on the table if he played out his four years in college and risked injury.

Botterill loves college players and college hockey, so expect the Sabres to try to sign Mittelstadt, giving him millions of reasons to leave early.

It’s possible he could leave Minnesota early and play a few games in Blue and Gold at the end of this season, then join the Rochester Americans for a playoff push.

More than likely, he’ll play out his freshman season, then be with the Amerks to start next season while building up his upper body strength and fine-tuning his game. It’s the more patient approach, allowing him time to acclimate to the speed of the pro level. The question is, how much patience does Botterill have?

If Mittelstadt prospers in development camp and the preseason, he may very well earn a roster spot on the Sabres next year.

Regardless of the path Jason Botterill and Phil Housley choose, it’s clear Mittelstadt is one of the premier prospects in the pipeline for the Sabres. He’s an electric presence on the ice with hands of gold. His awareness on the ice is terrific, finding open space and excelling at the transition part of the game. His predatory instincts and consistent effort command attention. 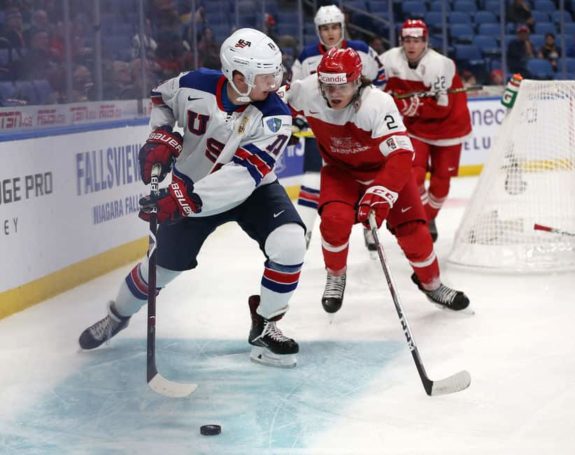 His quiet intensity and work ethic are only matched by his creative playmaking and speed. He drives the puck to the slot where his tremendous stickhandling takes over, with a knack for finding twine.

Some Sabre fans want to see Mittelstadt in Buffalo as soon as possible. Others want to let him develop in Rochester. Given the Sabres’ difficulty generating offense, it’s easy to feel giddy about having the best player in this tournament.