The news is starting to sound like a skipping record. The Sharks playoff picture has been on a collision course with their rivals in Southern California.

Playoff Preview or Not, McLellan says Sharks need to be better against LA —David Pollak

Correct me if I’m wrong, but the Sharks are a full 11 points better than the Kings. Right? They are seeded above them. Do those points mean nothing? Sure, the points only mean so much once the playoffs start. But it seems like they are being largely ignored. 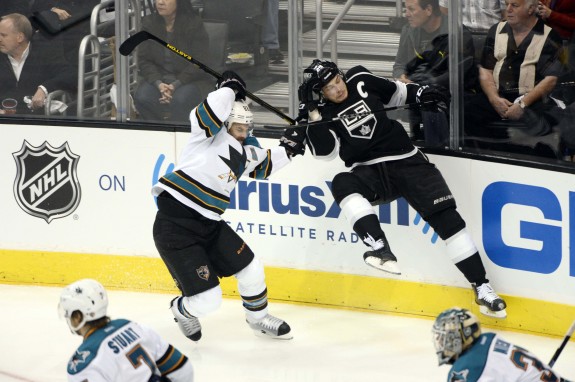 A point behind the Ducks with Anaheim having played two games less than the Sharks, San Jose is destined for the second seed. According to Sports Club Stats, there is only a 4% chance that they can seize the top seed in the Pacific Division. This leaves a near certainty that the Sharks must face the 3 seed in their division or a wildcard seed. Four likely opponents remain:

So, in all likelihood, here we go again. The great rivalry of LA and the Bay is ignited again on ice.

Putting Last Season Behind Them 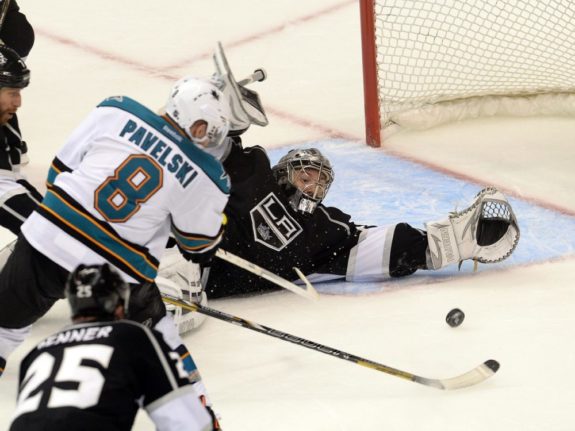 A well-fought seven game battle between these two teams last season ended with the Los Angeles Kings prevailing on home ice. The home team won every single game in that series. A series in which Anze Kopitar was all but neutralized revealed that the biggest Shark hunter in the NHL is Jonathan Quick. Team Teal could only muster more than 2 goals in one of the seven games. And it was in a losing effort.

As ineffective as Marty Havlat has been in San Jose, his injury, coupled with the suspension of Raffi Torres, crippled the Sharks’ forward lines. San Jose played the series with six NHL forwards and six forwards that found themselves wide-eyed and starstruck. It’s no shock that defenseman Dan Boyle was the lone goalscorer in the 2-1 loss that ended the Sharks’ season.

How This Season is Different

This is no longer the team that struggled to put pucks in the net. At even strength, the Sharks scored 161 goals this season, good enough for 4th in the league. Last year, the Sharks were a pathetic 25th in even strength goals (77). Whereas, Los Angeles went the opposite direction: dropping from tenth last season to 26th this year in the very same category. This offense will surely put pressure on a Kings team that remains largely intact from the one the year before.

The Sharks also pepper the net more often, yet they allow very few shots on their own. San Jose sat right in the middle of the pack on shots allowed per game with 29/game last season. This year, they have dropped it to 27.7 (good for 6th best). The defense has improved as well.

How the Sharks Can Beat LA

Todd McLellan needs to make one change to his current lineup to set his team up for the perfect Spring. The Sharks playoff picture looks brighter if they have more than two effective forward lines. Joe Pavelski must go back to the center of the third line. James Sheppard is not a third line forward. He can be a very capable fourth liner, but he cannot produce against more capable opposition.