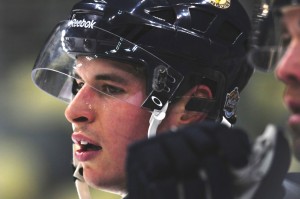 Love him or hate him (as a Flyer’s fan I lean towards the later), and even though he might not even be the best player on his own team, Sidney Crosby has been anointed the new face of the NHL since he was drafted in 2005.  It was an unusual draft year to say the least.  Due to a labor stoppage, the 2004-05 season would never happen.  In order to determine the order of the draft, a weighted lottery was used.  The lottery was based primarily on each team’s playoff appearances and lottery victories the previous four  seasons.  This system led to the draft being know as the “Sidney Crosby Lottery.”  As we all now know, the Pittsburgh Penguins won that lottery and picked Crosby first overall.  However, his rise to fame would occur before he was even drafted.

Sidney was born in in 1987 in Cole Harbour, Nova Scotia.  His father, Troy, was a goalie drafted by the Montreal Canadiens 240th overall in 1984, however, he would never make it to the NHL.   Sidney began playing hockey in his basement shortly after he could walk.  In fact, it has been said that he badly damaged the washer and dryer by repeatedly shooting pucks at it!   By the time he was merely two and a half years old, he and his father were skating once a week in a parent/child program.   The seed had been planted.

Crosby played many sports as a child.  He simply enjoyed the competitive aspect of it.  He played competitive baseball for many years in addition to hockey.

By the time he was six years old, his father began to notice the potential in his son.  Sidney was playing with kids three to four years older than him at that time and was not only holding his own, he was excelling.

At 13 years old, Crosby tried out for and made the Dartmouth Subways, a major midget league team made up of sixteen and seventeen year olds.  However,  Hockey Nova Scotia didn’t think it would be appropriate to have such a young child on the team so he was forced to go back and play for his local bantam team in Cole Harbour.  The family sued Hockey Nova Scotia but lost.

The following year, they would allow him on the Dartmouth Subways and he showed them the mistake they made the prior year by simply scoring 217 points to lead the team to a second place finish in the Air Canada Cup.  He also appeared on the Canadian Broadcasting Corporation’s Hockey Day in Canada (a special all day broadcast finishing with Hockey Night in Canada).  By this time he was already being constantly followed by the media who were already annointing him “The Next One.”  Sidney’s coming out party would be the National Championships that year where he scored 27 points in 6 games to lead Dartmouth to the finals.  Unfortunately they would lose.

Now seen as a future NHL star in the making, the Crosby’s were searching for any opportunity to improve Sidney’s skills.  They ultimately chose Shattuck-St. Marys, a hockey driven prep school located in Minnesota, with future NHL alumni Jonathan Toews and Zack Parise.  The Crosby’s thought it would be a great experience for Sidney, not only to play hockey outside of the media spotlight of Canada, but also to grow and mature as a person.  He would play the 2002-2003 season with Shattuck-St. Marys, leading them to the U.S. National Championship scoring 72 goals and 162 points in 57 games.

The following year, Crosby was selected first overall in the midget draft by the Rimouski Oceanic of the Quebec Major Junior Hockey League (“QMJHL”) and would make his debut in the 2003-04 season.  Crosby would waste no time making his mark scoring 8 points in his first exhibition game.  Throughout his first season in the QMJHL, Crosby would be named QMJHL Player of the Week  six times, Player of the Month three times, and Canadian Hockey League (“CHL”) Player of the Week three times.  At the conclusion of the season, with 54 goals and 139 point in 59 games, Crosby was named Player of the Year, Top Rookie and Top Scorer, the first QMJHL player to earn all three awards.

The 2004-05 season would see even more success for the young star.  This was the year of the NHL labor stoppage.  The World Hockey Association (“WHA”), was attempting to become a rival league to the NHL and was offering large contracts to current and future NHL’ers.  The league offered Crosby $7.5 million over three years, however, Crosby declined saying he wasn’t yet ready to leave juniors.  Good think he did, the league never name to fruition.

Crosby would return with Rimouski and dominate the QMJHL, setting the record for the longest undefeated streak of 28 games, and losing only 2 games in the entire playoffs.  Unfortunately, the team fell to the London Knights in the Memorial Cup Finals.  He would finish the season scoring 66 goals and 168 points in 62 games.

Over this time, Crosby also participated in two World Junior Championship Tournaments.  In 2004, Crosby would score 2 goals and 5 points in 6 games helping Canada to the silver medal.  The following year, Crosby returned to the Tournament and improved to 6 goals and 3 assists helping Canada win the gold medal.

The following year would see the NHL resume, and Crosby being selected first overall in the NHL Entry Draft by the Pittsburgh Penguins.  Crosby started off the year playing along side Mario Lemieux.  Unfortunately, Lemieux would be forced to retire a second time due to a irregular heartbeat. Lemieux’s influence on Sid did not stop there, however.  Crosby would live with the Lemieux family during the hockey season.  Among much criticism in the media, he was named as assistant captain mid-way through the season.  He would finish his rookie season with the franchise record for assists (63) and points (102) by a rookie, surpassing the previous records held by Lemieux.  He would finish sixth overall in league scoring.  Unfortunately for Sid, this guy by the name of Ovechkin took the Calder Trophy at the conclusion of the season.

Following his rookie season, Crosby would once more play in the World Junior Championships (“WJC”).  He would have success as an individual scoring a tournament best 8 goals and 16 points in 9 games, becoming the youngest player to ever win the WJC scoring title.  Unfortunately, despite his performance, Canada would lose to Finland in the Bronze medal game and fail to earn a medal.

Some other negative stories would follow him during the off season as well.  Over his rookie season, Sidney had built up a reputation as somewhat of a “whiner”.  I believe most of those aforementioned Flyers fans would agree with this one.   Although some hockey broadcasters would remind fans that he was still a teenager and the Gretzky had the same reputation when he first entered the league.

Crosby’s second NHL season would be even better.  He would finish the year scoring 36 goals and 120 points in 79 regular season games (Many of those unfortunately against the Flyers).  He would net his first hat trick (October 28, 2007 against the Flyers) and his first 6 point game with 1 goal and 5 assists (also against the Flyers a week later).  He would lead the league in scoring the rest of the year and be the first teenager to do so since Wayne Gretzky in 1980.  Crosby would also score another hat trick of sorts after the season, winning the Art Ross Trophy awarded to the league’s leading scorer, the Hart Memorial Trophy awarded to the league MVP, and also the Lester B. Pearson Award, given to the most outstanding player voted on by the Player’s Association.  After the season, Crosby was named the Penguins’ Captain, the youngest in NHL history.

How could Crosby top his sophomore season?

The 2007-08 regular season would be somewhat of a struggle for Sid “the Kid”.  He would battle a severe ankle injury which limited him to 53 games, scoring 72 points.  However, he would return at top form in time for the playoffs.  The Penguins would battle their way to the Stanley Cup Finals for the first time since 1992, losing to the Detroit Red Wings in 6 games.  Crosby would tie with Henrik Zetterberg of the Red Wings for the playoff scoring lead with 6 goals and 27 points.

All of this after only three years in the NHL.  As the Penguins work to keep the young nucleus they have together, it is a safe bet that Crosby will get another shot at the Stanley Cup, he is hoping sooner rather than later, so that he can go down in history with his heroes Wayne Gretzky, Mario Lemieux and Steve Yzerman as not only a great individual player, but also a champion.

For Crosby’s career stats, refer to the Internet Hockey Database

– Crosby is the youngest player to win the Lester B. Pearson Award, and the 2nd youngest to Wayne Gretzky to win the Hart Trophy.

– Recorded his first “Gordie Howe Hat Trick” on December 20, 2007 in a game against the Boston Bruins.  Crosby had a goal, an assist and a fight against Andrew Ference.

– Crosby is the youngest to score 100 points in NHL history.

– Crosby signed a three-year deal with Pepsi and Frito Lay of Canada after his rookie season.

– Among all the nick names and monikers thrown Crosby’s way over the years, one of the few true nick names he received was Darryl.  His teammates began calling him Darryl after he scored 8 points in his first QMJHL exhibition game, a reference to Darryl Sittler’s10 point game with the Toronto Maple Leafs.

We hope you enjoyed our Sidney Crosby Biography. Wan’t to read our Ovechkin Biography ?