The St. Louis Blues haven’t had a lot to be excited about in the 2018-19 season so far. But, they have a very special young player in Robert Thomas, the 19-year-old center who was their top prospect entering the season.

Thomas has had his bright spots and his struggles in his first season in the NHL, but overall, he’s beginning to show exactly why he received so much hype for his performance in the Ontario Hockey League. Having already passed his first major test, surviving his nine game NHL trial period, Thomas is establishing himself as a centerpiece of the Blues’ future.

But, would St. Louis consider breaking that momentum to loan him to Team Canada for the impending World Junior Championships? Let’s take a look at the pros and cons before reaching a final decision.

Why the Blues Would Keep Thomas

The reasons the Blues would keep Thomas are fairly obvious. He’s already become a significant part of their forward group, averaging almost 13:00 minutes a night despite regularly logging 10 or fewer in the first few weeks of the season. He has nine points in 24 games, and while he is a minus-4, that actually ties him for third among Blues’ forwards who have played twenty games or more. 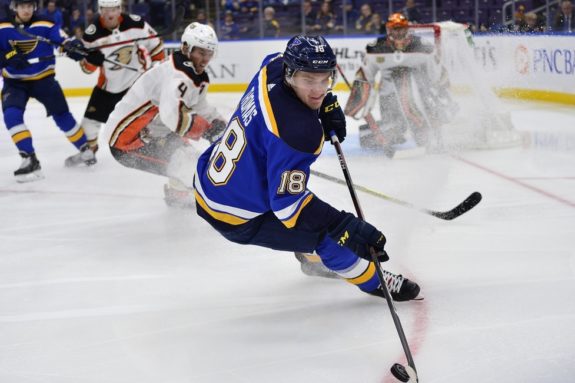 Thomas thinks the game at a very high level, and fans who watch from game-to-game can see him developing by the day. Of course, he still has his rough edges, but for a nineteen year old playing at the highest level, that is to be expected and forgiven.

Thomas is now a fixture in the Blues’ top three lines, and when he was asked recently whether the Blues might loan out Thomas for the WJC, Blues’ beat reporter Jeremy Rutherford was succinct in his response:

Rutherford is right: the Blues need Thomas right now. That is, if their primary concern is winning in the short term. With that said, perhaps there is still a reason for them to consider loaning him out.

Why the Blues Would Loan Thomas

The reasons for the Blues to potentially loan out Thomas are multiple. The simplest is this: it would be a great experience for the young player who is a fixture of their future. The World Junior Championships are a career highlight for young players, and it is an opportunity for the game’s top young stars to compete with their peers for national pride.

Beyond that, though, there are other things for the Blues to consider. First, with their forward core mostly healthy, save for the absence of Robby Fabbri, the Blues are deep at center, where Thomas would ideally play. With Ryan O’Reilly, Brayden Schenn, and Tyler Bozak ahead of him, Thomas has spent time on the wing of late. It’s not a nightmare scenario for the player, but the Blues need him to develop at center in the long run, and loaning him to Team Canada would give him a few weeks to play center at a very high level of competition. 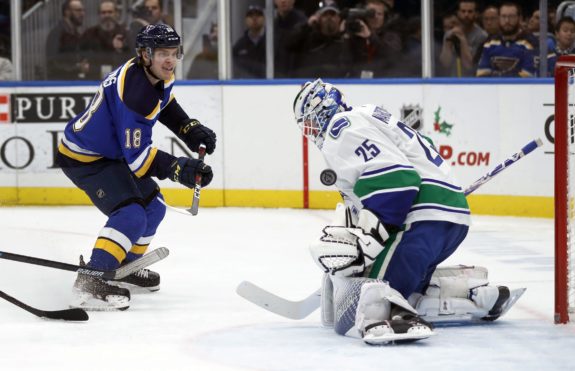 Beyond that, while Rutherford is indisputably right in saying that the Blues need him if they want to succeed in the short term, it’s a fair question whether that should be the Blues’ primary concern. With a dreadful start to the season and a first round pick that they will lose unless it falls inside the top 10 picks, the team may not be primarily concerned with winning in the short term.

St. Louis has too much invested in this year to truly “tank,” but if they’re honest with themselves, they should realize that winning big this season is an extreme long shot with the hole they’ve dug themselves. With that in mind, they should make the decision about loaning Thomas independent of how it affects their chances of winning or losing in the short term. If it’s the best decision for his development as a player, they should bite the bullet and send him to Buffalo.

The Easy Decision or the Right Decision?

It seems more likely than not that Thomas will stay with the Blues rather than being loaned to Team Canada, but it may not be the right decision. A few weeks in Buffalo might be great for his development at a relatively minor cost to his parent club. Given his age, his experience, and his level of talent, Thomas would surely be a leader on his national team, cultivating an attribute the Blues desperately need right now.

It is easier for the Blues to keep Thomas around during the WJC, as they’ll have nothing to explain to fans who love watching him and expect the team to be competitive this year. But the easy decision isn’t always the right decision, and this might be one of those times.

The World Junior Championships will be an exciting few weeks whether or not Robert Thomas is there. Stay tuned to the Hockey Writers for more coverage of the Blues players at the tournament and all things WJC.