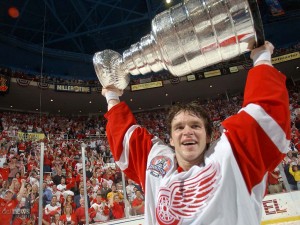 She stands in at 35.25 inches high and 35 pounds of silver and nickel alloy. She is the Stanley Cup, perhaps the most prestigious trophy in all of professional sports. Hockey players give their bodies all throughout the season just for a chance to hoist it high in the air at the end.

The Stanley Cup playoffs are perhaps the most excited and physically grueling playoffs in all of sports. Players are more aggressive and more physical and play with a certain bravado that we don’t see in the regular season. The forward that was a little coy in the regular season now throws their weight around. Injuries that would keep most players out are brushed off as they play through the pain.

Playing Through the Pain

A couple seasons back, San Jose Sharks captain Joe Thornton played with a separated shoulder and a broken finger. Ryan Clowe needed help to put on his sweater and tie his shoes after separating his shoulder. Clowe only missed one game before playing the rest of the Sharks’ postseason. Just last season, Ilya Kovalchuk played through a back injury to help lead his New Jersey Devils to an unexpected Stanley Cup finals berth.

No matter the injury, players, for the most part, suck it up and play through the pain. Players in other leagues would be out for the remainder of the playoffs, but not in the NHL.

The fans make up perhaps the most intense crowds during the playoffs. Whether it be the Phoenix Coyotes’ ‘White Out’, the Calgary Flames’ ‘Sea of Red’, or the octopus throwing in Detroit (started as a playoff tradition), hockey fans have nothing on baseball fans. I like baseball and all, and the postseason baseball can be exciting, but the fans are a lot more electric in the postseason.

Players seem to want this award more than the fans do. When the war is over and the Stanley Cup has been won, the players look like excited children when they finally lift that 35 pound trophy over their heads. A lasting image in Stanley Cup lore is a euphoric Mark Messier shaking the trophy with Gary Bettman still holding it

The sheer emotion that comes out of these mountains of men and tough as nails players in incomprehensible. The Stanley Cup means something to these guys and that is something that the other sports leagues have lost over the years. It doesn’t matter how many Stanley Cups someone wins, it is still a highly emotional and jubilant celebration every time.

It’s hard to believe that a trophy can make someone so emotional, but after all the work they put in, you can see why someone would get so emotional.

The playoffs can also bring some venomous series with a lot of chippy play and words being said, but at the end they always shake hands at the end.

It may hurt a lot to lose a series and your shot at a Stanley Cup, but these players know how hard it is to win. They are part of a special fraternity of players that are warriors and battle every game for the Cup. Being gracious in victory and defeat is something so incredibly special in the game of hockey.

Sure there are some contentious moments in the handshake line, like last season’s Kings-Coyotes Western final and Martin Brodeur’s snub of Sean Avery in 2008, but more often than not, it is a tremendous display of sportsmanship that we don’t see very much in the sporting world.

The only thing more exciting than playoff hockey is overtime playoff hockey. The NHL is the only major sports league in North America to have a sudden death overtime format and I for one love it.

The NFL used to have a sudden death format but changed the rules recently to allow both teams a shot at scoring. The MLB postseason extra innings can be exciting, but not if it’s a blowout in extra innings. The NBA? Forget it, it’s ho-hum. Not in hockey however. One goal and you are done, that’s it. The only thing more exciting than overtime playoff hockey is a Game 7 sudden death.

Heroes are made in overtime, which leads me to my next topic.

Remember that quote from “The Sandlot”, “Heroes get remembered, but legends never die”? It’s rings all the more true during the playoffs.

Hall of Famer Steve Yzerman is still remembered to this day for his heroics in Game 7 of the Western Conference Semi-finals in ’96. Yzerman showed the Red Wings fans that he could lead this team to victory, although defeated by the eventual champion Colorado Avalanche, and won the Stanley Cup the next two seasons.

The aforementioned Mark Messier guaranteed that his Rangers would win the next two games and defeat the rival Devils. He followed through on his promise and defeated the Devils and the Vancouver Canucks to win the Stanley Cup, the first for New York in 54 years. Messier is still a hero to this day in New York because of that magical ’94 playoffs.

Montreal Canadiens goaltender Patrick Roy became a hero and a legend in waiting in his rookie season. Roy stood very tall in net despite his lack of experience, but was able to make save after save to win the Cup for Montreal and cement his place in Canadiens lore.

What heroes will be made this season? Only time will tell.

With all the emotion, grit, and sportsmanship of the Stanley Cup playoffs, I for one am excited. Every team starts with a clean slate and a chance to hoist that beautiful silver trophy high up into the sky. Bring on Tuesday for the first round!