But Yzerman is quietly re-signing a handful of the team’s depth players and bringing in others who could be wearing a Lightning uniform sooner than later — and in meaningful roles.

The latest contract came Wednesday when the team announced they’d signed Matthew Peca to a one-year, two-way deal. The 24-year-old forward made his NHL debut with the Lightning in 10 games last season. He was also an important piece of the Syracuse Crunch in their run to the Calder Cup Final, tallying 14 points in 22 contests.

The team also re-signed defenseman Jake Dotchin to a two-year, one-way contract Wednesday worth $812,500 annually. Dotchin, 23, made his NHL debut with the Lightning last season and paired with Victor Hedman to add considerable balance to the team’s defensive corps.

These are just a couple of the moves Yzerman has made as he goes about keeping the franchise’s depth at the NHL level and in the minor leagues.

With so many questions for Yzerman entering this offseason, lost in the shuffle outside of the organization was finding ways to hold onto some of the franchise’s role players.

Yzerman was able to do just that with the re-signing of Cory Conacher and Yanni Gourde.

Conacher signed a two-year deal that’s one-way in year one and two-way the next, paying $650,000 at the NHL level. Gourde’s two-year, one-way contract is worth $1 million annually.

The undersized forwards each bring a unique package of speed and work ethic to the lineup which has helped them have success in professional hockey despite each taking the hard road to get there.

Conacher returned to the franchise last summer and made his mark with the Crunch in the regular season, pacing the team with 60 points in 56 games. He also saw 11 games of action with the Lightning and tallied four points.

Gourde got his second taste of NHL action after a two-game look in 2015-16 and made the most of it last season. After playing a couple games in December, he was recalled to the NHL club where his eye-opening performance (eight points in 18 games), including a four-game point streak, helped play a big part in the Lightning’s push for a playoff spot. More important than his point production, though, was the energy he brought to the lineup and his contributions defensively and on the penalty kill.

Conacher and Gourde were at their best in the postseason with the Crunch. They went 1-2 in scoring, tallying 28 and 27 points, respectively, in 22 games.

But just as meaningful to the franchise is the fact that both players are excited to be a part of it. 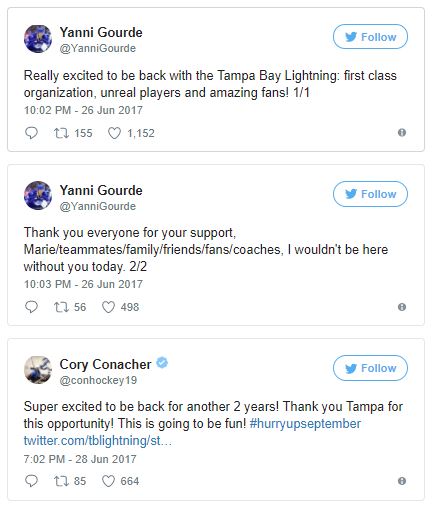 Adding an Enforcer in Alex Gallant

The one-year, two-way contract Alex Gallant signed on Saturday slipped under the radar as bigger names like Kunitz and Girardi landed in Tampa Bay.

“I was told there are not many other guys in the organization who play the enforcer’s role or anything like that, so there is an opportunity there,” Gallant said after signing with the Lightning, according to the Journal Pioneer. “The rest will be on me.”

Gallant has battled his way through the minor leagues after going undrafted during his draft year.

The 6-foot, 177-pound forward has spent parts of four seasons in the Southern Professional Hockey League, ECHL and American Hockey League. He hasn’t seen action in the NHL yet but in 56 games over the last two seasons with the San Jose Barracuda (AHL), he compiled 248 penalty minutes.

This willingness to drop the gloves will be beneficial to the franchise if he can crack the NHL lineup and in the AHL — especially after heavyweight defenseman Luke Witkowski signed with the Detroit Red Wings in free agency.

Other Pieces to the Puzzle

Yzerman has also added other players to help fill out the Syracuse roster heading into the 2017-18 regular season.

Gabriel Dumont inked a two-year deal that mirrors Conacher’s and keeps him with the franchise. The 25-year-old forward was a gritty, depth player for the Lightning in 39 games last season, while also being effective in the faceoff circle.

Mat Bodie figures to add to the Syracuse blue line after signing a one-year, two-way deal. The 27-year-old defenseman helped lead the Union Dutchmen to their first NCAA national title in 2014. He went undrafted and has spent the past three seasons in the AHL.

Yzerman also signed 36-year-old goaltender Michael Leighton to a one-year, two-way contract. Leighton played most this past season with the AHL’s Charlotte Checkers, posting an 11-7-3 record in 23 games, but also saw four games of action with the Carolina Hurricanes.

Leighton brings a veteran presence between the pipes for the Crunch. He will help lead rookie goaltender Connor Ingram after the departure of Mike McKenna in free agency and the trade of Kristers Gudlevskis. The Lightning also signed 29-year-old netminder Nick Riopel to an AHL contract on Wednesday.

Another addition to the franchise’s stable of blueliners is 29-year-old Jamie McBain, who signed a one-year, two-way contract on July 1. He tallied 43 points in 64 games with the AHL’s Tucson Roadrunners and went scoreless in three games with the Arizona Coyotes this past season.

The future of forwards Michael Bournival and Tye McGinn, who received qualifying offers from the club on June 26, is undetermined at this time.

Dumont is the most likely candidate in this group to see meaningful time with the Lightning next season, while the others figure to help the Crunch as they seek to make another deep postseason run or fit elsewhere into their minor league system.

After the announcements of contracts for Peca and Dotchin on Wednesday, Yzerman’s full attention turns to restricted free agents Tyler Johnson and Ondrej Palat. The Lightning now have just under $13.7 million in remaining cap space, according to Capfriendly.com.

One of the most important aspects in each of these contracts will be their term.

Johnson has been an important piece of the team’s roster the past four seasons but has been limited to just 135 games over the previous two years because of injury. Palat is one of the most effective two-way forwards in the league but has also been slowed by injuries, playing just 137 games in that same span.

Each player is arbitration eligible and must file for arbitration by 5 PM ET on Wednesday. Palat and Johnson filed, according to the Tampa Bay Times’ Joe Smith.

But the thought process that goes into inking Johnson and Palat to new deals doesn’t stop there.

Nikita Kucherov enters the second season of his three-year, $14.3 million bridge deal. His team-friendly bridge deal helped keep the Lightning under the cap heading into last season but don’t expect the same goodwill next time around.

Especially not after Monday, when the Washington Capitals re-signed forward Evgeny Kuznetsov to an eight-year deal that pays him $7.8 million annually. Kuznetsov has never scored more than 20 goals in three full NHL seasons, while Kucherov has scored 29, 30 and 40 goals the past three.

It’s certainly an important consideration for the Lightning as Yzerman and his staff go about addressing their needs, while also adding depth, ahead of training camp in September.

Steven is a lawyer and writer with a passion for the game of hockey. He’s the Lead Writer covering the Tampa Bay Lightning with THW. He’s also been press credentialed through the Lightning since 2016. His work has been published at The Fourth Period, LightningInsider.com, Bolt Prospects, The Sports Daily Network, U.S. College Hockey Online and College Hockey News. He’s had radio appearances on TSN 690 in Montreal, Lightning Power Play Live and multiple podcasts to give insight and analysis on the team. He can be reached on Twitter @StevenDiOssi and by email at sdiossi@gmail.com.