After a long and eventful off season that saw regime change, roster moves and new prospects added to the system. Vancouver Canucks hockey finally begins this Friday on September 12th at the Young Stars tournament. The Young Stars tournament is a series of games played by the prospects of the Vancouver Canucks, Calgary Flames, Winnipeg Jets and Edmonton Oilers before entering each team’s professional training camp.

This tournament is for each organization to get a feel for their prospects and to give prospects a taste of playing in a NHL system. The tournament will be a round robin tournament between the four Canadian teams from September 12th to September 15th in Penticton, British Columbia.

“We are excited to host the Young Stars Classic, now in its fourth year, in beautiful Penticton, B.C.,” said Trevor Linden, President, Canucks Sports & Entertainment. “This is an excellent tournament to develop and assess our prospects in competitive game situations. We have amazing fans in the Okanagan and look forward to sharing an NHL experience with them while celebrating the rich hockey history of Penticton.”

The State of the Canucks Entering the Tournament

The Vancouver Canucks find themselves in the middle of a rebuild or a “re-tooling” depending on who you ask. The team has made a conscious effort to accumulate young skilled forwards through drafting and trades over the last several years. The dividends show as the Canucks enter this tournament boasting six first round picks in their forward group. This group of forward prospects is arguably the best the Canucks have ever had.

As potentially exciting as the Canucks’ forward group is, the team has neglected their defensive group having not drafted a defenseman in the first round in ten years nor a defenseman in the second round in seven years. The Canucks have a few promising defensemen playing in this tournament but few if any threats to make an immediate impact in the NHL. Unfortunately two of the Canucks’ best defense prospects in Nikita Tryamkin and Ben Hutton won’t be able to participate due to their professional and collegiate commitments.

The Canucks have done a good job in recent years of acquiring and developing NHL caliber goalies. Currently the Canucks possess several talented young goaltending prospects in Eddie Lack, Joacim Eriksson, Joe Cannata and the recently drafted Thatcher Demko. However due to collegiate and pro restrictions the Canucks enter this tournament with two invite goaltenders who have shown flashes of potential in the Western Hockey League.

The Canucks’ roster for the Young Stars Tournament. 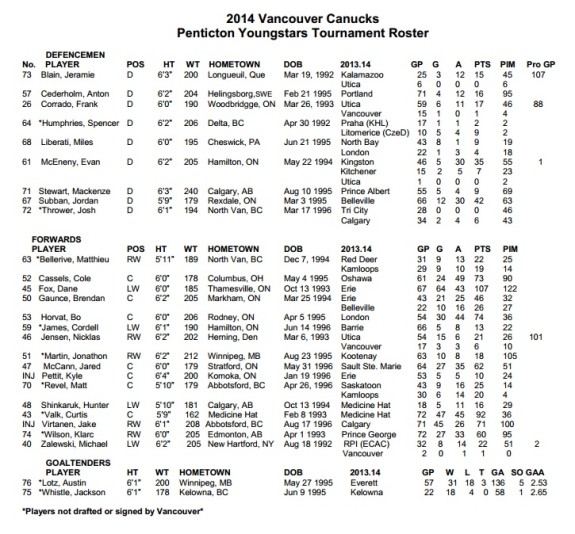 CONTINUE TO PART TWO OF THIS ARTICLE

Bubba Lackey enjoys writing about hockey. Bubba Lackey is a doctor of journalism and a master of the Anaconda Vice. You can read more of Bubba Lackey’s ramblings at http://www.bubbalackey.com