The short answer: win five games. Since the lockout the average number of points it’s taken to secure 8th place is 92.5 points, right now the Caps are on pace for 89 points, but are capable of 94 points if they win all five remaining games. After dropping a devastating loss at home to the Sabres on Tuesday the Caps have entered must-win territory. Here’s the 5-step formula to making the playoffs: 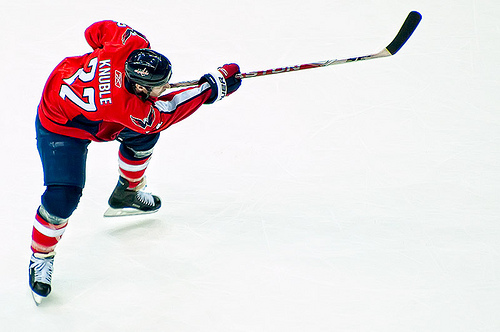 The TD Garden, like any Boston sports venue, isn’t any easy place to play, but the Caps will have to steal two points from the Bruins on Thursday night when Boston will be trying to clinch a playoff spot. This is a ‘something game’ for both teams and for the Caps, who have size on their side, should be looking to play the rough and tumble game against the Bruins. In the season series the Caps have won two of three games.  The previous meetings between these clubs have been high-scoring affairs, but for the Caps there’s good news in net. It appears Tomas Vokoun will be ready to go for Thursday night. “I feel like I can play 100 per cent and hopefully give a good game,” Vokoun said. The Capitals have proven they can beat the Bruins, but can they do it when it really counts?

Caps must beat Habs at home to stay alive

The Caps will be facing a team that is searching for something to fight for, but the unpredictability of a team in a spot like the Canadiens means the Caps still must bring their game. While it’s true anything can happen, the Caps must defeat the least in the East Canadiens who are 28th overall. The Caps will be hoping to sweep the season series against the Canadiens who have only scored once in their three previous meetings. The Caps have scored 10 goals in three games when playing Les Habitants. The game will be held at the Verizon Center to boot, where the Caps have the third best home record in the conference. If I haven’t driven it home already, it would be a shame if the Caps lost this gimme game.

The season series has been hard fought with three of the previous five matchups between these teams needing an overtime to settle the score. There’s no better time than now for the Caps to get their first road win against the Bolts this season. The Lightning, worse off than the Caps, are all but eliminated from the post-season situated firmly on the outside looking in. In next week’s game against the Bolt the Caps must get over what’s been their crux all year: their best players not being their best players. When playing the Lightning Ovechkin and Backstrom have two points combined in five games, whereas St. Louis and Stamkos have 10 points combined.

It’s hard to believe that just two weeks ago the Caps were one point away from catching the Panthers, leap frogging to third place overall, and having home-ice advantage for the playoffs. Now, with five games remaining, the Caps are five points behind the Panthers in 9th place having gone 2-3-2 down the stretch, whereas the Panthers have gone 4-3. The season series has gone in the favour of the Capitals who have won three of five against the Panthers. Good news for Caps fans: they’ve won all their homers in the season series and have a chance at another next week.  The Panthers have yet to score at the Verizon Center being blanked in both visits this season. The southeast division title will be on the line in this one as the Panthers look to secure their already confident lead on the Capitals. This would be the first southeast division title that hasn’t been awarded to the Capitals in four years, but its not mathematically out of the equation. 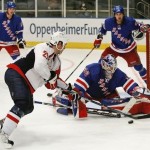 Capitals visit Madison Square Garden to finish out the season

The biggest test will be left for last and if all goes well, it may not be the last time they see the Rangers. If the Caps do make the playoffs they will almost certainly be facing off against the top seeded New York Rangers.  The Rangers have had the advantage in the season series beating Washington twice in three outings. The Caps should hope Vokoun will be up for the challenge in this one, seeing as he has two shutouts and a .922 save percentage in his career against the Rangers. He will have to be good too as the Rangers have outshot the Caps by 23 shots on net in the season series. Also watch out for Caps D-man John Carlson who has five points in three games against the Blue Shirts this season.

There are a lot of variables in how the season standings will end, but with only five games left nothing is set in stone. To reach 94 points the Caps need to win each one of these games. The sixth seeded New Jersey Devils only need one win to achieve that total, tops in the southeast division Panthers will reach 95 points by simply playing .500 hockey, the seventh-place Senators need to win three of five to reach 94 and the Sabres in the final spot need to go 4-5. If the Caps fail to win a majority of their next five games they will be forced to do a lot of out-of-town scoreboard watching.