“Italy an ice hockey country? You must be kidding!”
Well, I’m not, dear friends of mine. In this article I will tell you something about Italy’s top league, called (as in most of Italian sport championships), “Serie A”, which started in 1925. 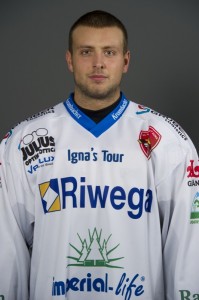 Alexander Sullmann Pilser, one of the most prominent Italian ice hockey players of the new generation. (hc-neumarkt.com)

We have pucks, not pizza

Known as being a sunny land, full of beautiful landscapes, beaches and historical treasures, Italy is also an Alpine country, sharing borders with hockey-mad Austria, Switzerland, and Slovenia. It must therefore not be a surprise that its hockey heartland lies in South Tyrol, a predominantly German-speaking region where the Italian population is, in fact, a minority.
You may probably know HC Bozen, a team coming from the South Tyrolean capital city, Bolzano, which last year won the Austrian league final against Salzburg (which, anyways, retains the exclusive right of calling itself “Austrian champion”) in its first year of participation: before crossing the border, it was Italy’s most successful hockey machine, having won nineteen scudetti (that is, a small shield bearing the Italian flag colors which the winner of the championship will wear on its jersey the following season, as it also happens in soccer) between 1963 and 2012.
After Bozen we find Cortina, a mountain resort where Ladin, a Dolomitic language similar to Switzerland’s Romansh, is spoken, which won the championship fifteen times (eight during the Sixties). Milan, another ice hockey powerhouse, collected a huge number of strong teams, totaling thirty-two championship wins: despite this, many of these victories were obtained by different clubs, which folded or merged very frequently, the most successful being HC Milano with fifteen wins (under various names). Another club, called AS Milan Hockey, was even owned by Silvio Berlusconi, Italy’s former Prime Minister (which, at that time, owned a giant multi-sports club: the most famous part -and the only one still in existence- of it is the association football club AC Milan).
The “golden era” of Italian hockey was undoubtedly the first part of the Nineties, when, thanks to the 1994-95 NHL lockout, many talented players came to play, though briefly, in the Peninsula: this is the case, for instance, of Jari Kurri (who signed with AS Milan) and Jaromír Jágr (who played six games wearing Bozen’s colors; more recently was Niklas Hjalmarsson the choice of the South Tyrolean club for the 2013 lockout). In addition, many clubs triumphed in European competitions, like the Six Nations Tournament, won by Bozen in 1995, the IIHF Federation Cup, won by Varese in 1996, and the Alpenliga, which also comprised Austrian and Slovenian teams: AS Milan, Alleghe, and Bozen won its first three editions respectively.
After a decade of crisis, with many teams folding or being relegated to second-tier leagues, new powers began to emerge: the most important of them is probably Asiago, a club coming from a small town in the Venetian uplands, which won four championships starting from 2001; but many other teams coming from South Tyrolean villages (and when I say villages, I really mean it: Kaltern and Eppan, for instance, are two minuscule towns on the same, well, road: the so-called “Weinstrasse” or “Wine Road”) started to rise, like Pustertal/Val Pusteria or last year’s winner, Rittner Buam, which was coached by Anglo-Canadian Rob Wilson, now co-trainer of the Nürnberg Ice Tigers in the DEL.

The last remodeling of the league came with the current season, when the number of teams was extended to twelve, as five teams, all of them coming from South Tyrol, were forced by the Italian federation to withdraw from the Inter-National League (which was, de facto, the second tier of the Austrian championship including Italian and Slovenian teams): by doing this, the league comprises now two Venetian teams, one coming from Piedmont, one from Lombardy (obviously from Milan!), and eight from the German-speaking districts (to be fair, I must add that in Asiago a German dialect is also spoken by part of the population).
The first part of the season sees the teams competing twice against each other; then, retaining their points, they are divided in two groups of six teams, each based on their placing in the previous phase, with two games against each other team in the same group and one inter-divisional game against each of the other clubs. The five best teams of the first group move then directly to the quarter-finals, while the last one plays against the penultimate team of the second group (the last one of the latter ends here its season); a qualification round for the first four best teams in the second group is also provided. Quite complicated, isn’t it? Well, after this rollercoaster of a regular season come at last the playoffs, played in a best-of-seven mode. The final game will be, in fact, played starting from tomorrow, when Asiago (which won the regular season) will meet Rittner Buam (which means, in the local Bavarian dialect, the boys from Ritten), last year’s reigning champions: Ritten was, anyways, previously defeated by Pustertal in the Coppa Italia final, a cup tournament that runs parallel to the regular season.
This very complicated formula won’t, in my opinion, attract many audience besides the already existing die-hard fans: despite a weekly game being broadcasted on the national TV channel, the biggest arena of the league, located in Milan, has a capacity of just 4000, and doesn’t regularly sell out. Also, foreign players are starting to leave the competition to move to other, more important leagues (for instance in Switzerland), but this will, on the other side, allow many younger players to prove their worth on the ice rink, as it happened this season: small realities like Asiago, Ritten or Sterzing already demonstrated they can build great youth teams.