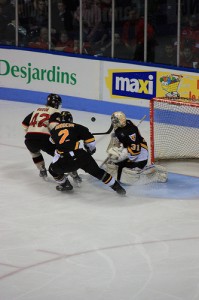 This is my mock draft, not to be confused with The Hockey Spy`s Draft Rankings. In the mock draft I take a stab at who I think NHL teams will pick with their respective draft picks. The draft rankings were my thoughts on the best player available at each position. The following notes put my rankings in perspective compared to other rankings out there.

With respect to scouting services such as CSB, Gare Joyce states in his book ‘Future Greats and Heartbreaks‘, CSB’s preliminary  and mid-season ranking are of more use to professional NHL scouts. A quote from Blue Jackets’ (at the time) head scout Don Boyd sums up the value of CSB rankings quite nicely:

“It’s like a road map for us. That is, a list to cherry-pick from – names to chase down and see. The final list is useful for the media and the fans, but by the time it’s issued NHL teams are more concerned about the lists offered up by their own scouts in the field.”

The following is Round 2 of the Mock Draft.  Please click on each individual player, for my detailed Full Potential Prospect Profile.  There, you will notice some differences between my rankings versus the mock draft.

*Jakub Silfverberg`s link is not my profile as I rated the Top 60 only.

4 thoughts on “The Hockey Spy`s Mock Draft Round 2”