The Montreal Canadiens’ need for another scorer went from bad to desperate. With Max Pacioretty out for approximately 12 weeks with a knee injury suffered during an off-ice workout, he might be ready just in time for the season opener. Pacioretty is heavily relied upon in Montreal for leadership, scoring and on the penalty kill.

Fans have grown impatient with GM Marc Bergevin who has yet to grab a scoring forward, especially with the likes of Phil Kessel, Brandon Saad and TJ Oshie all being moved. Does it mean the team could look at someone like Eric Staal who is an unrestricted free agent next summer with Patrick Sharp now off the market?

Or do they try to pry one of Edmonton’s young forwards away? Even if Pacioretty is ready in time to start the season, the thought of losing the team’s top forward is a scary scenario for the Habs.

Should Montreal go after Eric Staal?

Pacioretty has shown to be a quick healer when it comes to injuries so if he comes back earlier than anticipated, no one would be surprised. However, no matter how you spin it, the Habs need more offense. Scoring 1 or 2 goals a game and relying on Carey Price to do the rest is not a recipe for success. Making trades are rarely easy and Bergevin is loathe to give up top prospects in deals.

The Habs traded Brandon Prust for Zack Kassian but he is still a wildcard. He could glue it all together and become the power forward the team needs or he could easily continue to be the wildly inconsistent player he has been since turning pro. 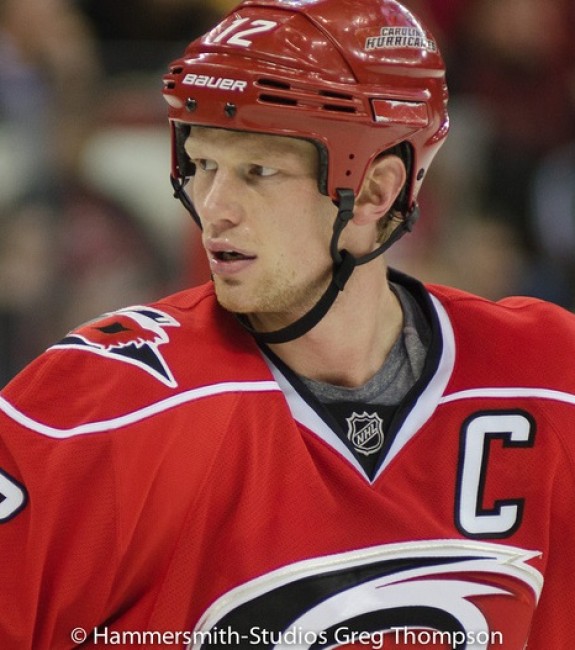 Eric Staal’s name has been in trade rumours for awhile and the Habs have been discussed as a potential landing spot for Staal. Staal has been a Carolina Hurricane for his entire NHL career and is a member of the Triple Gold club. As their franchise player, the Carolina Hurricanes will not give him up for scraps.

Staal still puts up decent numbers and his size would be valuable on a smaller Montreal team. He can play centre or wing and would automatically become the team’s biggest offensive threat up front other than Pacioretty.

Even though Carolina is going through a rebuild, they could want to keep him as a leader for the young guys coming up.  It will take a significant piece or two to make it a deal. Staal would be an interesting short term fit but he is getting older and it doesn’t seem worth it to give up a top prospect like Nikita Scherbak, Michael McCarron or Noah Juulsen.

The Habs could easily go into the season hoping one of their prospects can make the jump. Scherbak and McCarron would fill some immediate needs but their lack of experience the professional level could mean time in the minors first. Charles Hudon, Sven Andrighetto and Daniel Carr all have offensive skills but they aren’t projected to be big scorers at the NHL level and considering how hesitant head coach Michel Therrien is when it comes to playing youngsters, the odds aren’t in their favour unless their defensive games are to his satisfaction.

"The way I look at it is nobody can stop me when I’m going full speed and nobody can take the puck off me. That’s the way I think." McCarron

Warning to the Montreal Canadiens

Even though Pacioretty will likely be ready in time for the season, the injury is a reminder to how valuable he is. He is the only consistent scorer on the team and eats up a lot of minutes beside Tomas Plekanec on the penalty kill. The organization likely isn’t panicking over this, but the fact remains the team needs a scorer with or without Pacioretty. Goal scorers are valuable and they aren’t easy to find. The Montreal Canadiens need players who can score goals and Pacioretty’s injury is like a sign from the hockey gods telling them to address the problem before it gets worse.