Early in the second period of Game 5 of the Stanley Cup finals, Boston’s Nathan Horton hooked Chicago’s Michal Handzus and the Blackhawk forward tumbled to the ice.

Both players ended up going to the box on the play. Horton, for his appropriately called hook, and Handzus for the dive — negating what would have been a power play for the Chicago Blackhawks.

Handzus was penalized under rules 64.1 and 64.2 in the NHL rulebook, a pair of rules that are intended to curb embellishment and limit players from flopping to draw the man advantage.

64.1 Diving / Embellishment – Any player who blatantly dives, embellishes a fall or a reaction, or who feigns an injury shall be penalized with a minor penalty under this rule.
A goalkeeper who deliberately initiates contact with an attacking player other than to establish position in the crease, or who otherwise acts to create the appearance of other than incidental contact with an attacking player, is subject to the assessment of a minor penalty for diving / embellishment.
64.2 Minor Penalty – A minor penalty shall be imposed on a player who attempts to draw a penalty by his actions (“diving / embellishment”).

In general, diving isn’t too much of an issue in the NHL thanks to the aforementioned rules. In basketball and soccer — two sports that have a problem with diving — there isn’t a well-worked system to curb constant divers. 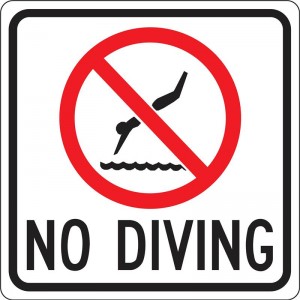 In soccer divers may be issued a yellow card — a warning — and in the NBA divers or floppers can be fined by the league office after the fact. But the NHL is the only league that has a somewhat effective system in place to punish the offender on the spot and penalize their team.

But the NHL can take the rule a step forward.

Prior to the 2012-13 season (or just 2013 season, due to the lockout), players called for a “Divers list” to embarrass frequent offenders. Players wanted this list distributed league-wide to players, coaches and officials to prevent prior offenders from getting any benefit of the doubt.

Whether the embarrassment of being labeled a “diver” stopped any individual from flopping remains to be seen. However the enforcement and wording of rules 64.1 and 64.2 could further eliminate the problem.

Under the current enforcement of the rule divers rarely spend two minutes in the box by themselves. More often resulting in a four-on-four situation, like the Horton-Handzus situation in Game 5.

Instead of two minutes of four-on-four action, Boston should have been on the power play after Handzus’ dive — courtesy of a double minor.

In particular I’m thinking of this Ryan Kesler somersault from last season.

What do you think? Should divers be given a double minor, let us know in the comments.