Austin Czarnik is a rookie who plays for the Boston Bruins, signing an entry-level contract on Apr. 1, 2015 as a free agent. Last year, he played for the Bruin’s AHL-affiliate team, the Providence Bruins, and before then he was playing for Miami University (Ohio) for four years (2011-12 to 2014-15), serving as team Captain for the last two seasons.

Although his surname originates in Poland, Czarnik was born in Missouri and turned 24-years old two weeks ago. Making his NHL debut on Oct. 13, 2016, against the Columbus Blue Jackets, he scored his first NHL goal during his third NHL game.

Czarnik may be one of those guys who goes unnoticed for a while before he “comes out of nowhere” and turns heads his way. He falls under the small-in-size and fast-on-his-feet category, one of the league’s most recent rising trends. This idea that he may even have a breakout year holds quite a bit of merit. A statistical analysis of his progress as an NHL rookie so far this season sheds a lot of light on just how much he’s truly developing.

Firstly, Czarnik’s event’s are improving in all the right ways… for the most part. Czarnik’s average ice-time-per-games played has gone down to 12:58 per game in December, from 14:02 per game in November. This may help him to play more efficiently, though. Czarnik is one of those rookies who incurs more events when he’s played with shorter and more frequent shifts (versus fewer, longer shifts). 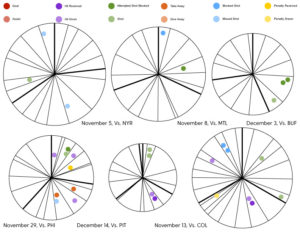 Czarnik is the most active during first periods, as the majority of events occurred during this period (39 percent). He takes a shot on goal every 9:40, and since his NHL debut in October, this time frame has been steadily narrowing (every 8:53 in December). Czarnik is also scoring more goals per shots on goal (from a goal scored every 21 SOG in November, to every 9.5 shots on goal in December). Furthermore, the type of shot Czarnik chooses to execute at any given time reveals patterns about his role and corresponding priorities.

Austin Czarnik on his goal + a strong night for his line in #NHLBruins 5-2 win over Columbus: pic.twitter.com/fXkYZsA07B

The slight majority (16 percent) of Czarnik’s shots were taken between 16 to 20 feet from the net and 70 percent of these shots occurred during first periods. Half of total slapshots occurred during first periods as well, and this shot type has the longest average distance and the highest rate of getting blocked (18 percent of slapshots were blocked).

Statistically, more shots on goal tend to increase attempted shots blocked but on the contrary, Czarnik’s shots are more likely to get blocked when a greater distance is placed between himself and the net.

Like many other rookies, Czarnik uses slapshots and snapshots interchangeably. He’s executed 10 slapshots to date and half have occurred during first periods. However, these five slapshots were either missed or blocked. He’s also executed a total of 10 snapshots to date and 60 percent occurred during first periods. None have missed the net and only two have been blocked.

During second periods, Czarnik’s focus shifts to gaining puck possession. Not only have his takeaways per minute played increased since November (by 26.5 percent), the majority (58 percent) occurred during second periods and he’s least likely to incur them during first periods (only eight percent of takeaways occurred during first periods). Furthermore, his takeaways incurred per minute played is steadily increasing over time (from every 42:05 in November, to every 33:44 in December).

Czarnik also plays with more physicality during second periods, as this is when the majority of hits are given (54 percent). Over time, this has increased (from every 105:13 in November, to every 28:07 in December).

Czarnik has significantly decreased his giveaways since the beginning of the season (from once every 42:05 in November, to every 77:20 in December). Furthermore, half have occurred during third periods. He’s also consistent in his execution of blocked shots each period. Over time, though, he’s blocking fewer shots (from every 19:08 in November, to every 38:40 in December). This likely has to do with going through a small role change and playing a more offensive role in the system.

To sum it up, Czarnik is steadily seeing more ice time as he continues to play in the NHL. He’s also shooting on goal more often (especially during first periods) and as a result, he’s scoring more goals. Although this is a good sign of progression, he’s also receiving more missed shots.

His shot of choice is the wrist shot and that’s what he’s using to score the majority of his goals with. However, he may be working on his slapshot but is seeing more improvement with his snapshot. During second periods, Czarnik’s focus shifts to gaining puck possession and plays with more physicality. Although Czarnik is small in size, it does not make him prone to getting hit, which is not the case for Brayden Point, another rookie playing for the Tampa Blay Lightning. By the third period, Czarnik places his focus on setting up the lead scorer and has received the majority of his assists during this period. However, he’s also more likely to give away the puck during this period, as well as miss the net when he shoots on goal.