As the controversial debate over mandatory visors in the NHL continues to build steam, a new paper from Alberto Chong (George Washington University, Washington) and Pascal Restrepo (Massachusetts Institute of Technology, Boston) suggests that players who wear visors wind up with more penalties (stick tap: Freakonomics):

We provide evidence of the Peltzman effect by tracking the professional path of each hockey player that ended up in the National Hockey League from 2001 to 2006. We take advantage of the fact that visor use has not always been compulsory throughout a player’s career, which allows us to compare the change in behavior of users and non-users of visors when they are forced to use them. We find that whereas the average penalty minutes per game is 0.8, visors cause a substantial increase of 0.2 penalty minutes per game. Players become more aggressive when forced to wear a visor, partially offsetting its protective effect and creating potential spillover effects to other players.

The authors go on to raise the problems with seat belt laws as a frame of reference for their study, a fitting parallel in studying the way perverse incentives shape individual behavior.

A common critique of seat belt laws goes something like this (emphasis added):

Critics of seat belt laws have contended that they alter driver behavior in ways that increase the hazards for other users of the streets and highways. In particular, some drivers wearing seat belts may feel more assured of surviving an accident, and hence tend to drive more aggressively, thus raising the risk of collisions with other vehicles and pedestrians.

In the early 1970s, a few challenges to the presumed safety benefits of increased auto safety regulations appeared in lightly read academic journals. In a 1970 issue of Applied Economics, L. B. Lave and W. W. Weber suggested that mandated safety devices (seat belts, better bumpers, collapsible steering wheels) might lead to faster driving that could offset the safety gains. In 1975, Sam Peltzman’s “The Effects of Automobile Safety Regulations” in the Journal of Political Economy hypothesized that safer autos would lead to more aggressive driving that would endanger other users of the roads.

This earlier research has been mostly ignored or dismissed in favor of adherence to more simplistic research that, unsurprisingly, proves that crash-test dummies suffer more damage without safety devices. Crash-test dummies, of course, cannot have their driving behavior altered by a perception of greater crash survivability. Consequently, the research with dummies doesn’t refute the hypothesis that driver behavior might be changed and thus negate or reduce some of the anticipated safety gains.

The plausibility of the aggressive driver hypothesis cries out for more research. For example, Hawaii, the state with the most rigorously enforced seat belt law and the highest compliance rate in the nation, has experienced an increase in traffic fatalities and fatality rates since its law went into effect in December 1985.

One could argue that this new paper could present political economists with the very research they crave. 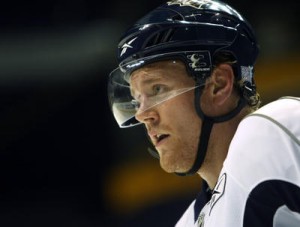 But beyond the halls of the nation’s top universities and the niche publications serving researchers’ output to a small collection of interested thinkers and parties, the findings of Chong and Restrepo’s study seem to put visor evangelists and player safety hawks at odds with Brendan Shanahan’s recent push to reduce the risk of injuries in the NHL. In addition to more aggressive play resulting in higher rates of penalization, such a turn in behavior could result in more injuries to both the hitter and the target.

Of course, Chong and Restrepo introduce the visor as a cause of aggressive behavior when mandated, an analytical misstep that suggests that, because Y happens in the presence of X, X necessarily causes Y. They note in the paper that “[w]hile currently the use of hockey visors is not compulsory in the NHL, the top league in the world, its use has been made mandatory in different feeder leagues around the world at different points of time.” This they present as an advantage in their study because it allows them to compare behavior before and after implementation of visor use.

What Chong and Restrepo fail to do is account for the presence of Z, or the relative incentives of a player in a “feeder league” trying to break his way into “the top league in the world.” We have noted previously, for example, that the “deceptively diminutive” Nashville Predators forward Jordin Tootoo “had to literally pound his way into the lineup, delivering game-changing blows and never backing down from fisticuffs.” That is to say that, while Tootoo may have had to wear a visor in the AHL (he didn’t — the AHL didn’t make visors mandatory until recently, see Section 3 Rule 9.5), the presence of that visor probably had little to no causal impact on his aggressive play than did his desire to differentiate himself from other prospects trying to make the big club.

Still, visor advocates should step back a moment and consider Chong and Restrepo’s findings. That they failed to consider individual incentives that minor leaguers trying to make the jump to the NHL face on a daily basis does not mean that the results of this study are without merit. If the NHL wants to continue to deliver a fast-paced game with fewer interruptions, and to continue to protect players from unnecessary injury as the result of aggressive play, it should consider how top-down changes affect on-ice performance. After all, we’re still a few years away from a technological solution to the NHL’s concussion problem.

Since the original publishing of this article, we felt that some clarification was in order. Just as nobody denies that seat belts save lives during accidents, nobody would deny that a visor could help prevent damage to a player’s face or head in the event of a high sticking, or an errant puck ski-ramping off another player’s stick. What we mean to suggest is that the NHL should consider what happens on ice during the rest of the time when high stickings and errant pucks flying aren’t occurring as player incentives change when forced to wear a visor.