Last week, it was announced that the New Jersey Devils and New York Islanders would play a preseason game at the new Barclays Center in Brooklyn. The game is scheduled for Tuesday, October 2, 2012 at 7:30 p.m. and will mark the first NHL contest to be played in Brooklyn.

The Barclays Center promises to be a premier venue for the city of Brooklyn not just for sports, but for other events such as concerts, ice shows and music awards shows.

Although the Devils-Islanders contest will be just an exhibition, such an event in a new arena is exciting, especially for an area that needed the venue.

Here are some things to know about Barclays Center as you mark your calendars for this game in the 2012-13 NHL season. 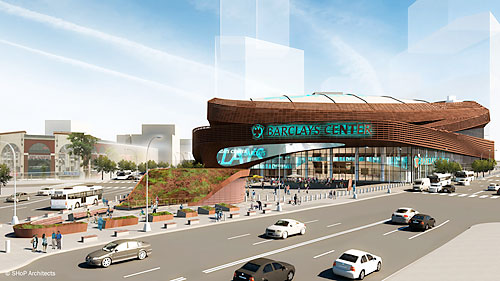 Barclays Center vs. Prudential Center vs. Nassau Coliseum: The Basics

Prudential Center in downtown Newark, New Jersey is currently the home of the New Jersey Devils. The arena opened in 2007, and the Devils moved in after spending their entire existence in what is now known as the Izod Center.

“The Rock,” as it is affectionately known, seats 17,625 for hockey. The arena is divided into the lower level, the mezzanine level and the upper level. It can also hold 18,711 for basketball.

Nassau Coliseum is one of the smallest arenas in the NHL and is the oldest one currently in use in the league. It holds just 16,250 fans for hockey and 17,260 for basketball games.

Barclays Center will seat just 14,500 for hockey, which means it will have the smallest seating capacity behind the MTS Centre in Winnipeg. However, it will be able to hold 18,103 people for basketball, as the New Jersey Nets will move there for the 2012-13 NBA season and become the Brooklyn Nets.

One of the biggest selling points of the Barclays Center is that it will be easily accessible from all areas of New York City, as well as New Jersey. Patrons can get there from nine different subway lines and also via NYC bus service or the Long Island Railroad. It will only take about 20 minutes to get to the arena from major subway stations such as Grand Central and Penn Station.

For those who choose to drive, it is located near every major bridge and tunnel in the New York City and New Jersey areas.

Meanwhile, the Prudential Center is also easily accessible by public transportation. Fans can travel to The Rock via New Jersey Transit, the PATH Train, Newark Light Rail and Amtrak. It is a short walk from Penn Station to the arena.

Nassau Coliseum is the least accessible arena of the three. Fans can take a Long Island Railroad train, but would need to take a taxi cab or bus to the arena, which takes an additional five to 10 minutes. There is no direct bus service to the arena from the Westbury train station, one of the nearby stops. In an area where many people rely on public transportation, this is a turn-off and not very convenient, especially since parking can be very expensive.

A Possible New Home for the Islanders

Reports have surfaced that one of the main reasons behind this game is to see if it would be a potential new home for the Islanders. The team’s lease at Nassau Coliseum expires in 2015, and residents of Nassau County voted down a referendum in the summer to secure a $400 million loan to build a new arena.

Barclays Center management believe that having the Islanders in a new building would  help grow the fanbase. They feel there is an untapped market in Brooklyn that might be interested in rooting for the Islanders. Furthermore, since it is easy to get there, it could entice more fans to come to games, thus making the team more money.

Isles general manager Garth Snow echoed the sentiments of arena management and said that he is excited for the Islanders to play in a state-of-the-art building.

However, the limited seating capacity for hockey is a drawback, and this could prevent the Islanders from ultimately making the move.