“It is a night they will talk about forever, and the Flyers all know it. For the record, it was May 14, 2010. It was the night when the Flyers did the impossible.” – Rich Hofmann, Phila. Daily News

“Peter Laviolette sat there and for several seconds, his eyes seemed to tear up. The coach appeared to be overcome by another, frantic Flyers finish, played out against incredible odds that was a sheer act of defiance by a group of players who won’t succumb to the inevitable. No matter how daunting the odds.” – Tim Panaccio, CSNPhilly.com

The team huddled around the coach, eager to hear what he had to say about the hole they’d dug themselves in.  He looked up at the scoreboard, a 3-0 deficit staring him in the face and the three words he said would stick with this resilient team:

The Philadelphia Flyers had done the unthinkable already.  They had trailed the Boston Bruins 3 games to nil in the Eastern Conference Semifinals.  The fact they’d won three consecutive games was an achievement all on its own.  But the bunny slope they once had to climb, had turned into Everest.

After being dominated for the first 15 minutes, and the Bruins having put up 3 goals to the Flyers’ none, the team’s wind had all but left their sails.  Peter Laviolette thought it was time for a regrouping.  He would call what would be known as “The Timeout”.

There was no need to chastise his players and tell them what they’d done wrong.  The team knew they came out flat-footed and needed to change their game plan quickly.  The Flyers had been down 3-0 in the series before, so a 3-0 goal deficit didn’t seem like anything new.  They now had just over 45 minutes to save face.

The kick-start was provided by James van Riemsdyk.  Late in the first, JVR found himself with an open shot to the right of Tuukka Rask.  The shot wasn’t clean, it wasn’t hard, it wasn’t pretty.  But it did deflect off the defenseman’s stick and past the Bruins’ netminder, giving a vote of confidence to the once downtrodden team.

The Flyers came out buzzing in the 2nd period.  Early in the frame, a solid effort by the Hartnell-Leino-Briere line forced Rask to make a kick save right to the backhand of Scott Hartnell’s blade.  The winger shoveled the puck into the open net and the lead had been cut to one.

The comeback no longer seemed impossible.  In fact, it seemed probable.

It wouldn’t be the last time that line would make an appearance.  Later in the period, Hartnell found himself inside the attacking zone along the boards with a streaking Danny Briere coming into the play at full speed.  Hartnell chipped a pass to the middle of the ice, Briere scooped it up, swung wide around the net and tried a wraparound.

The angle he had was absurd.  There was no way a puck could go in from that angle.  It wasn’t supposed to.  But it did.

When Briere threw the puck at the net, Bruins defenseman, Matt Hunwick, tried to poke the puck away.  The placement of his stick inadvertently allowed the puck to roll up the shaft, off his backside, and into the net to tie the game at 3.

A back and forth 3rd period melee resulted in countless shots that rang off the post.  Each team was exchanging waves of offensive pressure on the goalies hoping for that one lucky bounce to close out the game.  That was until the Bruins committed a Too Many Men bench penalty with a little over 8 minutes to play in the game.

On the ensuing powerplay opportunity, the Flyers cycled the puck around to Mike Richards along the right boards.  Noticing the screened goalie, the captain put a shot on net that was knocked down in front by Ville Leino.  It ended up on life-long Flyer, Simon Gagne’s blade.  With Rask already out of position on the original shot, Gagne settled the puck on his stick, saw the top left corner wide open, and wristed a shot that hit twine.  The hometown crowd was silent.

Fans were getting impatient.  The Bruins saw their powerful lead demolish before their very eyes.  They needed a spark to get themselves going again, but Claude Giroux would take out any sense of fight Boston had in them.  At the 2-minute mark, Giroux found himself with the puck behind the Boston net with two Bruins draped over him.  He held the puck, twisting and turning, successfully getting out of their grips.  When another defender came in to take the puck, Giroux somehow was able to keep the puck even longer, wasting more precious time off the clock.  In all, about 30 seconds had passed before Claude chipped the puck behind Rask’s net and went off on a line change.

Philadelphia would go on to hold the lead and move on to the Eastern Conference Finals.  The Boston crowd sat stunned in disbelief as their beloved team succumbed to the resilient Philadelphia Flyers.  The game highlights are below: 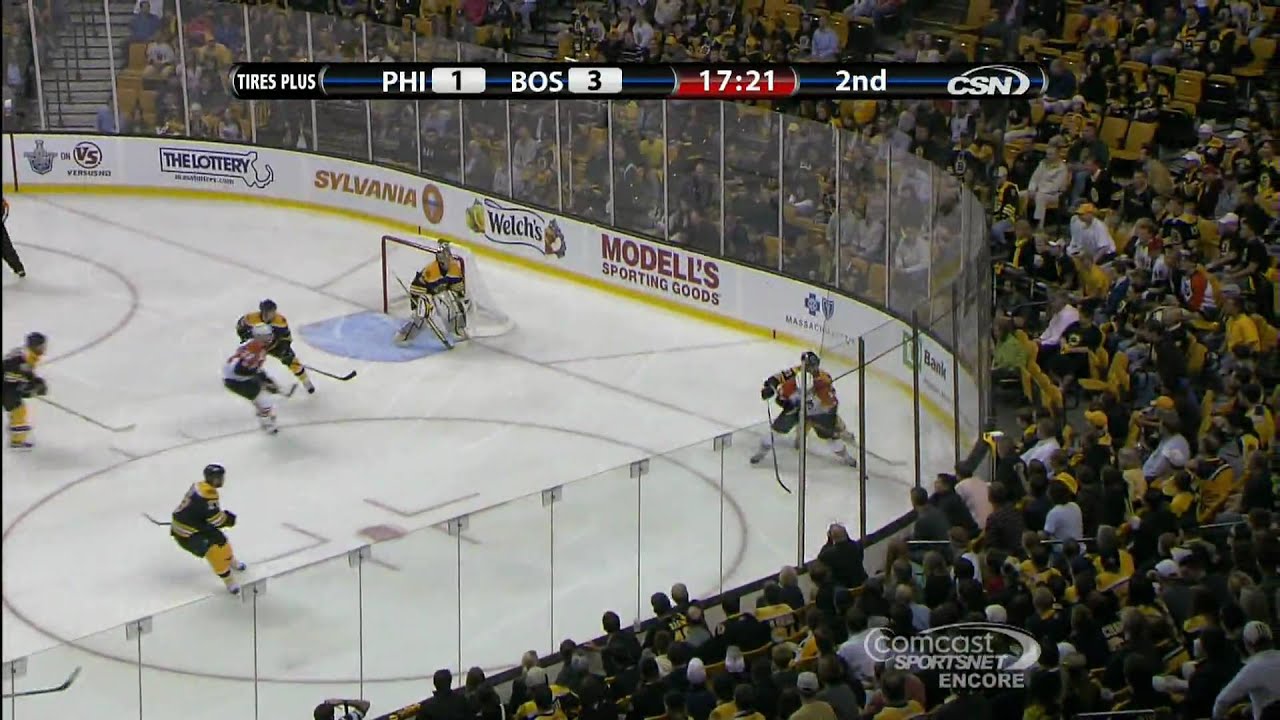 The game was played in Boston, but Flyers management decided to open the doors to the Wachovia Center (now Wells Fargo Center) for fans to take in Game 7 on the jumbotron.  The mood in the arena started somber, grew to electric, and ended in sheer pandemonium.

Flyers faithful poured out of the Wachovia Center, ears still ringing as they sat in their cars and waited for the traffic to clear.  Car horns were honking all throughout the City of Brotherly Love.  It was a whirlwind of excitement for a town that was all but out of contention just a week prior.

“This improbable, incredible comeback is complete!  History made in Boston tonight!  The Flyers defeat the Bruins 4-3!  They are the 3rd team in NHL history to come back from behind after trailing a series 3 games to none!  Celebrate Philadelphia!  You deserve it!”

Now if only it had been the Stanley Cup Finals…