Despite being outplayed by the Islanders for long stretches of their first round matchup, the Pittsburgh Penguins managed to persevere and dispatch their up and coming rivals in six games.  Indeed, the Isles’ speed and tenacious forecheck almost did Pittsburgh in but, ultimately, the Pens find themselves moving on to the second round for the first time since 2010.

So how did the Penguins overcome everything the Islanders threw at them?  Here, we present three key factors that allowed the Eastern Conference’s top seed to move on.

Despite the fact that he only played in two games, you could realistically make an argument that Vokoun was the MVP of this series for the Penguins.  Sure, Evgeni Malkin is tied for the league lead in scoring and both Sidney Crosby and Jarome Iginla are right behind him to give Pittsburgh three of the top four scorers in the postseason but it was Vokoun that stepped in and, well, started stopping the puck.

With the Islanders dominating play once again in the first period of Game 5, Vokoun shut the door.  The veteran stopped all 14 first period shots New York peppered him with, allowing his team to regroup and collect themselves.  The Pens’ offensive guns eventually went to work allowing the club to come away with a lopsided (on the scoreboard, anyway) 4-0 victory as Vokoun simultaneously recorded his second career postseason shutout and restored order to the Pittsburgh crease.

Simply put, Game 6 provided more of the same.  The Islanders dominated for stretches with Pittsburgh having no answer for New York’s forecheck and tenacity.  And while Vokoun did yield three goals, he could hardly be faulted for the ones he gave up.  Ultimately, the only thing that mattered was that he made the saves he needed to make; he held his club in the game when the Islanders were buzzing.

“To be thrown into the middle of a series and play the way he did, that’s huge. Especially tonight. They carried the play and had a lot of great chances. He was sturdy and solid for us.” – Sidney Crosby, following Game 6

In the end, that was all the Penguins would need to move on.

Tyler Kennedy was an absolute spark plug for the Pens upon his insertion into the lineup for Game 5; his speed and tenacity were visible from his first shift.  He constantly hounded the Islanders, he was relentless on the forecheck and ferocious on the backcheck.  Simply put, TK added an element to the Penguins’ game that the Isles’ hadn’t seen to that point in the series.  Oh, and he also opened the scoring in Game 5 and set up the overtime, series clinching goal in Game 6.  Not too shabby for a guy that was a healthy scratch for the first four games of the playoffs.

While Vokoun and Kennedy had the most noticeable impact on the series’ final two games, Bylsma made other adjustments that contributed, as well.

Joe Vitale, for example, replaced Jussi Jokinen who appeared to be a step too slow throughout the series.  Vitale added foot speed, physicality and was a suitable replacement in the faceoff circle, winning 90% of his draws in Game 5 and 50% in Game 6.

Meanwhile, Depres (who struggled early in the series and, consequently, lost his spot in the lineup once Brooks Orpik was healthy enough to play) replaced Mark Eaton to provide the team with more mobility on the back-end.

As a whole, the insertion of these four individuals didn’t prevent the Islanders from controlling long stretches of play as they had for much of the series.  What it did do, however, was equip the Penguins with what they needed to weather the storm and emerge victorious.

More often than not, special teams can play a monumental role in deciding the outcome of a playoff series and this Penguins-Islanders matchup was no exception.  Being grossly outplayed for long stretches at even strength, the Pens relied on their complete domination of the Isles in the special teams battle to escape the first round.  Had they not enjoyed this advantage, they very well might be heading to the links rather than a date with the Ottawa Senators.

It’s no surprise that the Penguins power play found success against the Islanders.  After all, Pittsburgh deployed the second ranked man advantage in the regular season this year.  But the Pens’ power play was downright lethal against New York in the postseason, converting at 33.3%.

With the likes of Sidney Crosby, Evgeni Malkin, Jarome Iginla, Kris Letang, et al, the Penguins proved to have too much skill with the man advantage for the Islanders to handle.  As Pittsburgh spread seven power play tallies among five players, the Islanders simply couldn’t keep up with the dizzying puck movement the Penguins’ skilled players put on display and it cost New York in a big way.

The success of the Penguins’ penalty killing, unlike their power play, did turn out to be a surprise.  A matchup of the Pens’ 25th ranked short-handed unit against the Isles’ 11th ranked power play figured to favor Hart Trophy nominee, John Tavares, and the New York Islanders.  Wrong.

Pittsburgh effectively took the Islanders’ power play out of the series, killing 18 of 20 opportunities in route to posting the third best short-handed effort of the first round.  The results were like night and day compared to the regular season.  And it was one of the biggest reasons that the Penguins were able to move on.

Any team that employs arguably the two greatest offensive players in world is going to have an advantage.  From a matchup standpoint, it’s a nightmare for opposing coaches and Isles’ bench boss Jack Capuano was certainly no exception.  Indeed, Crosby and Malkin combined for a staggering 20 points in the series as the Islanders had no answer for either.

After missing the Penguins’ Game 1 dismantling of the Islanders, Crosby came back for Game 2 with a vengeance, scoring twice in the game’s first eight minutes.  Unfortunately for Pittsburgh, it wasn’t enough as New York evened the series with a stunning 4-3 victory.  Still, it was a sign that Crosby was back and would be a thorn in the Islanders side for the balance of their first round matchup.

At times during this series, Crosby was one of the few Penguins generating any offense at all.  As the Islanders’ speed and tenacity consistently wreaked havoc in Pittsburgh’s defensive end, the Penguins’ captain was making noise of his own.  His three helpers in Game 3, for example, practically dragged Pittsburgh to a thrilling 5-4 overtime victory that they probably didn’t deserve.

Then, in Game 5, he provided Jarome Iginla with the easiest assist he will ever record. 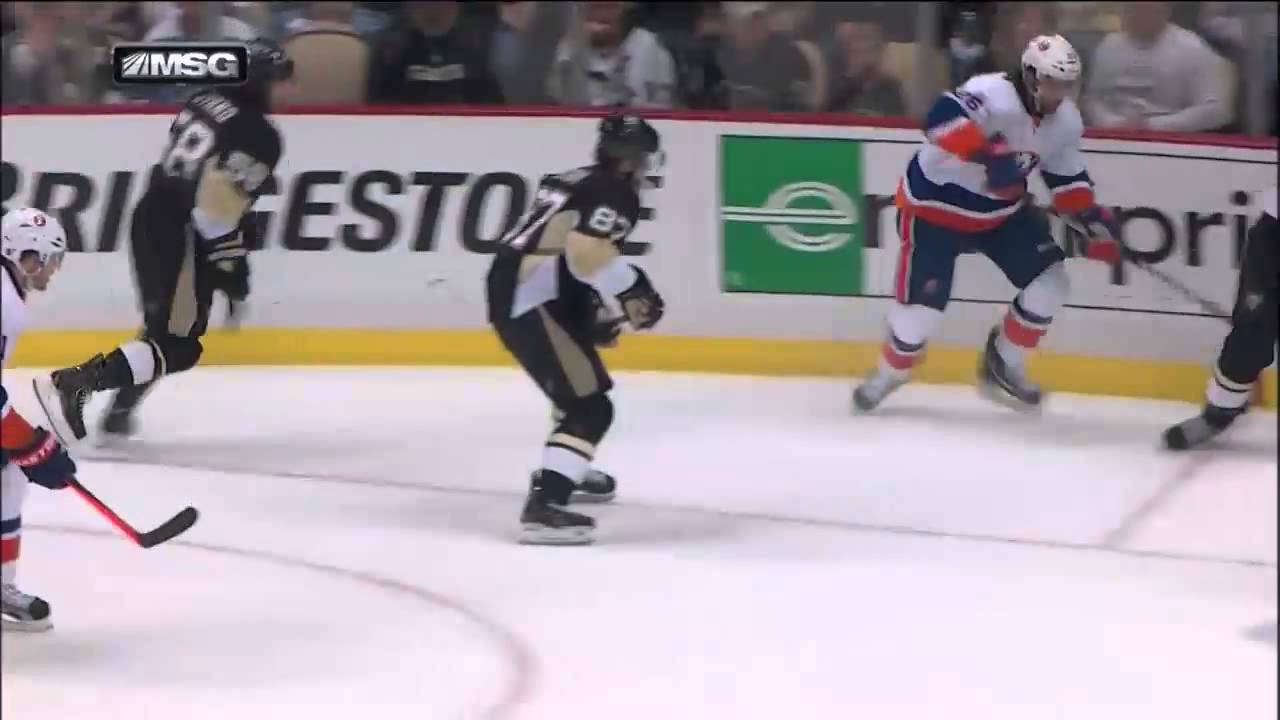 It was almost immediately compared to a goal Mario Lemieux scored against these same Islanders that is now immortalized in bronze outside Console Energy Center.  And it served to let today’s Islanders and the rest of the league know that Crosby was ready to propel the Penguins on.

Despite putting up a league best 11 points to this point in the playoffs, Malkin actually hasn’t played all that well.  Yes, he is picking up points by the boatload but his game has also been filled with errant passes, hapless turnovers and lazy defensive zone play.

That being said, with the Penguins facing the prospect of playing a pressure filled Game 7 against a team that had already shown they were more than capable of playing with the mighty Penguins, Malkin took matters into his own hands.  For starters, he fearlessly came up with a huge blocked shot midway through the second period (after another one of his turnovers) to keep the game within reach.  Then, with time winding down, he galloped into the Islanders’ zone, swooped around the net and set Paul Martin up for the game tying goal.  As if that weren’t enough, he combined with Tyler Kennedy to set up Brooks Orpik’s series clinching goal in overtime.

In the end, the Islanders provided more of a fight than most pundits thought possible against the East’s top seed.  Hell, had they gotten a couple more bounces, they realistically could have won the series.  But, ultimately, Bylsma’s adjustments to his lineup, special teams and two all-world players did the upstart Islanders in.