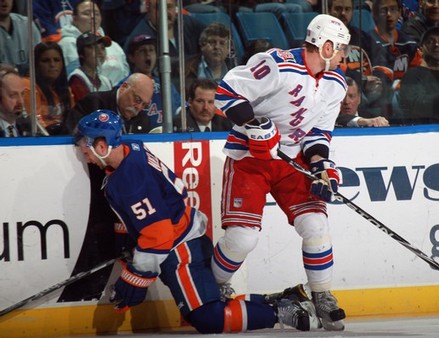 “My initial thought was he’s (teammate Mike Modano) dead. My number one concern is that when a player goes into the boards like that is that he is seriously hurt. I think it’s just a matter of time before somebody is seriously hurt or is killed on a play like that. It was an absolutely ridiculous play and disgustingly cheap. The hit was something far worse than cowardly. As far as I’m concerned, he (Ruslan Salei) should be out of the league. It’s time for the powers that be to step up and make a lesson of this guy.” —Brett Hull

Imagine you are a parent. You work very hard to support your family, and do whatever it takes to ensure their happiness. You have a 10-year-old son, and he plays youth hockey. Your job prevents you from seeing him often during the week, but you make sure to be at every game to watch him play.

You are in the stands, cheering him on, when suddenly, a bigger, stronger 10-year-old boy on the opposite team charges at your son, hitting him directly in the head. You can do nothing but watch, as your son lays on the ice, motionless.

While this story was portrayed as hypothetical, believing so is a serious misjudgment.

According to a study from June 2006, performed by Dr. Steve Carney, a professor of sport management at Drexel University in Philadelphia, about 41 percent of American youth play sports, and an estimated 3.8 million concussions occur each year in youth sports.

The child in this “theoretical” situation could be anyone within that percentage. It could be your child.

The issue of head-related injuries is not limited to youth sports. On the professional level, specifically in the National Hockey League, the rate of concussions has increased dramatically in the last five years.

In fact, the main reason that youth hockey has experienced such vicious hits is because of the trickle-down effect of similar plays in the NHL.

The National Hockey League is at fault, failing to set the example by cracking down on concussions.

In order to severely reduce the number of concussions in hockey, legislation must be passed, ensuring the safety of youth hockey players.

In addition, the National Hockey League must modify its current rules of play, as well as its disciplinary measures, in order to create a safer game. By slowing down the pace of the game, and raising awareness of the severity of concussions, the number of these injuries will be severely reduced.

But where did this all begin?

Let us explore the origins of the issue:

Following a labor dispute that led to the cancellation of the 2004-2005 season, the National Hockey League sought to make the game more exciting in order to re-ignite and expand its fan base. Several modifications were made to the rules, and even the ice surface, in order to promote more speed, flow, and offensive production.

These changes were made with good intentions, and have had the desired effects. The game is more entertaining to watch, and there is more offensive flow than ever before.

However, the NHL failed to consider the severe consequences of such changes. Increasing the pace of the action has lead to more collisions, less on-ice awareness, and overall, a significantly lower level of player safety.

For example, one specific rule-change, the “trapezoid” rule, restricted the goaltender from handling the puck in any area behind the net outside of a small trapezoid in the center of that space. Only a positional player (any player besides the goaltender) is permitted to play the puck in those areas, allowing for more offensive flow and less goaltender intervention.

The issue with this rule-change is that allowing only players to play the puck in such areas has led to an increase in collisions, since there are more races to pucks in the corners.

In light of the increasing number of concussions in hockey, small steps have already been taken towards ensuring a safer game. The Ontario Hockey League recently banned all hits to the head, and the International Ice Hockey Federation, the governing body that dictates the rules for Olympic play, has had a ban on such hits since it was established. (Wayne Scanlan, Ottawa Citizen.)

Last year, the NHL implemented a new rule which prohibits “a lateral, back-pressure or blind-side hit to an opponent where the head is targeted and/or the principal point of contact.”

During the recent GM meetings, the National Hockey League embraced the issue, with commissioner Gary Bettman rolling out his new five-point plan to combat concussions.

I would argue that while these steps are groundbreaking, they still do not reduce the rate of occurrence. They do not address the primary issue—the pace of the game.

The National Hockey League must lead by example and embrace reform in order to reduce the number of concussions. The following rule-changes need to be implemented:

First, the trapezoid rule must be discarded. By disposing of this rule, the goaltender will handle the puck in the corners far more often, as opposed to the players. Since players won’t be rushing for every loose puck, there will be fewer collisions.

Second, the League should adopt a “no-touch” icing rule. Meaning, if a player clears the puck from one offensive zone to the other, the play is ruled dead as soon as the puck crosses the line behind the net.

This will reduce the number of collisions, because players will not be rushing for possession of the puck in icing situations. The International Ice Hockey Federation has implemented such a rule, and it has made Olympic play safer as a result.

Third, the NHL needs to be more consistent with its disciplinary actions. We’ve seen some players suspended for hits to the head, while others, such as Zdeno Chara, have gotten away unscathed.

If there were such a universal rule, with such severe consequences, players would be more cautious about their aggression in those situations.

“…We have to allow that (physicality) to make it a good, hard, tough game. Players have to understand about mutual respect. They should be out to win, but not at any cost. You don’t have to injure a player.” (The Hockey News, October 22, 1999.)

The game needs a physical aspect; it’s just a matter of whether or not that aggression can be controlled.

An inherent flaw in the NHL rulebook is that, generally, only hits which are deemed to have targeted the head are reviewed. Unfortunately, there are other types of hits that can result in head injuries, yet they are virtually ignored.

Just recently, the league had two glorious opportunities to show the hockey world how serious they actually are about this issue.

A short while ago, Zdeno Chara impacted Montreal Canadiens forward Max Pacioretty near a stanchion between the boards and the glass. Paciorettty’s face slammed into the stanchion,knocking him out. Chara, of course, escaped any form of discipline, as Colin Campbell, Gary Bettman and the NHL did not see anything wrong with Chara’s actions.

Give the NHL credit for at least scheduling a hearing to review the Chara/Pacioretty incident.

Apparently, what occurred during an Islander/Ranger game last week at Nassau Coliseum was not even worthy of a hearing.

In that contest, Ranger forward Marian Gaborik decided, while his own team was on the power play (!), to clock Frans Nielsen of the Islanders, sending him head-first against the boards. Not a peep was heard out of Bettman and Co.

So, how serious is the league about this issue? Obviously, not the NHL is not as concerned as we might have previously thought.

There was once a time when the game of hockey was a moral, sincere sport. Recent history has shown that is no longer the case.

We need to save our game, and we need to ensure the safety of those who play it, because if we don’t, it really is only “ a matter of time before somebody is seriously hurt or is killed.”

I sincerely believe that if we are willing to embrace change, we will severely reduce the number of concussions and head-related injuries, and will make the game of hockey much safer.