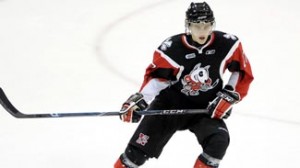 One day folks may be considering the name ‘Dougie Hamilton’ as one of the best names we’ve seen in hockey, but it’s the on ice play of the rugged blueliner that has scouts pushing his name near the top of their lists.

When scouts think of Hamilton, they can’t help but draw comparisons to current Flames D-man, Jay Bouwmeester, for his excellent skating and big minute crunching play. A guy who can play in all situations, for long periods of time, and excel at it? Sign me up.

Hamilton is such a competitor and fitness nut, that Niagara coaches play him over 30 minutes a night, and could play him more should they have to. His excellent conditioning has allowed him to be fresh, even in late moments of a tight game.

Though Swedish defenseman, Adam Larsson, gets all the attention in this upcoming draft, GMs have a backup plan for their defensive cupboards and Hamilton can be more than that.

Top Prospects Game: Scored a goal en route to a 7-1 win for Team Orr, and was named an alternate captain prior to the game.

“He’s a player who’s coming on … I remember how poised he was in his first season with Niagara last year,” NHL Director of Central Scouting E.J. McGuire told NHL.com. “He possesses a long reach and he’s a player I expect a lot of things from this season.”  (NHL.com)

“Hamilton…I love that kid. He’s a two-way beast. He’ll nail you, play physically in the defensive end, he can take the puck and go end-to-end with it. He can quarterback the power play. I think he’s actually better as the triggerman on the power play– he’s got a big shot. He’s approaching Larsson’s level. Larsson’s been there a couple of years, whereas Hamilton’s development curve is heading straight up. So, Hamilton, I’d be shocked if he made it out of the top-eight picks this year.”- Kyle Woodlief, Red Line Report; December 2010

Top 4 Two-Way Denseman who can log big minutes and play in all situations; penalty-kill, powerplay, you name it, he’ll do it.

2 thoughts on “The Next Ones – Dougie Hamilton – NHL 2011 Draft Prospect Profile: The Next Big Blueliner”