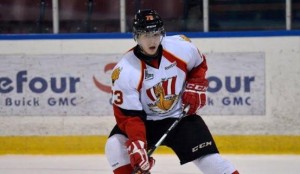 Zykov has been a pleasant surprise for the Drakkar (Source: QMJHL)

Basically unknown before the season, Valentin Zykov, a 6-1, 210-pound forward, has arguably been Baie-Comeau’s best player this year since he was drafted 76th in the 2012 CHL Import Draft. In 67 games with the Drakkar, the Russian sniper who arrived with very little fanfare, notched 40 goals and 35 assists for 75 points, raking up in the process. The right winger also finished with an impressive +29 plus/minus rating and won the Michel Bergeron Trophy, awarded annually to the Offensive Rookie of the Year.

Zykov quickly impressed scouts and Drakkar fans with his great hockey IQ and offensive abilities. The European Zykov could be confused for a Canadian power forward if you ignored the fact that he is from Russia, with his powerful stride and nose for the net. Zykov has adapted quickly to the physical North American game and thrives when using his big frame along the boards and in front of the net.

Zykov’s draft stock rose fast as a result of a quick transition to the QMJHL. “He’s got to work on his consistency like a lot of kids, but he’s been a real impact player for them,” a scout told me. “He’s strong. He can really fire it, and he’s tough to knock off the puck.” A very streaky player, Zykov had 20 multi-point this campaign for the Drakkar, recording an impressive 10 goals and 16 assists for 26 points in a 12-game stretch in January.

Zykov was rated as a C skater in Central Scouting’s initial 2013 rankings, but his hot start and torrid January improved dramatically his draft stock. The swift winger continued to produce offensively during the playoffs, recording 3 goals and 3 assists for 6 points during the first-round sweep of the Sherbrooke Phoenix. Baie-Comeau will face the Victoriaville Tigres in the second round of the 2013 playoffs.

Zykov, who is a smart player with a plethora of solid tools, has a powerful hunched over stride and uses his smarts to create scoring opportunities in the offensive zone. The big, powerful winger is tough to knock off the puck and has a great shot that he gets off quickly. He’s currently one of the top draft eligible skaters out of the QMJHL and it’s unknown how the “Russian” factor will impact his selection, but his stock has been steadily rising since the start of the season and an impressive showing in the playoffs could improve his ranking even more for the upcoming 2013 NHL Entry Draft.

Zykov scoring on a nice wrister during the Super Series

The surprising rookie also participated in the Subway Super Series playing on a line with fellow QMJHLers Anton Zlobin and Mikhail Grigorenko. Zykov, one of only two players on Team Russia born in 1995, finished the two-game series with 2 points and +1 differential. While Zykov was not able to crack Russia’s World Junior roster in Ufa this year, expect him to be a mainstay for Team Russia next season in Malmo, Sweden. 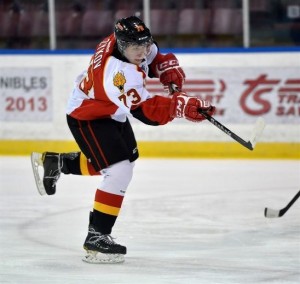 Ryan Holmer from The Prospect Report:

“Zykov is a big, powerful winger with a great shot and quick release. Very hard to take off of the puck. Zykov has size and skill, but he is very raw. He’s a longer-term project, and the “Russian” factor will have a huge impact in his selection. Yet, because he has speed and he can score, Zykov has the potential to be a top-6 forward with some seasoning in the minors.” Follow Ryan on Twitter @ProspectReport.

“Zykov has slipped under the radar for most of the season, but whoever ends up with him after Draft Day 2013 could be walking away with a steal. An unheralded addition by Baie-Comeau last summer, he adapted quickly to the QMJHL and set a handful of team rookie scoring records along the way. A complete player, it could be argued that perhaps no draft eligible player in the league is as dangerous in close as Zykov. He scored a large chunk of his goals by driving the net, fighting for position and looking for a quick release or to pot a rebound. But he’s not just a goal scorer either, as he’s got a solid frame and used it well to win battles along the wall and get his nose dirty in the corners. His goals might not always be the prettiest, but they count just as much. As he improves his skating, he’ll become even more dangerous on the ice.” Follow Kevin on Twitter @kforbesy.