Once the Buffalo Sabres officially hire a new general manager, one of the priorities on the list this summer will be beginning extension talks with the face of the franchise Jack Eichel. The 20-year-old center is entering the final season of his entry-level contract. He’s eligible for an extension when the new league year begins on July 1.

Eichel is obviously in line for a pretty hefty pay raise on his second contract. He was nearly a point per game player last season over 61 games and scored 56 points in 81 games during his rookie campaign. The money will, of course, be a factor in the negotiations, but the term of the deal will be the most important thing for the Sabres to focus on.

The type of term the organization will want to avoid at all costs is a four-year contract. That would make Eichel an unrestricted free agent at the age of 24. If the Sabres want to go the route of a bridge deal, they need to keep the term at two or three years. That would mean the 2015 second-overall pick would still be a restricted free agent at the end of the contract., allowing the Sabres to maintain his rights and then work towards a long-term extension. 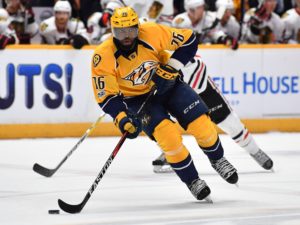 I’m not a particularly big fan of the “bridge deal”. It’s a contract we don’t see very often. Going this route has the potential to do more harm than good to a franchise in the long term. One example is the Montreal Canadiens and PK Subban. The Canadiens signed Subban to a two-year, $5.75 Million contract in 2013. Just over 18 months later the Habs dished out a monster eight-year $72 million deal that carried a $9 million dollar cap hit. Had they gone long term in the first place, it’s possible they could have had Subban at a considerable discount for a few years.

The bridge deal is reserved for players who teams want to prove themselves further before handing out a long-term commitment. In Eichel’s case, there’s no need for that. In two years he’s proved that he is one of the best players in the game and will likely be wearing the “C” next season. I’d much rather tie him up for as long as possible and not have to worry about revisiting the issue in the middle of his prime.

As I mentioned, recent history has shown clubs favor locking up their good young players for as long as possible. Aaron Ekblad signed an eight-year extension with the Florida Panthers last July, Aleksander Barkov also signed a long-term six-year contract with the Panthers in January of 2016. A few more recent examples include Johnny Gaudreau, Hampus Lindholm, Seth Jones and Rasmus Ristolainen.

The one downside of taking the long term route is it’ll likely cost more up front. Players are giving up years of their unrestricted free agency that clubs will have to basically buy. Instead of getting a decent cap hit in a short term deal, teams have to carry the bigger cap hit on a big contract. The flip side though is in a few years the cap hit that looks big in the beginning can turn into a discount a few years later. For example, look at what the Nashville Predators have done with their defense. Roman Josi, Ryan Ellis and Mattias Ekholm are all signed for at least the next two years with cap hits at $4 million each.

We’ve discussed the importance of term, but not the money in terms of what is fair value for Eichel. The organization has not dealt with contract negotiations for a player of Eichel’s stature. The good news is if Jason Botterill is the new general manager he handled the salary cap with the Pittsburgh Penguins and was with the team during big contract negotiations. Botterill went through the negotiations with Sidney Crosby in 2012 and Evgeni Malkin and Kris Letang in 2013. 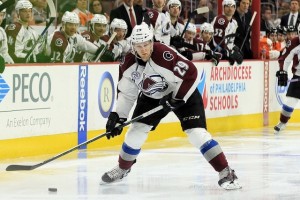 If you look at comparable recent contracts, the market would indicate that Eichel is looking at a cap hit in the $6.5 to $7 million range. Gaudreau signed with the Flames in October for a cap hit of $6.75 million. Filip Forsberg (6), Sean Monahan (6.375), Nathan MacKinnon (6.3), Jonathan Huberdeau (5.9) and Barkov (5.9) have all signed long-term contracts in the last year in the neighborhood of a $6 million cap hit.

A seven-year $49 million contract for Eichel may look steep to some for a second NHL contract. When you look at the comparable deals, as well as the cost of buying years of free agency, it may be what it takes to get Eichel to sign on the dotted line for a long time.

The important part to remember is how the cap hit will look in one or two years. If Eichel can be a 70 to 80-point player as soon as next season, paying $7 million for that type of production for the next seven years would be a steal. To put a bow on this and give some perspective as to the potential discount this could be for the Sabres, a report came out yesterday that the New York Islanders are willing to pay 26-year old John Tavares $10 Million a year for the next eight years.