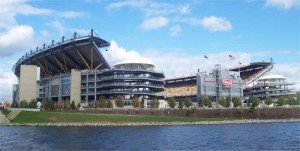 rgh has had it good recently.  Within the past twelve months they have seen their teams play in the Stanley Cup Finals and the Superbowl.  Unfortunately for hockey fans, the Penguins lost in the finals while the Steelers were victorious in a dramatic game yesterday.

Watching the game last night I found myself making many comparisions between the two Pittsburgh teams.

The Steelers got off to a great start in the game.  By halftime they had a ten point lead and victory looked inevitable.  They entered the fourth quarter with an even larger lead and they seemed destined to become champions.  And then, much like it has for the Penguins so many times this year, it looked like it was all falling apart.  Suddenly, with just over two minutes left in the game, Arizona had the lead.  Penguins fans had seen this happen far too many times this year.  For some reason a third period lead has been the Penguins kryptonite.

But it was different for the Steelers.  With 35 seconds left in the game they scored the winning touchdown and became Superbowl champions once again.

It was reminiscint of game five against the Red Wings last season.  Maxime Talbot scored the tying goal, again with only 35 second remaining, to send the game into overtime where the Penguins were victorious.

But it hasn’t been that way for the Penguins this year.  While their football cousins are planning a parade route, the Penguins are in danger of planning tee times for April.

“Steeler football is 60 minutes. It’s never going to be pretty. Throw style points out the window, but these guys will fight to the end. ”

The current Penguins do not play 60 minutes.  In most games you should consider yourself lucky if you see them play 40.  They definitely don’t fight to the end.  Not anymore.  This year’s team seems generally beaten down when they are losing.  Their confidence is shot.  They aren’t able to pick themselves up and continue on.  If the Penguins were in the Steelers situation last night they wouldn’t have been able to come back with seconds remaining.  They would have conceded victory.

Their troubles on the power play are the perfect example of a team that doesn’t “throw style points out the window.”  They want it to be pretty.  They want to pass the puck around the perimeter until they can set up the perfect play.  It is pretty, but it’s usually ineffective.  The Penguins power play has been the biggest disappointment in a season filled with disappointment.

The Penguins lost a lot of players to free agency over the summer.  Outside of Marian Hossa,  none of the players they lost can be considered world class talents.  A stream of all stars didn’t bolt from the Mellon Arena in July.  But the players they lost – Ryan Malone, Gary Roberts, Jarko Ruutu, Adam Hall, Georges Laraque and Ty Conkin – are the kinds of players that did fight until the end.  They weren’t pretty, but they did play for 60 minutes.  They threw style points out the window.  People like Colby Armstrong, who was traded for Hossa, played the same way. These players were the heart and soul of the Penguins franchise.  They were willing to take the risks necessary to win.

The Penguins don’t do that anymore.  Tyler Kennedy and Matt Cooke have tried to step up, but two players cannot make up the difference.  Max Talbot has been dealing with injuries and he hasn’t been his usual high energy self this year.

This year, the players have that provided that spark have been from the AHL.

Guys like Chris Minard and Bill Thomas and Paul Bissonnette have brought some energy into the Penguins line-up during their call ups.

But it hasn’t been enough.

The Pittsburgh Steelers walked into the Superbowl with the best defense in the league.  The Pittsburgh Penguins have a defense that can only be described as “soff,” to borrow a phrase from Michel Therrien.  During last year’s playoffs the Penguins were able to build a lead and then clamp down on the opposition.  This year they have allowed too many dramatic comebacks to take place at their expense.  The Pittsburgh Penguins are far too easy to play against.

I’m sure many of the Penguins were watching the Superbowl last night.  They saw a team from just across the Allegheny River win it all.  Maybe the victory inspired them.  Maybe Tomlin’s words rung true for Jordan Staal or Miroslav Satan or Max Talbot or anyone on the team’s defense.  Because if it didn’t, the Penguins are in for a very long, unhappy summer.

2 thoughts on “What the Penguins Can Learn from the Steelers”