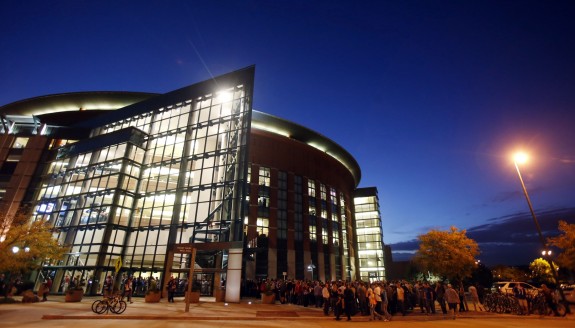 The Pepsi Center in Denver, Colorado will host playoff hockey for the first time since 2010. (Chris Humphreys-USA TODAY Sports)

For the Colorado Avalanche it was a year that was supposed to be fraught with growing pains. The Avalanche had a promising future, but inexperience and a lackluster defense meant that another year in the draft lottery was the price to pay for future success. No one anticipated what was about to happen. Colorado; on the eve of their first playoff game in Denver since April 24, 2010 ; are division champions. A division that should be noted, features the St. Louis Blues and defending champions Chicago Blackhawks. It’s been a remarkable year for the team. First year head coach Patrick Roy’s winning attitude seemed infectious. The team grabbed a hold of the Stanley Cup attitude that Roy promised and put together one of the best regular seasons in team history. There are questions going forward about the sustainability of this success in the playoffs, especially for an inexperienced team. But for now the team is more than happy to be playing for the Stanley Cup again.

As Colorado fans wait for tomorrow night’s opener with the Minnesota Wild, here is a look back at five games that defined a season.

This wasn’t a particularly pretty game for the Colorado Avalanche, but it was one that characterized their season and the way they were able to find ways to win despite playing poorly. In Patrick Roy’s opening press conference he said that he wanted the team to learn to win. Against Phoenix they certainly learned how not to lose. In Phoenix the Avalanche were off to a shaky start, but were saved by some strong goaltending by Seymon Varlamov. Colorado was out shot 15 to 8 in the first period but Varlamov kept the game tied at 0 through the first 20 minutes. The 2nd period started well for Colorado as John Mitchell scored on the powerplay less than a minute into the frame. As it was so often the case for Colorado this season, they were able to capitalize on their chances when their opponents could not. Towards the end of the period Andre Benoit scored his first goal for the  Avalanche to make it 2-0. It wasn’t long after though that Phoenix scored on a shot by Michael Stone that came from center ice. It was a rare mistake from Varlamov that seemed to take the wind out of the Avalanche sails. The third period was a mess for Colorado. Phoenix controlled the play for almost the entire period. The Coyotes scored twice to take a 3-2 lead. Colorado seemed to be completely rattled for the entire period. It wasn’t until very late in the period when Cody McCleod tied the game for Colorado and sent the game into overtime. In the extra period Ryan O’Reilly scored a power play goal to give the Avalanche the win. It was a poorly played game from Colorado but it was a game that showed how sometimes it’s better to be lucky than good.

It wasn’t always Varlamov who had time for heroics this season. Early in the year J.S. Giguere looked like the Giguere of old. The game in Boston was only the fourth game of the season. Colorado were off to a hot start and came into town against the defending Eastern Conference champions. No one expected Colorado to win a grinding, low scoring contest against Boston. In the years past Colorado seemed easy to play against. They were a team that could be intimated easily last season. Only four games into the season this year it was obvious that Colorado was willing to stand their ground. Apart from a Ryan O’Reilly deflection goal and a magnificent display of speed from Matt Duchene to ice the game with an empty netter the game was the Giguere show.  It was also an example of how well this team worked for Patrick Roy. Despite being out shot, which has been a theme for Colorado this year, the young squad didn’t let the big name opponent intimidate them. This game is also notable because it was the only time anyone all season had shutout the Boston Bruins. The game was a testament to the fact that Colorado could now grind out low scoring games as well as they could win the high scoring affairs.

All season Colorado were done in by the St. Louis Blues. Earlier in the season the Avalanche shipped seven goals against the Blues. St. Louis were tough, they were skilled and they recently made a trade to bring in one of the biggest names in goaltending, Ryan Miller. But Colorado needed to win. Their lead on Chicago in the standing was a thin one, and every game mattered. Colorado also saw this game as a way to exorcise some demons from earlier in this season. The last meeting between these two teams came weeks earlier in Denver, and in that game Colorado proved that they could they could stay with the big boys. They lost 2-1, but it was an encouraging performance. This time Colorado was ready to go in for the kill. The first period was a tense 20 minutes for Colorado. They were badly out shot, but as it was so often the case, Seymon Varlamov kept the game tied. The second period is when Colorado took over. An early power play goal for Paul Stastny opened the scoring, and then goals from Nathan MacKinnon and Nick Holden gave the Avalanche a 3-0 lead going into the third. Another tally was added by Ryan O’Reilly in the third and the Avalanche held on for a 4-0 win against the central leading Blues. Colorado showed they could throw one of the Stanley Cup favorites completely off their game. The third period was a chippy affair which saw a few game misconducts. Colorado did their best to remain level headed, and closed the gap between the two teams in the standings. The loss also started the Blues on their six game losing streak that eventually cost them the Central Division crown.

In all honestly any one of the games against Chicago could be used to describe the Avalanche season, even the 7-2 drubbing they took in Chicago. But what made this game so special is that Colorado overtook Chicago in the standings. It was something even the most optimistic Avalanche fan at the start of the season could hardly believe. Colorado had no business being ahead of the defending champions, but here they were. It was a typical game for Colorado, in rather atypical circumstances. Colorado had a 3-1 lead late in the game only to have to hold on in a dramatic ending after Chicago cut the lead to one goal  with less than three minutes remaining. So often this year the Colorado Avalanche have made this interesting late in games, but more often then not they have managed to hold on. The game ended 3-2 in favor of the home side, and as a result the Avalanche did the unthinkable and overtook Chicago in the standings. At the start of the season many predicted that these games would be far more important to Chicago than they would to Colorado. But the Avalanche who have always played the Blackhawks well turned the league standings on it’s head after the game.  It was the fourth win against the Blackhawks this season, and in the end it helped propel the Avalanche to home ice in the first round.

It all started with a push. For every team the first game of the season is always filled with optimism. For the Colorado Avalanche the first game of the season over flowed with optimism. The Ducks came in as a team many viewed as a team with Stanley Cup aspirations. In Colorado though, this game was all about the beginning of a new era. Not only was this the beginning of Patrick Roy’s coaching career it was also a chance to finally see rookie sensation Nathan MacKinnon. Neither one of them disappointed the home fans. MacKinnon showed flashes of brilliance with two beautiful assists in the 6-1 thrashing of the Ducks. As a whole the team played hard, they had scoring from just about everyone, the defense gave up some chances but overall they played a strong game, and of course Varlamov was exceptional. But of course the big story at the end of this game was Patrick Roy’s outburst towards Ducks’ coach Bruce Boudreau after a questionable hit on rookie Naton MacKinnon. While many said that this is the type of craziness that comes with Patrick Roy and his ego, but in reality it was much more. Since the incident on opening night Patrick Roy has been about as calm and level headed as anyone could want. But his team has played with the same passion that he showed on opening night. It’s debatable whether or not this was a random outburst or a calculated attempt to endear himself to his players. One thing is for sure, ever since that opening night Colorado Avalanche hockey hasn’t been the same.

However deep the Colorado Avalanche go in the playoffs, Avalanche fans have a lot of good to look back on this year. They were given very little to look forward to this season, and despite a defense that is not much to look at on paper, they have exceeded all expectations. The Avalanche now look towards Minnesota in the first round. For Patrick Roy and the Central Division champion Avalanche, they hope it’s just the first step in a long road.