With half of the 2011-2012 NHL season completed, the Minnesota Wild have looked like two different teams at times. Strong early season surges and long winning streaks propelled the Wild to the top spot in the Western Conference at one point. However, an untimely 8 game winless streak dropped the team to sixth place in conference standings by the middle of the season and has hockey fans alike wondering where the team will finish come April.

The Minnesota Wild started off the season with a 4-3-3 record through the month of October, but went streaking throughout the month of November and even into the early stages of December. By December 10th, the Wild were occupying the top spot in the Western Conference at 20-7-3 and Mike Yeo’s abandonment of the trap seemed to be paying dividends for the Minnesota club. The team was engaged in exciting games and often completed amazing third period comebacks behind solid goaltending and clutch scoring from players such as Mikko Koivu, Cal Clutterbuck, Kyle Brodziak, Dany Heatley, and Devin Setoguchi. Defensemen Jarod Spurgeon, Marco Scandella, Clayton Stoner, and Justin Falk all chipped in with various contributions to help ease the loss of Brent Burns and the team managed to maintain the defensive side of things for a long stretch.

However, the second half of December was pretty cold in regards to the Wild. A rash of injuries to players such as Mikko Koivu, Josh Harding, Devin Setoguchi, and Guillaume Latendresse greatly hurt the team as it did a nosedive in the Western Conference standings. An 8 game winless streak saw the Minnesota Wild drop four spots in the playoff standings as they relinquished their Northwest Division lead to the Vancouver Canucks. It certainly didn’t help to lose to every team within the division, but head coach Mike Yeo had a positive outlook on his team’s situation when he stated that the Wild needed to endure a losing streak sooner rather than later in the season. While the Wild are not accustomed to going through such spells this season, winning and losing as a unit can help build chemistry between teammates and the coaching staff. 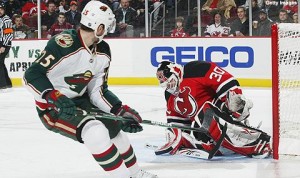 amazing hockey and had solidified themselves as a resilient team that had a knack for clutch third period scoring and strong physical play for 60 minutes of any contest. Mike Yeo had his team working hard and earning points across the board and the team was receiving contributions from all four lines. The most encouraging part of all of this success was evidenced in the fact that the Wild accomplished it without the trap and that the Minnesota players had bought into a new system from a rookie NHL head coach.

2.) Long winning streaks helped the Wild get off to their franchise best start and further showcased the cunning of head coach Mike Yeo. The Wild went on two 5-game winning streaks along with a 7 game win streak and were one of the hottest teams in the NHL despite having lost various players from parts of the lineup. During their 7-game winning streak, the Wild looked especially strong as they dominated play by winning 5 of the 7 games on the road. The long winning streaks helped bolster the Wild’s point totals and gave credence to the fact that this Minnesota team was able to combine timely scoring, great goaltending, and good defense in order to win games consistently.

3.) Goaltending remains a strong point of this season’s Minnesota Wild team. While goalies Niklas Backstrom and Josh Harding both missed some time due to injury this season, a young netminder by the name of Matt Hackett showed that he could man the Minnesota crease without problem. Hackett won two games in his short stint with the Wild, but all of the Minnesota goalies have been on par this season. Harding (2.03 GAA, .935 Save Percentage) and Backstrom (2.39 GAA, .923 Save Percentage) hold very respectable numbers thus far and have formed a formidable duo between the pipes. While Backstrom came into the season as the No. 1 goalie for the Wild, Harding has made a great case for playing time and could actually help keep Backstrom (groin issues) healthy by spelling him at times.

1.) An 8 game winless streak highlighted the low point of the Wild’s season thus far. The winless streak featured Minnesota losing to all of its divisional opponents and the team dropped several spots in the playoff standings as a result. After receiving great results on the road, the Minnesota Wild were unable to sniff out a road or a home win during their losing streak. A lengthy losing streak in the late parts of the 2010-2011 NHL season contributed to the Wild missing the playoffs for yet another year, but it was better that the Wild coped with such a losing streak before the mid-season mark.

2.) A plethora of injuries devastated the Minnesota Wild during the month of December and handicapped the team to some extent. The team was without Devin Setoguchi for some time and even players such as Casey Wellman, Mikko Koivu, Justin Falk, and Marek Zidlicky missed time due to various injuries. On the other hand, players such as Guillaume Latendresse tried to make their comeback to the Minnesota lineup only to be further hampered by post-concussion symptoms. Niklas Backstrom (groin) and Josh Harding (neck) also missed some time this season as the Wild experienced losses to nearly all parts of their lineup.

3.) Being ranked 29th out of 30 teams in terms of goals per game is one of the key “low-lights” for the Minnesota Wild. While the Wild have never prided themselves on being an offensive powerhouse, their lack of scoring has hurt them tremendously this season. Even though various components of Minnesota’s offense have missed time due to injury, the team has struggled to find consistent scoring outside of centreman Mikko Koivu. Dany Heatley, Devin Setoguchi, Kyle Brodziak, Cal Clutterbuck, and a slew of other players have chipped in with clutch contributions, but consistency is key and the Wild have had very little offensive consistency for the first half of the season.

The Minnesota Wild are a well-coached team and head coach Mike Yeo has done everything in his power to overcome adversity in the Northwest Division. Yeo has made the right call-ups when needed (Kassian, Hackett, and J. Palmer amongst others) and the “all for one and one for all” mentality stressed by J.B Spisso during training camp helped to form an identity for the Minnesota Wild. However, any NHL team, no matter how good they are, will face adversity at one point or another during a lengthy hockey season and the Minnesota Wild are not any different. Just like any other team the Wild have certain problems, but the team works hard in order to mitigate the lack of a consistent scoring punch.

As previously mentioned, the Wild rank 29th out of 30 teams in terms of goals per game and have a power-play that ranks 23rd overall in the league. While the Wild have gotten all four lines to chip in with points, the team lacks a legitimate scoring threat on a nightly basis and struggles to get scoring opportunities as well as shots on goal. The acquisition of Dany Heatley was supposed to provide the team with a scorer that wasn’t as injury prone as Martin Havlat and the right winger has posted 125 shots on goal (leads the Wild), but his 28 points (13 Goals, 15 Assists) in 42 games have the winger on pace to finish with his lowest point totals since a 31 game (25 points) ’03-’04 campaign with the Atlanta Thrashers. Mikko Koivu leads the team with 33 points in 38 games and is by far the best player on the ice for the Wild on a nightly basis as his +10 rating (best on the team) suggests that the Finnish center is not a defensive liability and is usually at the right place at the right time.

Similarly, the Minnesota defense has also provided some inconsistent play that has hurt the team. Only three of the team’s defensemen have a positive +/- rating (Falk, Stoner, and Zanon) at +10, while the remaining d-men (Zidlicky, Lundin, Schultz, and Scandella) boast a collective – 20 rating. The remaining defensive players (Spurgeon and Prosser) are neutral (0) in terms of their ratings, with Spurgeon contributing the most amount of offense for a defenseman at 15 points (2 Goals, 13 Assists). The loss of Brent Burns has undoubtedly left some holes in the Minnesota defense and the Wild definitely do not come close to having a Norris Trophy candidate on their roster. However, the Minnesota defense has kept the Wild in the majority of their games so far this season and deserves some credit since players such as Zidlicky, Falk, and Scandella have spent their fair share of time on the injury list.

In contrast, the Minnesota goaltending has been practically untouchable as all three Wild goalies have put forth spectacular play when called upon. Matt Hackett, Niklas Backstrom, and Josh Harding have been boulders between the Minnesota pipes and have been the most consistent part of the team during the 2011-2012 NHL season.

As of now the Minnesota Wild are teetering on a B, thanks in part to the long losing streak they endured before the halfway mark of the season. The offense gets a passing grade of a C because of the clutch scoring that enabled the team to climb the Western Conference standings during the early stages of the season. The Minnesota defense receives a B due to the fact that there has been inconsistent play on their behalf, but the defense has persevered at times and allowed the team to make many late period comebacks. Lastly, the Minnesota goaltending earns a solid A because they have held down the fort and are the main reason that the Wild are ranked 6th in the league in terms of goals against per game. All in all, the average of those three grades gives the Wild a grade of a B, but the team is barely holding on to playoff positioning in the Western Conference as they are only one point ahead of teams such as Los Angeles and divisional opponent Colorado. The Wild could easily be at a B- or even a C+, but head coach Mike Yeo has helped the team earn crucial points down the line that are still keeping the Wild in contention for a playoff spot.

Once again, shots on goal and legitimate scoring opportunities are something that the Wild must improve upon. The Minnesota defense could use some improvement, but the Wild cannot simply rely on spectacular goaltending to earn them a playoff berth. The second half of the 2011-2012 NHL season will not be an easy one for the Minnesota Wild and the team must make sure that they come to play 60 minutes of physical hockey every night in order to keep their playoff hopes alive.