Reports are beginning to pile up. Antti Niemi’s days as the Sharks starting netminder are all but done. With reported interest in Cam Talbot, Robin Lehner, and Craig Anderson, the Sharks have all but assured that Nemo will be wearing a different sweater next year. But is a new goalie enough to recoup the 22 points the Sharks lost between the last two seasons?

Early reports said that Doug Wilson is looking for stopper around the age of 25. This keeps in line with his desire to rebuild and get younger. Lehner (23) and Talbot (28) may not have extensive NHL experience, but both have displayed flashes of brilliance.

Talbot has lived in the shadow of some guy named Henrik Lundqvist for a while now. But when he has taken the ice, he’s been electric. Over the past two seasons, he ranks 3rd in 5v5 save percentage among qualified goalies. While he isn’t an established starter, he could be the guy to take a chance on. He’d be coming into a less demanding environment than New York. However, Talbot’s minor league record has given some pause onto whether he will be a genuine starter. 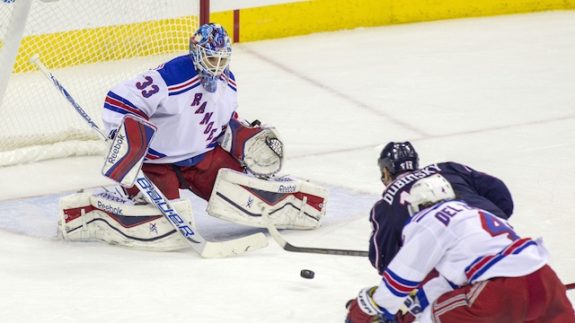 Lehner, while much younger, has had a rough go of things in the last year. A concussion derailed a strong break into the league. In that initial campaign, Lehner was posting a .929 save percentage after his first 1000 shots faced. Lehner is big, standing 6’4” is only one of the benefits of his game. But, his injuries early on are red flags for some. While a safer bet due to a more typical career trajectory, injuries with netminders are scary (see Rick DiPietro).

Those two goalie options are nice in comparison to what the Sharks have in house, but they are hardly a solution to their woes. The Sharks can’t defend. It seems, at times, they can’t even skate backwards.

Mueller has since been linked with extended stays back in the AHL. At least this season he won’t have to fly back to Massachusetts. With a regression from Justin Braun, the Sharks are only left with one defensive defenseman. Marc-Edouard Vlasic can’t be on the ice all the time, and when he’s got Brent Burns next to him even his defensive game will suffer. This leaves the defensive situation looking something like this.

The real thing Wilson needs to do to salvage his reputation and team is overhaul this defense. He’s never been one to make huge splashes in the free agent market. That needs to change. A blockbuster somewhere has to happen. Maybe a Joe Pavelski trade, maybe Burns too, and maybe somewhere in the draft. The Sharks have virtually nothing to work with in terms of draft picks this season, so the offense will have to take a hit. Either way, Wilson has to find some way to keep the puck out the net more than they did this year.