As the sport of hockey continues to grow and expand worldwide, so too do the professional leagues where the sport is played.

The National Hockey League is, without question, the best league in the world, and has usually drawn the best of the talent. It’s little brother, the American Hockey League, has long provided another professional league for hockey fans throughout North America, staffed largely by players on the verge of NHL graduation.

But the number of people that play hockey is increasing, and in turn this strengthens the quality of competition offered by other leagues; primarily, those in Europe. The Kontinental Hockey League, officially established in 2008 as a successor to the Russian Superleague, is the NHL’s closest direct competitor, and provides an intriguing alternative to the NHL for many players. The Swedish Hockey League and The Liiga (also known as the Finnish Elite League), both formed in 1975, have been around for decades, but now display a higher level of skill than ever before.

Even though the majority of the world’s best hockey players are currently residing in the NHL, there are a few notable exceptions that are working their magic in Europe right now. Here’s a rundown of the top five:

5) Anders Nilsson – Kazan Ak-Bars, KHL: Nilsson split the past three years between the New York Islanders and their AHL affiliate, the Bridgeport Sound Tigers, before heading to the KHL this season. The 6’5″ Swedish goaltender was never able to nail down a backup role in New York despite a handful of opportunities, but is excelling as a number one goalie this year with a sparkling .938 save percentage so far. He’s only 24, so if he can continue to be one of the best netminders in the KHL then he’s sure to draw the attention of some NHL teams again in the future. 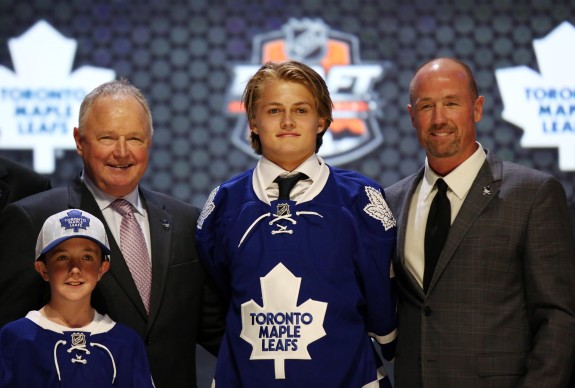 At only 18 years of age, William Nylander is already one of the best hockey players outside of North America (Bill Streicher-USA TODAY Sports)

4) William Nylander – MODO Hockey Ornskoldsvik, SHL: Nylander is only 18 years old, but is already one of the most talented, electrifying players in the SHL. Despite his rail-thin frame he’s already managed to put up 14 points in 11 games in Sweden’s top professional men’s league. As recently noted by The Hockey News’ Matt Larkin, that kind of production puts him in a special class for that league alongside Swedish hockey legends like Peter Forsberg, Markus Naslund and the Sedin twins. Selected 8th overall by the Toronto Maple Leafs in the 2014 draft, Nylander’s arrival in the NHL is moreso a matter of “when” instead of “if.”

3) Vladimir Sobotka – Omsk Avangard, KHL: A solid, effective two-way center for the St. Louis Blues for the past few seasons, Sobotka decided to head for more financially lucrative fields this summer when he signed a three-year deal in the KHL. The Blues still hold his NHL rights, but there was bad blood between the two sides during contract negotiations this summer, so it remains up in the air whether or not Sobotka will ever return to the NHL.

2) Alexander Radulov: CSKA Moscow, KHL: Radulov’s short-lived time in the NHL will go down in infamy, and Nashville Predators fans will probably always harbor a bit of resentment towards him, but it’s impossible to deny that the 28 year-old Russian is one heck of a hockey player. He already holds a number of KHL records, including career points (322) and points in a season (80), and is still going strong, leading the league in points so far this season with 44 in 27 games. On home soil, the marquee star of a burgeoning young league, and making roughly $9.2 million U.S. each year, it’s unlikely that Radulov will ever play in the NHL again.

Ilya Kovalchuk was a superstar in the NHL, and is now finding the same success in the KHL (Icon SMI)

1) Ilya Kovalchuk – St. Petersburg SKA, KHL: A three-time NHL All-Star and former winner of the Maurice “Rocket” Richard Trophy, Kovalchuk used to be one of the league’s preeminent superstars. Which is what made it so shocking when, in the summer of 2013, Kovalchuk “retired” from the NHL at the age of 30, leaving the remaining 12 years and $77 million of his contract with the New Jersey Devils on the table. That this happened months after Kovalchuk helped the Devils to the 2012 Stanley Cup Finals, where they were dispatched by the Los Angeles Kings, only increased the shock factor. Citing a desire to go back to his home country with his family, Kovalchuk signed his KHL contract a week later and has been playing there ever since. He has 39 points in 28 games this season, and at only 31 years of age he still has many good hockey years ahead of him. Could those remaining players years see him make a return to the NHL one day?