You can forgive goaltending prospect Robin Lehner if he wakes up each morning wondering what city he is in… While he knows that he will have a Senators logo on his jersey, on any given day, he does not know if he will be wearing the Ottawa version or the Binghamton version.

A second round selection (46th overall) in the 2009 NHL Draft, Lehner is considered a legitimate prospect for the Senators; the “goaltender of the future” that the organization desperately needs. Unfortunately, he has spent the season travelling between Binghamton and Ottawa, with a quick pit stop in Buffalo to join Team Sweden for the World Junior Championship. In his short pro career, he has already logged a lot of travel miles. Will this delay his development, or has it taught him a valuable lesson about the business side of hockey? 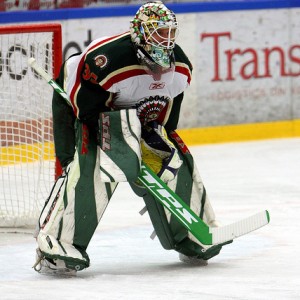 After a strong showing in the pre-season, the Senators expected Lehner to spend the year in the American Hockey League with Binghamton, developing and learning the ins and outs of being in the pro-game. Last year in the OHL with the Sault Ste. Marie Greyhounds, he was the number one goaltender on a team for the first time in his career. His numbers were impressive as a starter (27-13-3, 2.80 GAA, and a .918 save percentage), and even though he was eligible for a return to the OHL, the team was eager to learn how the young man from Gothenburg, Sweden would perform at a higher level of hockey. By playing against the prospects and veterans in the AHL, the Senators hoped to discover more about their young prospect – is he ready for a full time job in Ottawa next year?

While the AHL plan was a good one, the continuing fragility of Pascal Leclaire has forced the organization to hit the “emergency recall” button on more than one occasion. Even though the club is struggling this year and falling well out of the playoff hunt, they have been reluctant to start Lehner during his time in the NHL and he has spent far too much time on the bench as the backup goaltender. He made his first start in the NHL on Friday evening (a 6-4 win over the New York Islanders), but on Saturday he returned to Binghamton for a game against the Manchester Monarchs (a 4-3 loss for Lehner and the Sens).

The question in Ottawa concerning Lehner now is, what is more harmful to his development – the constant trips between Ottawa and Binghamton or letting him start in the NHL on a struggling team?

While some say his confidence may take a hit if he starts on a regular basis in Ottawa, there are positives to the situation. There is no doubt that Pascal Leclaire will not return to Ottawa next season. Brian Elliott is a RFA this summer and there is some discussion that he may be moving on as well. That could leave the Senators with no goaltenders with NHL experience and a goalie of the future that has never truly been tested. As for his confidence, Lehner is a young man, eager to learn and demonstrate that he belongs in the league. Elite level players want that challenge; they want to prove they are the best option at their position. It is hard to believe that playing with the Senators this year would damage the young man mentally. If it does, what does that say about the state of this franchise?

If the goal of any NHL team is winning games, especially for a coach and GM on the hot seat as Cory Clouston and Bryan Murray are, Lehner could prove to be a better solution to the goaltending woes than their current options. With only one win in their last nine games, Brian Elliott is on an eight-game losing streak and his numbers do not reflect those of a quality number one goaltender (12-16-6, 3.08 GAA and a .900 save percentage).

The future is now for the Ottawa Senators, they will not be playing meaningful games in April. Although the season has been disappointing, they will have plenty of cap space this summer to shuffle the deck and invest in new talent. It is time for the Senators to see what they have in Lehner, playing in the NHL cannot be any more damaging than the constant back and forth between cities, teams, and leagues.

One of the highlights of Lehner’s young career was a shootout win with team Sweden against Team Canada at the 2011 World Junior Championship in Buffalo, New York.

Lightning: Checking in on the Struggling Crunch