October opened with a bang.  Fifty-one seconds into their season opener on the road at the Hartford Wolf Pack, Scott Timmins buried the puck to give the Devils an early one goal lead.  Unfortunately, although the Devils led the game in shots 26-22, the Wolf Pack managed to rally and beat the Devils 4-3.  Despite the opening night setback, the Devils had an opening month to remember.

A Revamped Roster, A Stunning Start

The roster has changed considerably since the Devils ended last season and the newcomers have provided Albany with much more speed and firepower than they have had in years.  The additions of Timmins and rookie Reid Boucher have altered the Devils presence up front.  Timmins has registered a point in every game thus far this season.  His current nine-game point streak is tied for the league lead with Travis Morin of the Texas Stars.  His streak is also the longest to start a season in Albany Devils history.  He is one game shy of tying the all-time Devils point scoring streak held by Michael Swift who notched a ten-game streak during the 2010-11 campaign.  While Timmins is exceeding even his own expectations, line mate Boucher is steadily living up to the hype that surrounds him.  He has put up three goals and five assists thus far. Two of those goals came in the final two games of the month.

Yet, despite the enormous impact of these two forwards their top offensive star, once again, is Joe Whitney.  He led the team in points in each of the last two seasons and through the opening nine games has tallied identical totals as Timmins, each with five goals and eleven points.  Whitney has even shown some snarl this season and has 10 PIM, tied for third among Albany forwards.  Whitney also leads the team with a +6.

Defensively, the Devils started this season strong but have slipped as of late.  The Devils only gave up more than two goals once during their first six games but have given up at least three in the last three games including a season-high five to the Portand Pirates on October 26th.  Initially they were led by Eric Gelinas, who tallied three points including one goal in five games.  He was the quarterback on the power play and his vicious slap shot helped Albany tremendously until he was recalled to the New Jersey Devils after the injury to their captain Bryce Salvador.  With Gelinas in the lineup the Albany Devils went 5 for 24 on the power play.  Since Gelinas was promoted, Albany has scored just 2 power play goals in 23 chances.

Jon Merrill has since taken command of the Devils on the back end.  Merrill has notched seven points through nine games which is tops among defensemen but has seen his +/- dip to an even rating after a positive start.  Reece Scarlett has been strong for Albany and currently leads the Devils defense with a +2.  Seth Helgeson and Dan Kelly are the only two defensemen other than Gelinas and Merrill with multiple point totals in October.  Each player has two assists.

Keith Kinkaid started four games for the Devils and recorded a pair of victories.  His GAA is a splendid 1.97 and he has a save % of 0.912, an increase of 0.01 over his career average.  His backup, Scott Wedgewood, has been thrust into the top spot with the emergency recall of Kinkaid to New Jersey.  Wedgewood gave up just a goal per game through his first two starts this season to the Adirondack Phantoms and Norfolk Admirals.  The Devils won both of those games.  However, in his most recent three games he has struggled with ten goals against and two losses.

*The second period has been Albany’s best period.  They have scored ten goals while only allowing three goals.  The third period, however, has been scary for Albany as they have surrendered 12 goals and scored a meager total of five.  As the clock winds down and the pressure increases, the Devils have to take command of the final 20 minutes of regulation.  They may have won five of nine games but if their third period numbers remain this abysmal, it will get late early for the Devils.

*Despite being matched up against the top defensive pairing on a nightly basis, the Boucher-Timmins-Whitney line has continued to rack up points.  Also, every forward for Albany has at least one point.  If Albany wants to remain high in the standings they need more production from their forwards not named Timmins, Whitney, or Boucher.  Chris McKelvie has three points, one goal and two assists.  He is fourth on the team in points amongst forwards.  Harri Pesonen is third on the team in shots with 25 and does not have a goal.  He failed to score on two penalty shots against two different goaltenders in the Devils last win against Hartford.  Pesonen has to step up and start finishing.

*Gelinas is playing excellent for New Jersey.  Adam Larsson, one of Albany’s top defenseman for the first half of last season, has picked up his game tremendously with Gelinas as his partner.  Unless Gelinas play falls off, it looks like he will be in New Jersey to stay.  Brandon Burlon has mustered a single assist and is a -1 for Albany on the year.  Last year he picked up 17 points, 16 of those were assists, in just 53 games.  He was also a +9.  Now in his third season with the Devils, he must step up and help Albany absorb some of the hit the team took with the promotion of Gelinas.

Breaking Down the October Slate

After a tough opening night loss, the Times Union Center hosted their first Albany Devils game of the season and the Devils did not disappoint.  They defeated their new rival, the Utica Comets, by a final of 3-2. Boucher notched a goal, Whitney had the game winner, and Timmins led the way with two assists.  The team combined for a game total of 66 penalty minutes.  However, oddly enough, not one penalty was called after the opening frame.

The Devils swept their two-game home stand and got a jump start in the chase for the Time Warner Cable Cup by spooking the Adirondack Phantoms 4-1 just two day later.  Adirondack led the game in shots 25-21.  Tim Sestito was the first star of the game and rightfully so. He had a pair of goals including this game-winning shorthanded penalty shot goal in the first period. 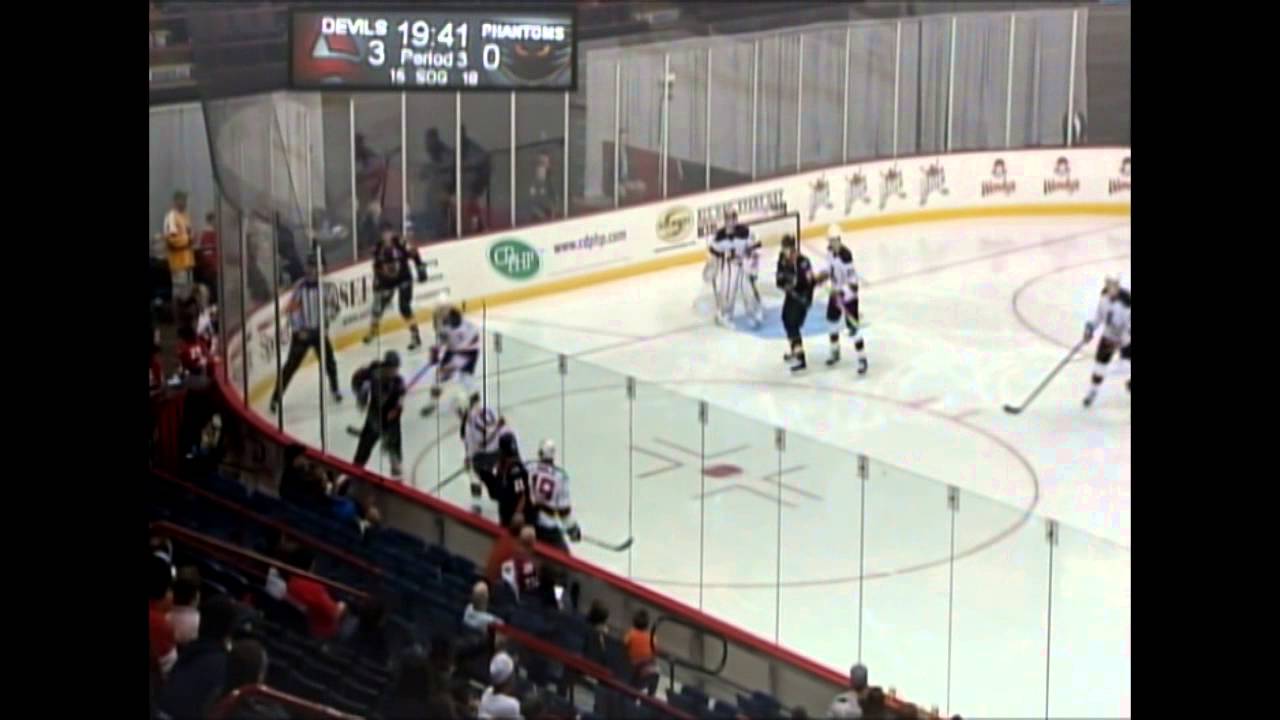 The Devils went down to Norfolk and dominated the shot totals in both games.  However, through six periods of regulation hockey and two overtime periods, each team only scored two goals total.  Gelinas scored one goal while assisting on the other.  Timmins scored the other while assisting on the goal by Gelinas.  The primary assists on both goals were picked up by different players, Merrill and Whitney.  The Devils lost the first game but won the second of the back-to-back set with Wedgewood in goal.  Both games went to a shootout.

Following their trip below the Mason-Dixon line, they returned upstate and defeated the Comets in Utica.  Whitney was the top player in this game with two goals and an assist as well as a +3.  Kinkaid stopped 22 of 23 shots.

Returning home for the start of a four game home stand, the Devils played their final three games in October.  They opened with a 4-3 win over the Wolf Pack.  After entering the second period tied, they scored three goals including Stefan Matteau’s first goal as an Albany Devil.  The Wolf Pack scored twice in the third period and threatened to send the game into overtime but Wedgewood slammed the door as the Devils held on for the win.  With the victory, they were momentarily tied for the top spot in the Northeast Division.

Highlights from the Devils victory against their rival from Hartford: 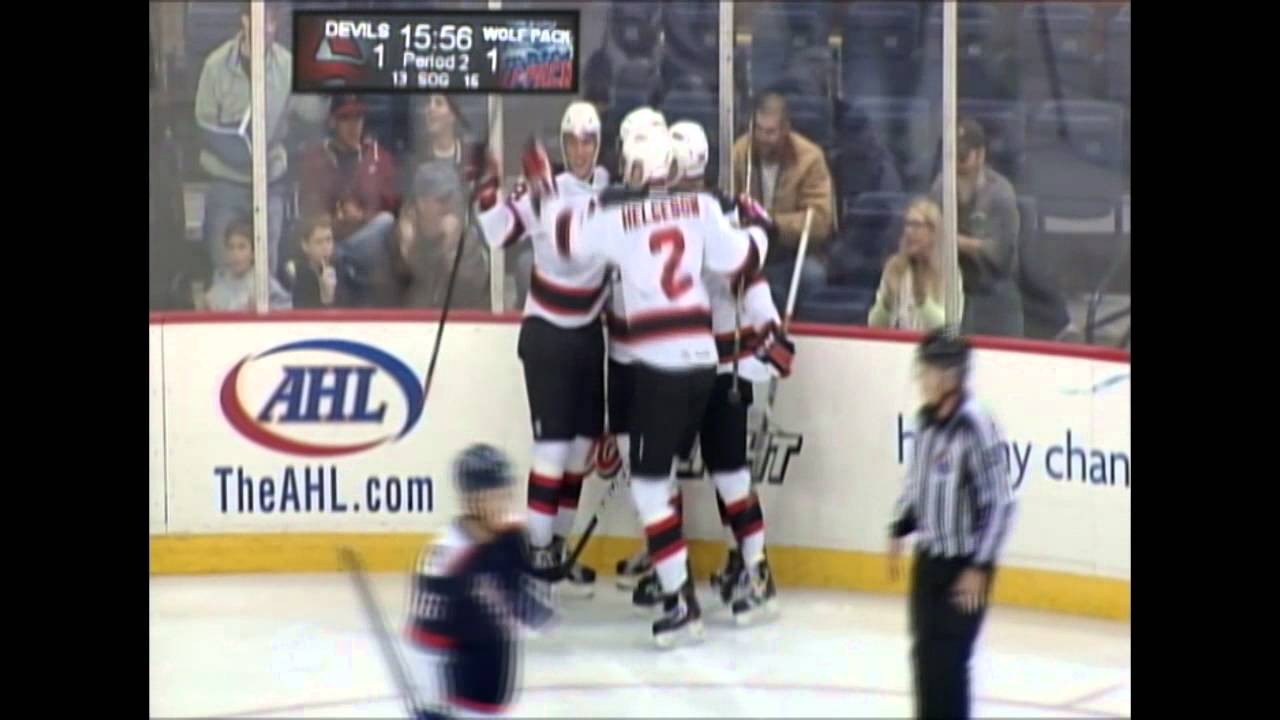 With Kinkaid being on emergency recall to New Jersey, Wedgewood got the start in his place for the next game against Portland.  The Devils battled for most of the game and despite a high shot total could not generate quality scoring chances.  They rallied to tie the game twice and looked to take command midway through the third but the Pirates called a timeout.  They were able to halt the Albany momentum and shortly after the Devils killed off a questionable penalty to Helgeson the Pirates went ahead for good.  Two empty net goals made the score look worse than it should have been.

Nikita Kucherov singlehandedly took control of the Devils final game of the month for the Syracuse Crunch with two goals and two assists.  The Devils again outshot their opponent but their special teams failed them in this battle against the defending Eastern Conference Champions.  They went 0-6 on the power play and gave up two power play goals to the Crunch.  The Devils top line was responsible for their only goal. Boucher scored with Timmins and Whitney getting the assists.

…the Devils are 5-3-0-1 with 11 points. They stand third in the Northeast Division and seventh in the Eastern Conference.  They are just four points away from being tied with the Wolf Pack for the division lead.  They have 24 goals for and 23 against, which ironically is one more than the amount they surrendered last year after nine games.  On the bright side, they had scored just 16 goals last year at this time.

The Devils will look to regain their hot start as the temperature outside Times Union Center continues to fall.  The Devils finish their home stand against the Norfolk Admirals on Friday night before continuing their rivalry against the Phantoms in Glens Falls the following night.  Albany will play the Phantoms four times this month including two games the week of Thanksgiving.  November promises to be an exciting month for the Albany Devils!