There probably hasn’t been a more polarizing player than ex-Montreal Canadiens defenseman P.K. Subban in recent memory. That statement seems to apply to most every demographic too—fans, coaches, opponents, general managers—except one: people who have actually played with him before.

That even includes current-Habs captain Max Pacioretty, who was rumored to have helped orchestrate the Subban trade behind the scenes, due to a rift between the two. So, what did Pacioretty have to say when asked about Subban being dealt?

“We lost a friend, and hopefully we gained another [in Shea Weber],” Pacioretty said, adding that he called up Subban, who had attended his wedding, not five minutes after learning about the trade.

This would run counter to one account, which had been reported upon and had Pacioretty instead texting Subban a ‘Dear John’ letter, complete with a laundry list of issues he had with the defenseman, immediately after the trade. While that’s no doubt possible, it seems unlikely a personal text message of that nature between the two would be leaked to a close mutual friend let alone the media.

He Said, He Said

So, who do you believe in this situation? A reporter who’s a few degrees separated from Subban here, arguing that he was a problem in the locker room and the Habs were at least partly justified in making the trade, despite lacking any hard evidence. Or the actual source in Pacioretty?

At this point, it’s worth noting that a few months later a separate journalist, reporting on events that painted the team in a negative light instead, without any evidence to back up his claims, ended up being let go from his position.

Granted, Pacioretty may have reason to lie and make him and Subban seem like best friends. If you were in his shoes, you probably wouldn’t want to respond to difficult questions on the matter truthfully, especially when the answers could make you seem Machiavellian, to put it mildly. He would also have to keep up his appearance as a professional, especially seeing as he is the team’s captain. Above all else, though, Pacioretty is still a Hab. If there were issues with Subban, it would be part of his job to keep them in-house.

However, on the other hand, if there were any issues and Subban was as disliked as some fans and media types are suggesting, ex-Habs who also played with Subban should have no real reason to deny any claims at all to that effect. And, yet, here we are.

If one ex-Hab isn’t enough for you, have another on the house in current-New Jersey Devil Devante Smith-Pelly. Following his move to Jersey, he denied anything transpiring between Pacioretty and Subban, calling it “one of the closest rooms I’ve ever been in.”

Finally, ex-Habs goalie Ben Scrivens echoed similar sentiments in a mid-July edition of The Steve Dangle Podcast, arguing Subban was an easy target for criticism from the outside looking in, because of how vocal he is. However, he also denied that Subban was a bad teammate and said he is both welcoming and generous and a player who brought it every night, no matter the circumstances.

So, can we be rid of this narrative of Subban being a locker-room cancer already? Even if you want to argue that each of the latter two accounts hold close to no water, because they might hold a grudge with the Habs for being traded/not re-signed, you have to admit Weise has just as good of a reason to choose head coach Michel Therrien’s side here instead of Subban’s.

Subban may be Weise’s close friend by his own admission, but Therrien helped Weise develop into a fringe top-six forward and earn his current four-year, $9.4 million contract. And if Subban was such a problem, a me-first teammate who only cared about promoting his own personal brand over the team’s performance (a claim that was already contradicted by Scrivens), man, he sounds like one of the last people you would want as a friend.

However, he’s Weise’s friend. He was at Pacioretty’s wedding. We know he continually triple low-fived Carey Price after victories, before Therrien put a stop to that. All tangible, non-rumor-related signs point to Subban being liked within that dressing room. So, why do his critics insist on perpetuating this narrative that Subban was a bad apple?

Of course, for many of these critics, Subban’s pledge to donate $10 million to the Montreal Children’s Hospital wasn’t enough either and a potential plot to buy the captaincy, so this lunacy is not completely unexpected.

You can definitely argue that this was a hockey trade (one that has benefited the Nashville Predators too so far). And there might be something to that, with Weber’s style of play being a better fit within a defensive system that focuses on protecting Price.

You can even argue that it was a personality trade, as Subban recently called it, instead. And there may be something to that as well, with Subban’s flamboyance perhaps distracting from the organization as a whole. But to imply it was a trade that absolutely had to happen to ensure the team’s future success is both ludicrous and ignorant of the past success the team, which made it to the Eastern Conference Final twice with Subban on the blue line. 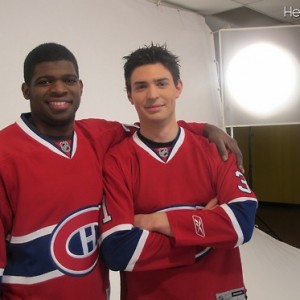 It’s meanwhile nonsensical to argue the trade is the only reason the Habs are 4-0-1 entering action Monday night, when Price is back healthy… and they went 9-0 to start last season (with both Subban and him in the lineup… and Mike Condon starting two of those nine games to the three Al Montoya has played this year so far).

In other words, it’s way too early to properly assess the trade’s long-term ramifications for the Habs. It’s meanwhile impossible to definitively state Subban was a problem when so many people who know him personally and professionally are saying just the opposite.

Occam’s razor postulates that, when presented with two explanations, the simplest is more likely, or that, the more assumptions you have to make to explain one, the less likely it is instead.

Is everyone who’s been asked about Subban since the trade lying about his character to preserve the public image of an ex-teammate? Or are they simply telling the truth, that there’s nothing there, no matter how badly one might need a scapegoat to help justify what otherwise would seem like a bad trade made by the Canadiens?

Nah… As Weise would say, that would be too easy.