The St. Louis Blues are currently in the middle of the longest NHL All-Star break out of any team (over 9 days), and while fans reflect on how well the team has played this season, it’s time to look forward to the saddening time of year where more outdoor games are announced without the Blues being involved.

Most fans have already heard the news, unofficially, that Boston will host next year’s Winter Classic at Gillette Stadium, most likely against their long-time rival the Montreal Canadiens. Fans around the area are also already steaming about the ‘State of Hockey’ receiving a Stadium Series game next season, as the Minnesota Wild have reportedly asked to play the Chicago Blackhawks, which would mark the Hawks’ 4th outdoor game as an organization, and 2nd within 1 years’ time (actually a little over a year by the time the game is played). Next fans heard about the Colorado Avalanche being granted a game, but they will likely play former semi-rival the Detroit Red Wings, who have also played in 2 Winter Classics already, and who aren’t even in the same conference as the Avalanche any more (which is understandable for a Winter Classic matchup, but not for a Stadium Series game).

The Blues being left out of the outdoor game conversation has, until this point, been relatively unsurprising given the team’s history of Cup-less seasons and their ‘small hockey market’ fan base. Knowing that, what makes the snubs for next season any different, and why are fans more riled up than usual?

Blackhawks playing in another outdoor game? Why doesn’t the NHL give any love towards a team like the Blues?

The Blues Deserve an Outdoor Game…Soon

What makes this year’s outdoor game snubs even more bitter for fans is the fact that the Blues are currently one of the best teams in the league, their fan base isn’t exactly small in terms of market size, and the organization is now one of the only franchises that is able to host such a large event, yet they have never been offered it. Add in the fact that the Blues have been among the top teams in the league (to finish the regular season at least) for the past few years and it becomes clear why so many Blues faithfuls are up in arms about these coming announcements. 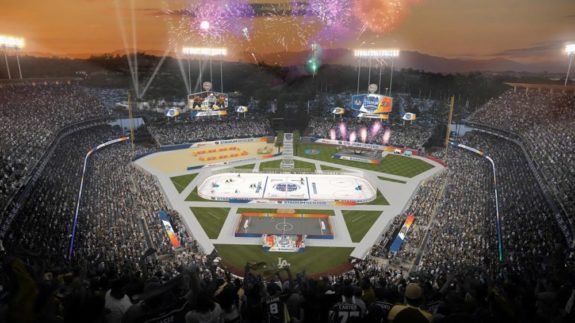 The Stadium Series in LA went off without a hitch, and weather certainly wasn’t an adverse factor to deal with. (Photo Credit: NHL)

St. Louis has Busch Stadium, the perfect place for an intimate yet large outdoor game, whether it be a Winter Classic or a Stadium Series game, they have enough fans locally and nationally to support such a game, the weather is ideal for a winter game outdoors, and they have some of the most heated rivalries in all of sports between the Blackhawks and the Red Wings, 2 teams whom the NHL seems to love granting outdoor games so what gives (the Blues also have great rivalries against the Nashville Predators, LA Kings, and the Colorado Avalanche as of the last several years). What gives, is a lack of flexibility with the league and the St. Louis area combined. While no one can answer the question to why the Blues haven’t even been selected to participate in an outdoor game being such a storied franchise, they can speculate about the reasons the city has never hosted one.

The Blues are fortunately in a city run by Anheuser-Busch, it’s the city’s history, and it’s awesome. Unfortunately, a rival brewery, Coors, is behind the entire line of Stadium Series games which means that Busch Stadium, and possibly even all of the St. Louis area in general, will not be considered as a viable venue for these events. Coors isn’t even allowed to sell their products at Busch, and most likely won’t be able to at the newly proposed football stadium on the river, which will be highlighted shortly. This means unless the team is invited as a visitor to a Stadium Series game, which is a long shot given this season’s announcements about these games, they won’t be included in one in the foreseeable future.

As stated earlier, Busch Stadium provides the perfect setting for a Winter Classic type of game, giving every fan a high quality view of the action on the ice, and can seat over 47,000 people which, excluding the year Detroit hosted it at University of Michigan’s Big House (105,491 in attendance), would be the 3rd most people to attend the event since its inception in 2008. The downtown area Busch is in has also been revamped since the opening of Ballpark Village, and various other eat and drink-eries around, which means more money for the city, and a better overall experience for the fans.

If for whatever reason the NHL still wants to steer clear of Busch, in a couple of years they may have a brand new 64,000 seat facility on the Mighty Mississippi to consider as well. However, all of this could be moot if the NHL wants to keep one of their biggest sponsors (Coors) happy, as the new football stadium may be owned (at least partially) by the AB-InBev giant.

With the NHL’s drive towards ‘big hockey market’ areas and large facilities gaining the bulk of these games there doesn’t seem to be much hope for fans in St. Louis to be a part of an outdoor game in St. Louis soon, but team owner Tom Stillman is tirelessly working toward getting the team in an outdoor game as early as 2017. Though fans around the area already know their chances for an outdoor game in 2015-16 have perished (despite the official announcement that is to be made during the All-Star game on Sunday), they do have some light at the end of the tunnel.

Stillman recently told St. Louis Blues’ beat writer Jeremy Rutherford that he is actively pursuing an outdoor game, which means good news (eventually) for a city in desperate want of one of the greatest events in the NHL’s storied history. Most fans would settle for being named as a visiting team to a game after seeing teams like Pittsburgh and Chicago in so many of these contests already, but it is nice to know the team’s owner is doing everything in his power to get an outdoor game in the area.