Gratton, a 1970s goalie also known as Grattoonie the Loonie, was actually on to something. Intelligence–real-world, applicable smarts–has never had much of a place in hockey. The only intelligence that has ever mattered is hockey IQ, or hockey sense. And that was strictly a commodity among the players.

Statistics in hockey meanwhile have largely been a sideshow. My 1998 version of Total Hockey is 1878 pages mostly devoted to player registries stacked with the statistics we’re all familiar with. There’s even a chapter on the Evolution of NHL Statistics written by the league’s first full-time statistician, Ron Andrews.

With the publication of Rob Vollman’s Hockey Abstract, that chapter becomes a rather quaint read.

I am the son of a man who had advanced degrees in math and statistical analysis. None of it was passed down to me. I approached Vollman’s book from a populist standpoint: If terms like Fenwick and Corsi make you change the subject or leave the room, we are one.

This is important because the few reviews I’ve seen thus far on the book appear to be written by people who already get it. They review the book not as a statement on a new system of understanding hockey, but as a relative statement on an existing system. 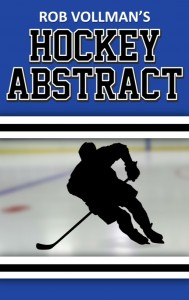 The average reader will get much more out of Vollman’s book if he or she remembers, before flipping one page, that no matter what he writes about, underneath it all is still the game of hockey. That foundation, believe it or not, is easy to forget.

The author is a co-founder of Hockey Prospectus, has written for ESPN, and has a high profile in the hockey community. In the introduction he sets a high goal for himself–to write the hockey equivalent of Bill James’ Baseball Abstract, a book that would in time turn professional baseball upside-down and completely re-frame how almost everyone in that sport, from owners and managers down to the fans, saw their game.

I have never read Baseball Abstract, so I can’t evaluate whether Vollman has achieved this aim. I can only really evaluate him from the perspective of a reader and a hockey fan.

The book is arranged to address a series of ten questions, including:

Vollman sets about answering these questions (and five others) by using advanced statistical analysis. The average reader is likely best served tackling these sections one or two at a time.

As a writer, he’s  … how do I put this … he’s gentle. Despite presenting a compendium of methods to fully re-examine the game we love, there’s not a trace of arrogance in his tone. He’s not writing for the insider; he’s not interested in leaving the ordinary reader behind. This isn’t some haughty academic overrun by the awkwardness of human interaction; rather, he writes like he genuinely loves the topic, so much that he’s careful to present it properly.  In fact, his ability to achieve this tone is, to me, one of the book’s minor miracles.

We already know that the advanced statistical methods discussed by Vollman are being used by teams in the National Hockey League. A much-traveled recent piece from Fear the Fin confirms this. More tellingly for me though is not that article, but this report card on Tyler Seguin over at Stanley Cup of Chowder. Here is an article written for a general audience that almost exclusively relies on advanced stats to make its argument.

Plus/Minus, it looks like it’s time for you to go.

Rob Vollman’s Hockey Abstract is available at Amazon.com
or via PDF at HockeyAbstract.com