The NHL offseason is in its busiest stage with the NHL Expansion Draft and NHL Entry Draft right around the corner. Once the Expansion Draft is complete and all 31 NHL general managers have an idea of where their teams stand, the next big task will be the 2017 NHL Entry Draft. The Draft is often the time of year when some of the bigger moves and shocks take place – be it in the days and hours leading up to it or the days following. 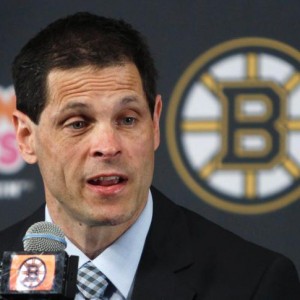 For the Boston Bruins and general manager Don Sweeney, this year’s draft will be a bit different than it has been in recent years. In his first draft with the team in 2015, Sweeney accumulated and subsequently used three first-round draft picks following the trading of Dougie Hamilton and Milan Lucic. In his second year at the helm, Sweeney had two first-round picks – one of which was used to select potential superstar blueliner, Charlie McAvoy. This season, Sweeney has only one first-round pick but has a cupboard full of assets to use to make a splash if he feels inclined to do so. Assuming Sweeney doesn’t make a trade, however, the Bruins will have six picks to make this year.

Six picks in the draft match Sweeney’s total from the 2016 NHL Entry Draft. For the first time in his tenure as the general manager of the Bruins, however, Sweeney doesn’t hold the 14th overall selection. It’s a trade off Sweeney would make again and again, however, as the experience gained from making the playoffs was invaluable to the team. In his first two drafts, Sweeney made a total of 17 draft picks, five of which were in the first round and four in the second round. With just one pick coming in both the first and second round this season, Sweeney will have to determine exactly what his club is looking for and who the best players available are.

Heading into the draft, the Bruins are looking loaded at a few positions in terms of prospects within the system. From left-handed defenders like Jakub Zboril, Jeremy Lauzon, Ryan Lindgren, Rob O’Gara and Matt Grzelcyk to left-wingers like Anders Bjork, Danton Heinen, Jake DeBrusk, Peter Cehlarik, and Jesse Gabrielle, the Bruins are set in that department. With that being said, if the best available player by the time they draft fits one of those two positions, the Bruins shouldn’t shy away simply because they don’t fit another positional need.

While the Bruins do have some center depth in the form of Jakob Forsbacka Karlsson, Trent Frederic, Ryan Donato and Ryan Fitzgerald, the team could still use another center to develop for the eventual day when Patrice Bergeron and David Krejci simply can’t do the job anymore. For Bruins fans, the hope is that such a day is far away in the distant future. For the Bruins management team, planning for that day is something that needs to be done now.

When looking at the Bruins prospect pool, the position that is the weakest, however, is right wing. Making just two right wing selection in the last four drafts, the Bruins are limited to just Zach Senshyn developing as David Pastrnak is already tearing up the NHL. If a solid right winger falls to the Bruins at pick No. 18, they should give it some serious consideration. Additionally, right-handed defender depth is weak in the Bruins prospect pool due to Brandon Carlo and McAvoy making the jump to the NHL so quickly.

Based on where the Bruins pick in the first round, the following players could be options for Boston with the 18th overall selection. Some of the options will be best-player-available, some will be best suited positionally and some will just happen to line up as both.