On Wednesday night in Beantown, the Boston Bruins and Washington Capitals engaged in what is the first of three Game 7 contests that will end the first round of the NHL Playoffs. Just like 14 games before it, the game went into overtime, and even assured that all seven games would be decided by one goal, a new NHL record.

Shortly into that overtime frame, Capitals forward Joel Ward, a no-show for most of the series, ended up scoring the game winning goal on a play that some fans thought should have been ruled a goaltender interference infraction against Mike Knuble. It wasn’t and the upset was complete, ensuring that the last four Stanley Cup champions would all be spending the second round watching from the sidelines instead of the front lines.

Naturally, the Capitals’ win set off a blizzard of comments on social media sites, with Bruins fans bemoaning their loss and Caps’ fans expressing their jubilation over their team’s improbable victory.

One other thing the victory did, however, was give voice to an angry group of fans, and their words were not in the spirit of good-natured sports banter. Instead, they helped drive home the point once again that despite all the advances we have made as a society, there are still people in the world who question just how much we’ve evolved from our knuckle-dragging ancestors.

Ward, a Canadian player who happens to be black, scoring the goal unleashed a wicked stream of racist comments from angry fans. They included this gem by Twitter user @Grizzlymarshall (these names are being included in case you’d like to let the users know how you feel about their choice of words:

There was also this piece of comedic gold by user @joepelosi:

Now, before we start into anything else, there are a couple of things that need to be kept in mind here. The first and most important is that, obviously, these tweets do not represent a majority, or even some significant minority, of Boston Bruins fans. These folks are obviously very foolish in their choice of words, and hopefully they will be held accountable in various ways, but the fact of the matter is that to paint with a broad brush and insist that this fanbase is depraved and racist because of the actions of a couple of knuckleheads with a propensity for using keyboards before brain cells would be a foolish mistake.

The second thing to keep in mind is that this is NOT a Boston-specific thing. There were plenty of fans who were mocking Boston for the actions of these dopes, but the fact is that it wasn’t even all Bruins fans who were saying these deplorable things. There were at least two people in the story on Chirp Story whose Twitter accounts were adorned with all sorts of Philadelphia Flyers colors, and a couple also had Detroit Red Wings pictures on their pages.

To say that your fanbase is innocent from this kind of chicanery is not only intellectually dishonest, but it is also incredibly foolish. There are plenty of misguided souls in just about every team’s group of fans, so the high and mighty talk that some displayed was silly and misguided.

Finally, the irony that seems to be lost on these fans is that Willie O’Ree, who broke the color barrier in the NHL, did so by playing for the Boston Bruins. These fans who let loose with these terrible statements are a stain on the game, and the fact that the racist charges were led by fans of the team that O’Ree played for is a sad statement about the mentality of some people who follow the NHL.

That, perhaps more than anything else, is the overarching theme here. This is a hockey-wide issue, and while the efforts of groups like Hockey Against Hate and You Can Play Project are focused mostly on acceptance of people of all sexual orientations, the efforts of other groups to make the game’s appeal known to inner city kids don’t get quite the amount of press that they deserve. It is the hope of the author that these groups, like the great organization Hockey is for Everyone (which O’Ree has done a lot of work in supporting), will get more press coverage out of all of this. 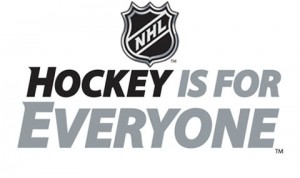 Another item that has to be stressed is that these things are no joking matter. Quite a few of the people who were exposed for their horrific remarks insisted that they were “just kidding”, and that people needed to “lighten up.” The reality of matters is that anyone can try to explain away anything they say as “oh, I was just kidding,” but the intention is just as vile as if you meant every word that you said. Making yourself out to be some backwards-thinking doofus may seem funny in your mind, but it makes you look like a complete fool to anyone with a lick of common sense, and that seems to be lost on those who made these comments.

Finally, the whole incident underscores once again the worst thing about services like Twitter. Yes, it is an amazing feat of technology to allow fans and media to communicate with the world instantaneously, but the ability to hide behind a wall of anonymity gives fans the courage to say hideous things that they would undoubtedly avoid in casual conversation.

The whole Ward incident reflects something that occurred in January during the NFL playoffs, when San Francisco 49ers wide receiver Kyle Williams booted not one, but two punts during the game, and it ended up costing his team a chance to advance to the Super Bowl. No sooner had the second kick passed through his hands than a wave of Twitter posts wishing death on him and his family hit the internet.

While the idiots responsible for the posts were summarily criticized by more reasonable fans, the incident brings up a lot of the same points that this one does: being able to express your opinions to a computer screen as opposed to someone’s face makes you feel a lot tougher than you ought to, and the repercussions aren’t as swift, so people’s filters get turned down quite a bit. It is both a gift and a curse of this technology, and you saw the horrible results of this tonight.

Ultimately, though, the whole exercise is a reminder of just how far we have to go as a society to make not only the sport of hockey, but life in general, more race-neutral. People can crow until the cows come home about how injecting race into everything is bad, but when you have situations like this, it becomes painfully clear that we STILL aren’t into a color blind age. We may have a black President, and we may have a lot of prominent African-Americans doing things they could have never imagined, but we still have ignorant schmucks in the world, and they feel as though they can hide behind the cloaks of secrecy and be protected from ridicule.

What needs to happen is that these people need to be dragged into the public square of opinion and showered with jeers and derision. Twitter users like EthandaGXD and Aaron_Revers may think they are being utterly hysterical with their commentary, but perhaps if we as a dedicated group of hockey lovers show them that their words reverberate far beyond their group of friends, then maybe we can change some minds on the subject of race and hockey.

Obviously, this seems like a pie in the sky mentality, and the likelihood is that these folks will continue to make jokes about Klan hoods and hanging people until the end of time. It’s an unfortunate fact that people take their right to freedom of speech and pollute it with this kind of filth, but it would still be nice to see people at least try to reason with them before dismissing them as loons and nutcases.

We as a hockey loving community need to make sure that a few bad apples don’t spoil the perception of the bunch, and make sure that people know that a vast majority of us are down with anyone playing hockey, regardless of skin color, gender, or orientation. This is important, because this game really is great, and it would be a shame if some kid was dissuaded from playing because of these types of perceptions.

That is the big danger in all of this, but as a community, we can prevent that from happening. The reality is that no community is more tightly knit and capable of doing so than the hockey world, so it’s up to us to be proactive. The future of the game we love depends on it.