When the Boston Bruins fell to the Tampa Bay Lightning in the postseason, a glaring issue on their roster was unveiled for the entire hockey world to see. While their roster was solid from top to bottom, the team’s lack of a defensively responsible left-shot defender outside of Zdeno Chara made for some ugly results in the end.

It’s for that reason that the Bruins are likely going to explore their options this offseason in an attempt to fix that need. The issue, however, is that top-four defenders who are accountable and responsible in their own zone don’t simply just grow on trees. If and when they become available, the cost is usually very high. 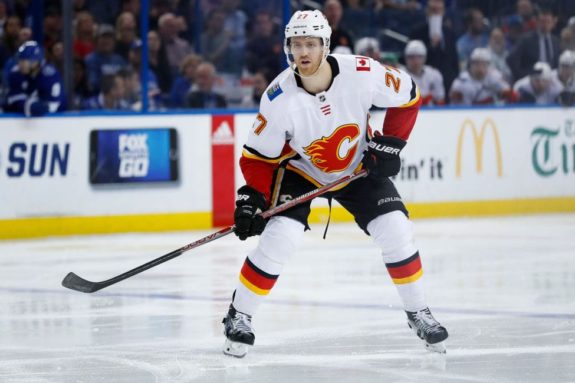 There were clear differences to consider in the situations as Hamonic was 26 years old at the time of the deal and Hamilton was only 22, but the fact of the matter remains – the cost to acquire a top-four defender isn’t cheap.

If the Bruins do decide that they want to work out a deal to find someone to fill in on their second-pairing, however, an option may have opened up with the Carolina Hurricanes reportedly open to shopping all of their players outside of Sebastian Aho.

Noah Hanifin an Option for the Bruins

Going back to the 2015 NHL Draft, there were a lot of murmurs that the Bruins were collecting draft picks (three in each of the first two rounds) to work out a package to move up and draft Boston-native Noah Hanifin. Ultimately a deal never surfaced and then-newly appointed general manager Don Sweeney used all six picks, much to the chagrin of many in Boston (but that’s a different story altogether).

With the Hurricanes now looking to revamp their roster and hear offers on their players,  however, it opens the door for the Bruins to potentially explore a trade for Hanifin to finally get him in the black and gold Spoked B. 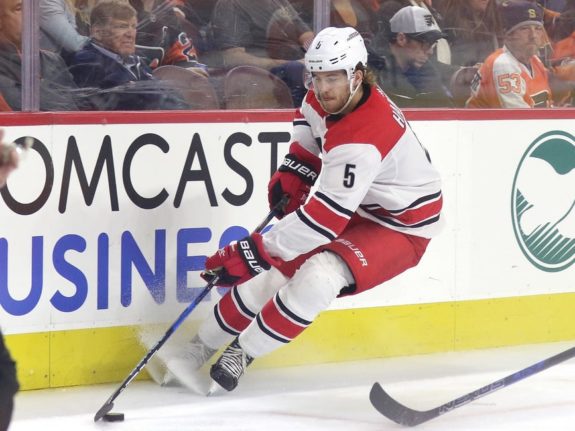 At 21 years old, Hanifin has already played in the league for three seasons. He’s remained healthy throughout his career thus far as well, playing in a total of 239 of a possible 246 games and never playing in fewer than 79 in a season. The 6-foot-3, 206-pound defender has also improved his point totals every season that he’s been in the league as well with four goals and 22 points in 79 games in his rookie season, four goals and 29 points in his sophomore season and 10 goals and 32 points in 79 games in his most recent season.

If the Bruins want to find a long-term answer at left-hand defense who already has NHL experience and who they potentially had an eye on in the past, Hanifin could be that answer. The issue, however, stems from the fact that he isn’t isn’t necessarily a huge upgrade defensively for the Bruins in the present.

If the Bruins can get over the fact that Hanifin will likely cost them an arm and a leg in any potential trade talks, they’ll have to also understand that he’s a defender who is still rough around the edges and has work to do to improve on the defensive side of the game. While he was expected to be a well-polished defender right away, he’s been prone to making glaring mistakes defensively at the NHL level and that is something he’ll need to hone in on if he wants to achieve his potential. 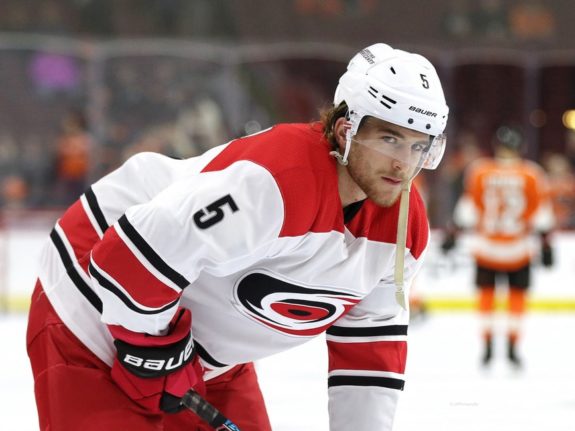 At 21 years old, though, there’s no reason to believe that Hanifin can’t develop into the defender that he was expected to be. In all fairness as well, he wasn’t expected to be a double-digit scorer at the NHL level when he was drafted either so he’s proven that he can adjust and learn. It will be imperative that the Bruins and the fans in Boston are patient with Hanifin, however, as he works through his gripes.

The Bruins already have a solid defender who plays well for various stretches of time before getting unlucky or making a costly mistake in Brandon Carlo. The main difference between him and Hanifin, however, is that Hanifin has proven to be capable of producing offensively as well and that can help a player recover from those mistakes.

Factors to Consider for Hanifin

While Hanifin’s shortcomings shouldn’t be ignored, they can also be explained to a certain extent. While he’s made mistakes throughout his time in Carolina, anybody who has watched the Hurricanes play in recent years has seen a lot of dysfunction across their entire lineup barring perhaps the Jordan Staal line. Any mistake that Hanifin has made could potentially have been avoided with consistently competent play around him. 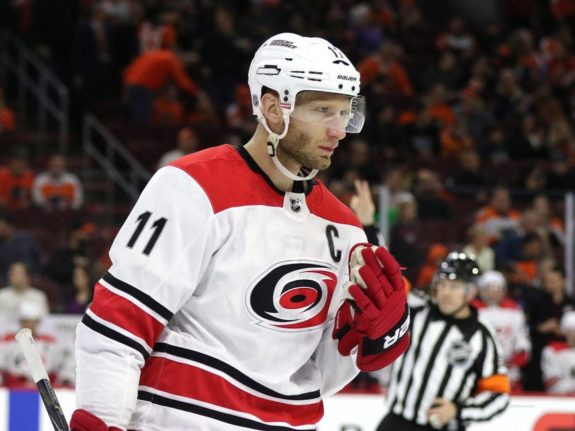 For some reason, people still like to look at plus/minus as a statistic that holds any merit on a player’s ability. In his first three seasons in the NHL, Hanifin has recorded a minus-14, minus-19 and minus-20 respectively.

Do those numbers matter in the slightest? To put it simply, no. 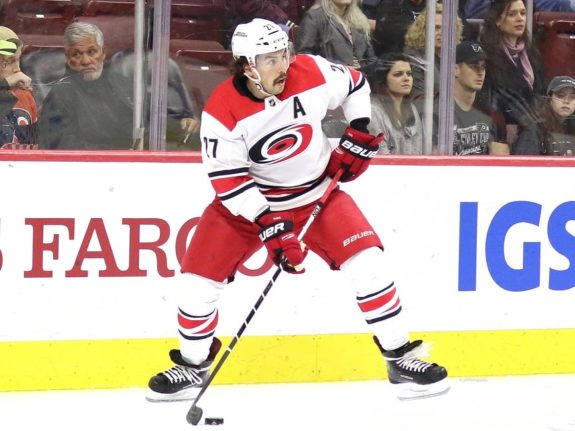 If an entire team is struggling (the Hurricanes haven’t qualified for the postseason in nearly a decade), then it seems unlikely that one 21-year old defender will be the difference maker on the team. If he can play for a team that has proven that they’re among the best in the NHL, however, things could be easier for Hanifin in the long-run.

To be clear, Hanifin’s job won’t be easy in Boston as he’d be tasked with playing some of the toughest minutes on defense. His job would be easier than it is in Carolina, though, as he’d be playing with a team that has proven they can help their defense and alleviate some of the pressure. Something to note is that Hanifin has never started below 55% of his shifts outside of the offensive zone with the last two seasons both eclipsing the 60% mark.

Still, the Bruins may not need to acquire Hanifin at all.

Do the Bruins Need to Acquire a Defender?

While the immediate need for a minute-eating left-shot defender is apparent in Boston, the team can’t think too heavily in the short-term.

The Bruins will clearly need to Chara at some point and that time could come after the 2018-19 season. If this is the case, having Hanifin on the roster would be beneficial as the team wouldn’t be forced to throw too many rookies to the wolves in a high-impact role. Still, it’s hard to look at the Bruins pipeline and not seen the answers the team is looking for already in the system. 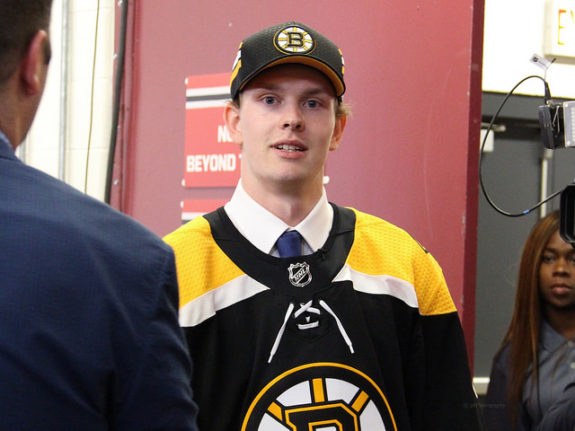 The most obvious answer to the Bruins need is Urho Vaakanainen. Despite never playing a game in North America at the professional level, Vaakanainen has proven in the Finnish Elite League that he can eat minutes at an elite level. His skating is his strongest asset and his decision making isn’t far behind.

Playing against talent far more experienced than himself, the 19-year-old Vaakanainen found himself playing upwards of 22 minutes a night in the regular season and even found himself eclipsing 30 minutes of average time on ice in the postseason.

While he may not be ready to make the jump to the NHL just yet, he could be closer than anyone expects. It would be unreasonable to expect him to immediately step into a top-four role for the Bruins in 2018-19, but it also isn’t out of the question, either.

Lauzon and Zboril Are Also Options

Outside of Vaakanainen, the Bruins also have Jeremy Lauzon and Jakub Zboril (both drafted in 2015 by the Bruins) who could be long-term answers for the Bruins on the left side. 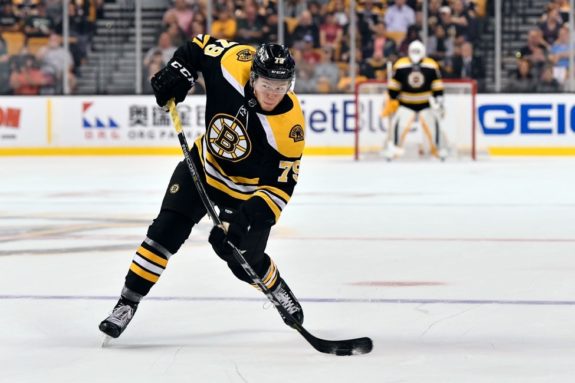 Lauzon is a two-way defender who isn’t afraid to get physical and is capable of producing offensively. At 6 foot 3 and 202 pounds, he has the ideal size for a puck-moving defender as well. Unfortunately, injuries have hurt him over the last two seasons (in the QMJHL and again in the AHL) and his offensive totals took a hit in his first professional season in Providence.

If he can re-find his offensive game in Providence, his ceiling at the NHL level is high.

As for Zboril, the Bruins have a solid two-way defender who is more defensively responsible than Lauzon but not as offensively gifted. The biggest thing for him is conditioning and consistency. If he can reach his potential, he’ll be a bonafide top-four defender. That may take some time, though, and it’s part of the reason the Bruins might consider swinging a trade to acquire Hanifin in the interim and for the long-term.

Even if the team isn’t entirely sold on Hanifin being better than internal options that will be ready down the line, they still have to at the very least do their due diligence and make the call.

As is the case with all trades, though, the cost could be a deal-breaker.

What Would Hanifin Cost?

As mentioned, the going rate for a young top-four defender isn’t cheap. If the Bruins are going to make a trade to acquire a player like Hanifin, it won’t come for pennies on the dollar. If the Hurricanes are looking for a forward on an entry-level contract (and then some) in return for Hanifin, it would make sense to start the conversation at Danton Heinen and expand from there.

While Heinen was excellent for the Bruins for most of his rookie season, he tapered off a bit at the end. He wasn’t necessarily a bad player for the team but he just wasn’t having any puck-luck and he appeared to lose some confidence in doing things that worked for him earlier in the season. It was a classic case of hitting the rookie wall and it’s not something he should be judged on too harshly.

Scoring 16 goals and 47 points in 77 games in his first season in the league, his age-22 season, Heinen proved that he could play up and down the lineup and in a variety of roles. While the Bruins would love to keep him, he’d be the bare minimum starting point for any such trade. Though Anders Bjork may also have a high ceiling, his inability to have as successful a rookie year as Heinen and Jake DeBrusk could limit his value on the trade market. As such, Heinen would be the go-to outside of DeBrusk who undoubtedly isn’t going anywhere.

On top of Heinen, the Hurricanes would also likely want at least one high-end prospect and a draft pick of sorts in the deal as well. Regardless of what configuration of players, picks and prospects the Hurricanes want, however, it’s clear that the Bruins will really need to want Hanifin if they want him on their roster. They didn’t want him badly enough that they felt he was worth trading away an overabundance of draft picks for in 2015 and it would be interesting to see if they deem him worth it now.

Another interesting tidbit on Hanifin is the fact that he’s a restricted free agent and will be looking for a contract from the Hurricanes (or any team he may get traded to in the offseason). Because his ceiling is so high and he hasn’t yet reached it, it wouldn’t be surprising to see him signing a bridge deal worth anywhere between $2 million and $4 million per season before cashing in on a significant contract.

The Bruins already have a plethora of contracts coming up in the next few seasons in Carlo, Bjork, DeBrusk, Heinen, Ryan Donato, Matt Grzelcyk, Charlie McAvoy, Jakob Forsbacka Karlsson and Peter Cehlarik, among others. Adding Hanifin to the mix and knowing he’d need to be signed and likely extended again down the line could be tricky. Still, it could also be worth it with the Bruins window to win currently wide open.