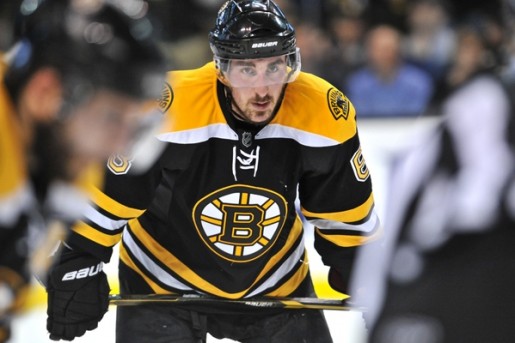 The Boston Bruins’ Brad Marchand was given a five-minute major and ejected from Saturday afternoon’s game versus Vancouver for a low hit on the Canucks’ Sami Salo. The major penalty turned out to be significant as the Canucks scored twice, including the eventual game-winner off the stick of the young Cody Hodgson in Vancouver’s 4-3 win in Boston.

Of course, much of the talk after the game centered around two possible (and significant) suspensions for the defending champs. The first, a leaving-the-bench incident (resulting in an ejection) perpetrated by Milan Lucic early in the first period won’t result in additional discipline from the League. Lucic was given a game misconduct which was rescinded by the League after analysis. If upheld, the misconduct would’ve resulted in an automatic ten-game ban.

Marchand won’t be so lucky, in all likelihood. His hit on Salo has drawn the ire of many and he’s earned a phone conversation with NHL Disciplinarian, Brendan Shanahan as a result. Vancouver GM Mike Gillis called the incident “…a dirty hit by a dirty player.”

Compounding the issue is Salo’s apparent injury status. The big Canuck defender apparently won’t be in the lineup when the ‘Nucks take on the Panthers in Sunrise, Florida tomorrow.

Unfortunately, lost in the self-righteous uproar of Bruins-haters is the simple fact that this was not clipping. The NHL rules clipping to be:

“44.1 Clipping – Clipping is the act of throwing the body, from any direction, across or below the knees of an opponent.”

As is clearly shown in the slow-motion replay, Marchand hits Salo well above his knees, mid-thigh sending the Canuck defenseman tumbling. Clipping was absolutely the wrong call. If that was “knee-area” – the “knee area” apparently extends farther than one would imagine.

Still, some are arguing for interference or tripping. Well, Marchand was the closest man to the puck and his stick was mere inches from possession before the hit was delivered. Hard to argue calling interference on someone who has (or very nearly has) possession– and even harder to argue for call for interference when the ‘interfered-with’ player is attempting to check the perpetrator.

There’s certainly an argument to be made that this was dirty, regardless of rule violation. I can understand that. Personally, I don’t see this as a ‘clean’ collision. But without any specific rule violation is it really deserving of supplemental discipline? Perhaps.

Marchand himself acquiesced to the decision the referees made to eject him: “… It’s a five-minute major. It was the right call – he was hurt and I was ejected from the game.”

“… They have to protect themselves. Whether it’s the right way or the wrong way, … I’d rather have a guy take a two-minute penalty than turn his back to the play, stand up straight, and then get his face knocked into the glass and be out for maybe the rest of the year with a concussion, or maybe end his career like [Marc] Savard … In my opinion, if guys start protecting themselves the way Marchand did, maybe guys will stop taking runs at other guys…”

Standing up to take the hit might have been the more ‘noble’ decision, but Julien has a point: Would you rather your player gets clobbered by an opponent looking to make a big impact – or duck the hit and be branded ‘dirty’ by the ultimate arbiters of NHL righteousness (Gillis).

Looking at some ‘legal’ hip-checks, it’s hard to draw a definitive line between legal and illegal. Just take a peek at Keith Ballard’s hit on Jamie McGinn in the 2011 Western Conference Finals Game 4:

Now as I’m sure everyone knows, Vancouver is a beacon of just and fair play, but other than the angle (Marchand’s hit was more midsection to Ballard’s hip) and possession differences – is one that much dirtier than the next? Ballard’s knees actually appear far more bent leading up to the impact and he seems to make closer contact with that ill-defined ‘knee region’.

Marchand is a ‘repeat offender’ by NHL definition. His (definitively) illegal elbow to the head of Columbus’ R.J. Umberger cost him two games last March. He could get up to five games as a result of this collision. Shanahan’s in a tough place. Anything other than throwing the book at Marchand will cause significant uproar as indignant tinfoil-hat-wearers around the League presume a pro-Bruins bias.

Marchand’s collision with Salo wasn’t clean. It was a bad decision by the Bruins’ Honey Badger and will probably cost him a few games (expect three or four) and make him lighter in the wallet. It will continue to ‘endear’ him to opponents and further his reputation as one of the ‘cheaper’ players in the NHL.

Still, twenty-nine out of thirty markets hated the guy before yesterday’s “clipping” incident. I doubt that will change much as a result.

53 thoughts on “Brad Marchand’s Hit on Sami Salo: Not Clean, Not Clipping”