One team rode an intense wave of success right into the post season, going 10-2-2 over their final 14 games, including 4 straight wins to end the regular season.

The other lost 5 in a row before defeating the New York Islanders on the 2nd to last day of the season.

Deciding which team got to this series by the above description and their current playoff position is not as easy as you may think.

Philadelphia, who had lead the league in points for a considerable duration during the middle part of the season, has struggled mightily as of late. One could argue it is a result of their success and a lack of threats from the rest of the Eastern Conference or even their Division on a smaller scale. But that attitude is why the Flyers currently sit as the #2 seed and not #1. During their stumble into the post-season, the Flyers were not only caught and passed by the Washington Capitals, but were nearly caught by their Atlantic Divisional rivals, Pittsburgh Penguins.

Buffalo, on the other hand, has scored no fewer than 4 goals per game throughout April. Over their five games this month, the Sabres defeated two of the three playoff-seeded teams they faced, losing only to Washington in a hard-fought matchup that was won on an Alex Ovechkin deflection off two Sabres defenders and behind goaltender Jhonas Enroth.

The Sabres finished the season on a 19-4-3 run since March 1st, including the previously mentioned two victories over their current opponents. Riding momentum will be huge boost for the Sabres heading into Philadelphia, where the Flyers have struggled recently. 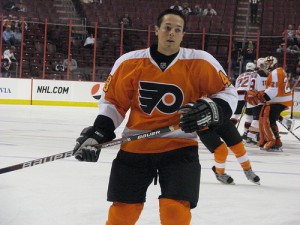 Offense: The Sabres offense has been scoring goals at a solid clip as of late, the Flyers has been inconsistent. Philadelphia has immense potential, with 6 players who scored 20 or more goals during the regular season. Daniel Briere and Jeff Carter each eclipsed the 30 goal mark as well as the 60 point plateau. Buffalo will counter with a pair of 30-plus goal scorers of their own in Thomas Vanek and Drew Stafford, but anyone and seemingly everyone on the team can contribute a goal or two.

Edge: EVEN The Flyers scored more goals during the regular season but the recent Buffalo success levels the two sides.

Defense: Yes, the Sabres have defending rookie of the year Tyler Myers and they are getting their act together, the Flyers are a much stronger team defensively, even without Chris Pronger. They’re more experienced and they’re a lot grittier. The Sabres’ defenders have offense on their mind as a product of their system, and could be a problem should the Philadelphia offense get rolling. 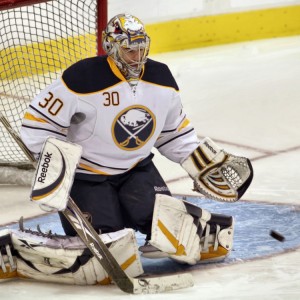 Goaltending: Sergei Bobrovsky has been a pleasant surprise for the Flyers who had many questions about their goaltending situation entering the season. Ryan Miller, however, is beyond experienced and reliable. He’s been to the conference finals twice in his young career, been to the gold medal game at the Olympics last year in Vancouver, and is coming off an upper-body injury well rested. Should this fall to a battle of the backups, Sabres would still be okay as Jhonas Enroth has stepped in quite well for the injured Miller.

Game 1: Buffalo – Sabres roll mixed with the Flyers recent struggles will give Buffalo the edge, even with it being in a very hostile Wells Fargo Center.

Game 2: Philadelphia – The Flyers will rebound handedly and level the series at 1.

Game 3: Buffalo – Buffalo’s fans will come out in droves to HSBC Arena, Sabres will feed off that and regain the lead of the series.

Game 4: Buffalo – Philadelphia will try to return stealing home ice from the Sabres, but it will not happen. This is a game that will probably go to overtime, HDTV (Thomas Vanek) will net the game winner putting the Flyers on the verge of elimination.

Game 5: Philadelphia – the defending Eastern Conference champions will send the series back to the Queen City in dominating fashion.

Game 6: Buffalo – The Sabres shake off a bad game 5 loss and redeem themselves with a pair of early goals in the first. Ryan Miller will pitch the shutout, giving Buffalo the series victory

2 thoughts on “Buffalo Sabres vs Philadelphia Flyers – Round 1 Prediction”