The Franchise Four. The Mount Rushmore. Four players who tell the story of an organization. In this series I’ll be taking a look at the history of all 30 NHL squads. For criteria, I’m choosing one forward, defenceman, goaltender and a wild card from any position.

Moving south from Hartford in 1997, the Carolina Hurricanes have a carved out a nice 17-year history in the Tar Heel State. During the aforementioned time span, the Hurricanes won a Stanley Cup in 2005-06 and have reached the Stanley Cup Final twice.

So, which players make the “Franchise Four,” with the Hurricanes?

From Hartford to Greensboro to Raleigh, Wesley was a fixture on the Hurricanes blue line and pretty much saw it all. Wesley was a member of the Hurricanes Stanley Cup championship squad in 2005-06. Wesley played for a decade with Carolina and tops all defensemen with 120 helpers and ranks fifth in club history with 442 penalty minutes. Wesley was a gamer and a grinder for the Hurricanes and provided an important veteran presence. 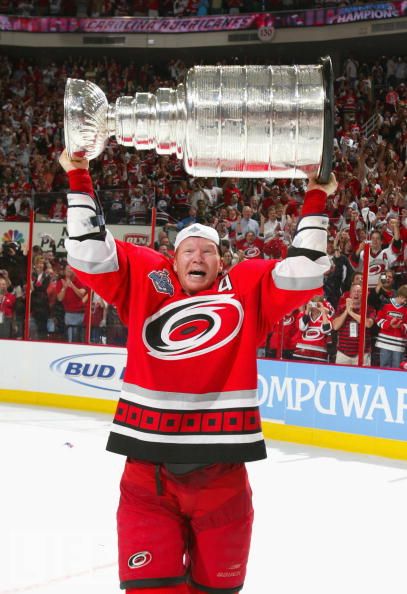 Ward leads Carolina goaltenders in wins (246), saves (13,416) and shutouts (22). When Ward is healthy and on, he’s on. During his rookie campaign, Ward took the reins and helped guide the Hurricanes to their first Stanley Cup title in franchise history in 2005-06. Ward played a postseason best 1,320 minutes, recorded two shutouts and won the Conn Smythe Trophy as well.

I was torn with this selection. If one takes Francis’ numbers from his Whalers days, he vaults to the top of this list. While Francis did a lot to lend credibility to hockey on tobacco road, Brind’Amour was also a catalyst and an excellent two-way forward with the Hurricanes. To that end, Brind’Amour earned consecutive Frank J. Selke Trophies in 2005-06 and 2006-07. As a member of the Hurricanes Stanley Cup winning squad in 2005-06, Brind’Amour paced the club with 12 tallies during the postseason, posting four game winners along the way. Brind’Amour also ranks third in club history with 174 markers and second with 199 helpers and 473 points.

When I think of the Hurricanes, I think of the name Staal. Mostly because there’s a lot of them but that’s beside the point. Eric Staal, the No. 2 overall pick during the first round of the heralded 2003 NHL Entry Draft, has been the homegrown face of the franchise, helping lead the Hurricanes to the Stanley Cup in 2005-06. During the Canes title run, Staal paced the club with 19 helpers and 28 points. The championship season was Staal’s finest, as he recorded careers bests for goals (45), assists (55) and points (100). Staal is a four-time All-Star and ranks first in Hurricanes history with 312 tallies, 430 helpers and 742 points.