Cam Ward and Anton Khudobin shared time in net for the ‘Canes last season. They were the only two goalies to play in a regular season game for ‘Canes last year. Cam Ward jumped out in front as the starter, while Anton Khudobin left a lot to the imagination when it came to competing as the starter. Cam Ward and Anton Khudobin combined take up massive salary which is hurting managements ability to spend. The ‘Canes are paying too much for the services of two goalies. They will need to decide this off-season how they want to move forward at the goalie position.

Last season Ward accumulated most of the ‘Canes sparse wins. Unless there is a drastic drop in his play Cam Ward will be the opening night starter for the ‘Canes next season. Cam Ward played well enough last year to erase some of the doubts that he completely lost his game. The problem is he will make over six million dollars in salary next season. That is a hefty amount of cash that stings the ‘Canes wallet while they are trying to put a successful hockey team on the ice. Ward played good hockey last year, but he is making the money of an elite level goalie. Ward was strong in net for the ‘Canes, but he was far from an elite level last season.

Anton Khudobin needed to take charge and steal the starting job from Cam Ward last season. If Khudobin can shine next season, the ‘Canes will have some flexibility when it comes to shedding the large contract of Cam Ward. Khudobin didn’t receive much support from the team in front of him this year, but he also didn’t do anything to show that he could fill the role of Ward. For Khudobin to solidify his future with the ‘Canes he needs to turn it around this summer and prove he can usurp the role of the teams leading goaltender. If he wants to do that he will need to put up better numbers than his .900 save percentage and his 2.72 GAA from the past season. Khudobin will make around $2.5 million next season, and will need to bounce back performance to prove his worth. 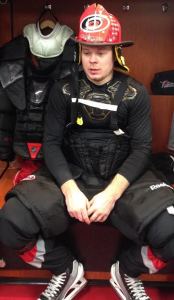 If the ‘Canes decide to not move forward with either Ward or Khudobin management will need to look towards free agency for the immediate future. The pickings are slim for the ‘Canes this off-season. Antti Niemi is the best goalie in the free agent market. He might come at a cheaper price then Cam Ward, but the stats and age (both are 31) of both goalies basically match. Niemi had a .914 save percentage and 2.59 GAA compared to Ward’s .910 save percentage, and 2.40 GAA. Bringing Niemi in will basically be giving them the same goaltender as Ward.

Niemi made $4 million last season, and the only way they will spend money on a goalie is if they somehow shed Ward’s salary. The “building” ‘Canes might have a reason to wait on spending money on a goalie. Next season is the last on Ward’s contract, and unless something drastically changes the ‘Canes aren’t going to be competing for a Stanley Cup next season. They also have a young prospect that has to the talent to be the future goalie of the Carolina Hurricanes.

Alex Nedeljkovik is more than just a really hard last name to spell and pronounce. He was the ‘Canes second round draft pick in 2014, and has some high accolades to go with it. He received the OHL Goalie of the Year award in 2013-2014 and scouting says that he has a bright future in the NHL. His game mixes athleticism with strong composure and a calm demeanor in net. The young goaltender from Ohio is still playing in the OHL, and will take more time to develop. Nedeljkovik is the starting goaltender of the future, but the ‘Canes need to take their time building his confidence and grooming him as an NHL starter. Before the 2014 NHL Draft he was even compared to Cam Ward and Ryan Miller.

Much of the same

Alex Nedeljkovic needs to put some more time under his belt, but he is the future goalie for the Hurricanes. It will be a few more seasons before he can play at the NHL level. If you look at the ‘Canes now it will be a few years before they are ready to compete at a high level in the NHL as a team. It is not the time for the ‘Canes to rush a prospect into the NHL.

That is not what fans want to here now, but its the truth. The ‘Canes are building up, and they have a future starting goalie in Nedeljkovic. For now the ‘Canes should bite the bullet on the large amount of money they are eating with two goalies. Ward is on the last season of his contract, and the ‘Canes have an exciting goalie prospect they need to grow. Earlier this off-season Cam Ward received my vote as the teams Most Valuable Player. I think Ward has some game still left in the tank for next season. Until Nedeljkovic is ready to play at the NHL level, or until a financially better option appears management will just have to make it work with the current goalie situation.