In early May, the Dallas Stars introduced its eighth head coach in the team’s 25 year history. Jim Montgomery joins the Stars after successful stints in the USHL and NCAA, with the hope that the success carries over to the NHL level. Hiring an unproven lower-level coach was a risky move by management, but it’s one that could play out very well in Dallas.

The Stars are banking on their new head coach’s youthful exuberance and tenacity, departing from the older – let’s say more established – coaching styles of its most recent coaching selections, i.e., the 66-year-old Ken Hitchcock, who remains with the club in an advising role, or Lindy Ruff at 58 years young, two grizzled vets who spent 21 years and 19 years, respectively, behind an NHL bench.

At 48 years of age, Jim Montgomery isn’t even the youngest coach in the team’s history. The Stars have tried the “youth movement” before. In 2011, Dallas promoted its AHL coach Glen Gulutzan to be the NHL bench boss as a spry 39-year-old. After two seasons, a 64-57-9 record, and zero playoff appearances, the Stars relieved him of his duties.

There were certainly more established free agent coaches available for the Stars this offseason. Former Carolina Hurricanes head coach Bill Peters was in the conversation to take over Hitchcock’s duties, as was New York Rangers’ Alain Vigneault, who spurned the Stars five years ago when the team was looking for Gulutzan’s replacement. Still, the Stars went for the hazardous hire, taking a risk on its third head coach in as many years.

“Monty,” as he prefers to be called, was far from the safe bet for the Stars, but he is the right choice.

Like most NHL head coaches, Montgomery played the game before becoming a coach. He’s actually somewhat of a legend at his alma mater, the University of Maine.

Monty finished his four-year career at Maine as the school’s all-time leading scorer, finishing with 301 points (103 goals, 198 assists). He captained the 1993 team to an incredible 42-1-2 record en route to capturing the university’s first National Championship and was named a finalist for the Hobey Baker Award at the conclusion of the season. He is also one of only three players to have his number (No. 19) retired by the school, joining the company of NHL-legend Paul Kariya and former Stars forward Scott Pellerin.

Montgomery joined the St. Louis Blues out of college and had a decent rookie season, notching 20 points (six goals, 14 assists) in 67 games. Unfortunately for Monty, that was about as good as it got. The following season he joined the Montreal Canadiens but only appeared in five games.

He then moved on to the Philadelphia Flyers and played 13 contests over parts of two seasons with the Broad Street Bullies. There in Philly, he made his biggest mark in the NHL. Montgomery is credited for giving the line of Eric Lindros, John LeClair, and Mikael Renberg the nickname “Legion of Doom.”

After his stay in Philadelphia, Montgomery moved to Germany for a season before returning to North America as an AHL forward for three years. He returned to the NHL with the San Jose Sharks during the 2000-01 campaign and appeared in 28 games before joining the Dallas Stars, appearing in nine total games over a two season span. He would technically retire a Dallas Star following the 2002-03 season. Monty finished his NHL career with 122 games under his belt and a respectable 34 points (nine goals, 25 assists).

Montgomery was named assistant coach for the Notre Dame Fighting Irish for the 2005-06 season. It would be his only campaign with the club, as the rookie coach was named an assistant for the Rensselaer Polytechnic Institute Engineers, a small Division I school in the rural, blue-collar town of Troy, New York.

There, Monty served for four years under head coach Seth Appert, who was recently named head coach of the U.S. National Team Development Program. Montgomery’s four-year stint with the Engineers was largely unsuccessful, however. As assistant, the club amassed a 49-85-18 record and only had one winning season during that span, the 2009-10 campaign, his final season with the team.

Despite the poor record behind the bench, Monty landed his first head coaching gig in 2010. He was named the bench boss for the USHL expansion club, the Dubuque Fighting Saints, in addition to serving as the team’s general manager. This is really where his career began to take off. In his first season as a head coach, Montgomery led the team to a 37-14-9 record and captured the Clark Cup as league champions in the team’s inaugural season. Monty also took home his own personal award, earning the General Manager of the Year Award. That season, he coached a rookie left wing by the name of Johnny Gaudreau, who would capture the USHL Rookie of the Year honors before being drafted by the Calgary Flames in the 2011 NHL Draft.

“He really, really helped me out because he’s a smaller guy, too. He’s a great guy,” Gaudreau said of his former Fighting Saints coach. “He taught me about things you have to do in the game as a smaller player, and really helped me to get ready for the NCAA and then eventually to come on to the NHL. I think he was one of the coaches who helped me out the most.”

In 2011-12, Montgomery guided the team to a 36-20-4 marker. The following season, the Fighting Saints improved to a 45-11-8 record, winning the team’s first Anderson Cup as regular season champions before capturing yet another Clark Cup as league champs. The team’s success also earned Monty another GM of the Year award. After amassing an impressive 118-45-21 record (.641) and two league championship titles in three years, Montgomery captured the attention of the University of Denver.

In 2013, Monty was named head coach of the DU Pioneers. In his first campaign behind the bench in Denver, Montgomery led the Pios to an NCAA tournament berth, but the club couldn’t make it past the first round. Monty showed steady improvement as he became more tenured in Denver. His first season, his team went 20-16-6. The following season, in 2014-15, the team went 24-14-2 and earned another tourney berth. By 2015-16, he and his Pioneers squad were clicking. A 25-10-6 record earned the team yet another tournament berth. The club made it all the way to the Frozen Four but fell to the eventual national champions, the University of North Dakota.

The 2016-17 campaign was by far the best in Denver. A 33-7-4 season earned the team fourth-straight NCAA tournament berth under Monty’s guide. This time around, the Pioneers would reach the pinnacle of the NCAA hockey world, earning the school’s eighth national championship title. The following season, Monty’s Pios would fall short of a repeat, bowing out of the tournament during the Elite Eight. In total, Montgomery owned an impressive 125–57–26 (.601) record during his five-year tenure in Denver.

Now a rising star in hockey’s coaching circle, it was time for Monty to graduate college and take his talents to the big leagues.

What to Expect from the Stars’ New Coach

Montgomery joins the Stars as the third head coach in the last three years to go directly from the college circuit to the NHL, perhaps indicating a new trend in today’s league. He joins the Philadelphia Flyers’ Dave Hakstol, who is entering his fourth season in Philly after an 11-year tenure at the University of North Dakota, and the newly-hired New York Rangers’ bench boss David Quinn of Boston University. In total, only five coaches have made the jump directly from college to the NHL.

For Hakstol, it’s worked out for the most part. He’s compiled a 122-86-38 record and his Flyers team has made the playoffs two out of three seasons that he’s manned Philly’s ship. For Monty and the Stars (and Quinn, I suppose), whether the NCAA success translates to the big leagues remains to be seen.

Though if I were a betting man, I’d say this hiring gamble by Jim Nill and the Stars will work out in the end. He’s been saying all of the right things. So far so good. 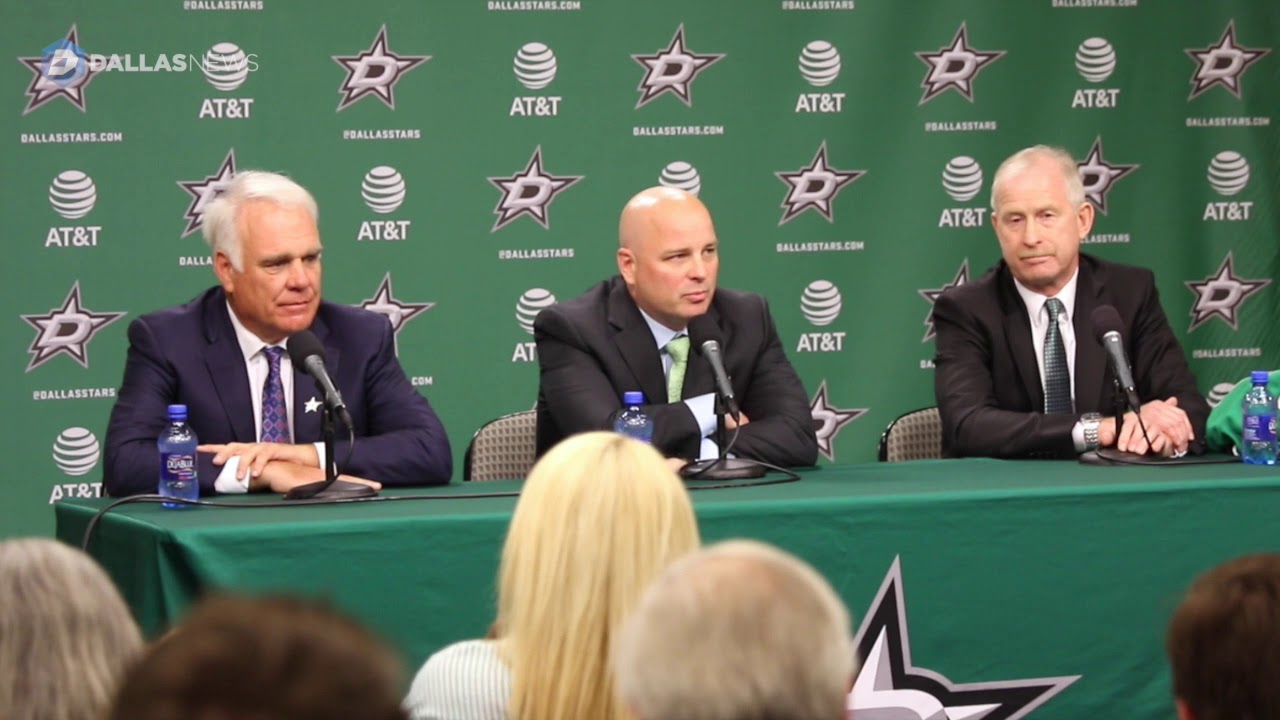 “When I look at this lineup, I really get excited,” Montgomery said. “It has everything you want. It has star power. … You have depth, you have size, you have skill, you have speed at every position.”

This is true, Dallas possesses all of the aforementioned attributes. So far the Stars just haven’t had the right coach to put it all together. Hitchcock was too defense-oriented, which forced the speedy Stars to kind of lay back on their heels in games last season. Ruff’s style fit Dallas’ mold a little better as he preached more of a speed game:

“The type of style that we’ve played has always been, it’s been a real hard, up-tempo game. There’s a lot of energy inside of it.”

Ruff allowed the Stars to play with speed and energy and it was good, it worked for a while. When Ruff came aboard, his first season as the Stars’ bench boss the team ended its six-year playoff drought. A couple seasons after his hiring, Ruff and the Stars captured the Central Division title with an impressive 50-23-9 record. His style worked, it was fast, offensive, but still defensively responsible. But it was inconsistent. In his four years at the helm, Ruff’s Stars made the playoffs every other season and couldn’t string together two successful seasons in a row. In total, the Stars went 165-122-41 under Ruff’s guide.

It appears Montgomery’s style will be fairly similar to Ruff’s. In his introductory press conference, Monty said this of what to expect from the Stars:

On the ice, for the Dallas Stars fan, if you can think of an adjective of what we’re going to look like, it’s going to be ‘relentless.’ We’re going to be a puck-possession team and we’re going to try to make plays everywhere on the ice. And when we don’t have the puck we’re going to pressure you so we can get it back and make more plays.

Dallas tried the defense-first mentality with the grizzled Ken Hitchcock. The Stars’ current roster is more built for that attack-first, speedy style of play that showed some success under Ruff. It’s also the style Stars fans can expect from its newest head coach. Monty is going to let Dallas do its thing.

“I think you look at the championship teams that have won in the NHL,” Montgomery said. “The teams play a certain way. There’s structure to their game, but there’s creativity and flair to it, too.

It seems like the perfect fit for the assets the Stars currently possess. Monty will bring the youthful exuberance, the swagger, and perhaps a notch of naiveté that just might be what Dallas needs. Out with the old and in the with the new.

Google the word “monty” and a dictionary definition will appear at the top of your screen. It defines the word as “the full amount expected, desired, or possible.” Here’s to hoping that Monty can get the full monty out of the Stars.