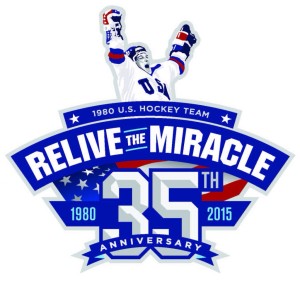 Sunday, February 22, will be 35 years to the day when a group of unknown college kids beat the dominant Soviets in a win that shocked the world at the semifinals of the 1980 Winter Olympic Games in Lake Placid.

In the years since, the infamous arena has been open for hockey clubs, aspiring Olympians, high school, and college teams to play. To play, and win, where such a historic win took place, is something that cannot be taken away from these kids.

When the teams and visitors alike come to the arena they get an up close view of Locker Room 5, the room where Coach Herb Brooks gave his memorable speech. A speech, now immortalized on the wall, that many young players came to know thanks to the movie, Miracle.

This Saturday, however, fans will get the chance to relive the miracle.

Hockey Day in America is a huge day celebrated by hockey fans and teams all across America. This year though, fans in New York will get an extra special celebration. On the 35th anniversary of the 1980 U.S. Olympic hockey team’s gold medal win, all living members will be in Lake Place, NY.

The celebration will be called Relive the Miracle and is set for Saturday, February 21st, in the same arena where the U.S. beat the Soviet Union 4-3. It was a game that Sports Illustrated proclaimed as, “the greatest sports moment of the 20th century.”

The Herb Brooks Arena will open to fans at 7:30 p.m. on Saturday and will give guests a chance to hear unique perspectives on the event from the members of the team. Video footage from the Olympic Games as well as original photos will also be shown. Attendees who still own 1980 Winter Olympic memorabilia are encouraged to wear them to the event.

“To be able to share our story with fans has always been a pleasure, and given the 35th Anniversary is in 2015, this seems like a great time to reach as many people as possible,” said Dave Christian. “Honestly, sharing the stories never gets old, because it always ends with a smile on someone’s face.”

On Sunday, NBC will host a NHL tripleheader to close of Hockey Weekend Across America. Featured throughout the day and night will be a live studio show from Lake Placid.

Tickets will be $19.80 as another little tribute to the team.

A tribute to Bob Suter, who sadly passed away in September will be a special part of the evening. The father of Ryan Suter, will get his #20 jersey hoisted to the rafters of Herb Brooks Arena. He passed away from a heart attack while coaching young hockey players at the age of 57. Suter is the first player from the 1980 team to pass away.

Last October, Mike Eruzione was interviewed about Suter and the possible reunion by NBC OlympicTalk. He had this to say about what a future reunion would be like:

“It’s going to be interesting and sad to think about the next time we’re together as a team that one of us is not there but not for a family function or a speaking engagement but the fact that he’s no longer with us. There are going to be more of those moments. It makes us realize that maybe, this year, it would be nice if we could get everyone together.”

‘Rizzo’ got his wish. In the same interview he had said the if a reunion did happen he had hoped for either Lake Placid, or Augusta, GA so they could all play golf.

In the 35 years since the Miracle, nineteen of twenty players have survived. It will more than likely be exceptionally tough on all of them to not have Suter there to join in the festivities, but instead be seeing his jersey raised in memoriam.

In 1980 it was known as the Jack Shea Arena, dating back to the 1932 Olympics which were held in the same arena. It was the first indoor arena used for an Olympic event.

Since 1980 the arena has remained unchanged. It still seats 7,700 people and the announcers still sit in section four, eye level to where Jim Craig’s goaltender ability once beat out Vladislav Tretiak.

For the 11,000 fans who crammed into the arena that day, every time they go back they get to relive what they saw, and sit, or stand, exactly where they were when the celebration happened and the immortal words, ‘do you believe in miracles,’ were spoken.

This weekend the greatest miracle hockey fans known will get to be relived with nineteen of the twenty players on the ice, and one there in spirit. It will be a chance to see the team and to pay final respects to the man who played on a broken ankle and refused to give up.

On her previous stint with The Hockey Writers, Casey covered the Tampa Bay Lightning, but she has returned to take on the Carolina Hurricanes. Even though she is Steel City born, a former season ticker member with the Lightning, and lives in Orlando, the Canes have always been her favourite team. She started her hockey career as Keeper of Time for the California University of Pennsylvania Vulcan Hockey Club while going to school for Sport Management. She hopes to one day work with Hockey Ministries International as a team chaplain. You can usually find her tweeting about hockey or posting pictures on Instagram.

1 thought on “Do You Believe in Reliving Miracles? Yes!”