For those who may have doubts about the growth of the women’s game, reassurance can be found with great vibrancy in nontraditional markets. Enthusiasm for women’s hockey is actually quite rich in some of the furthest reaches of the globe. The players themselves in these regions have the utmost appreciation of the few opportunities that come their way. In early December, the IIHF held their qualification tournament for the Women’s World Championship Division II B. This lowest tier of IIHF women’s world competition is actually one of the most enjoyable to behold.

At the Division II B qualification held in Bulgaria from Dec. 4-9, 2017, there were a total of five teams that participated. Those countries were Croatia, Belgium, Hong Kong, Bulgaria, and South Africa. With South Africa is where our story begins.

THW had a chance to chat with an up-and-coming young netminder for the South Africans, Dominique Relleen. Through talking with this young lady we learned more about both she and what hockey in the Republic of South Africa are all about.

Relleen Still in the Early Stages of Her Career

While Dominique Relleen is 18 years of age, she has not played as a goaltender for very long. The native of Johannesburg is still a bit of a rookie herself when it comes to the position.

“I started playing ice hockey in my early teens,” she said. “I only became a goalkeeper two years ago.”

It is not that difficult to understand. South Africa is not typically considered a hockey hotbed. In fact, few would even surmise that the country in the southernmost region of its continent had a national team, let alone a women’s program. Relleen herself recognizes it as a rarity.

“Ice hockey in South Africa isn’t particularly the biggest sport,” she explained. “I was lucky enough to learn about the sport when I was younger and just starting with ice skating. I truly learnt about ice hockey from my ice skating instructors when I took ice skating lessons. Once I had the right movements and knew how to skate properly I got invited to play ice hockey at one of the clubs where the one instructor coached at. I first started as a winger, then got put to defense. But when I tried out for goalkeeper two years ago, I knew the moment I put all the padding on that this was my position in ice hockey.”

Relleen has not looked back and has had some great success in her infancy at the position.

Former Washington Capitals great (and one-time member of the Tampa Bay Lightning) Olaf Kolzig is, to date, the only NHLer to hail from South Africa. Might it be possible that Relleen herself could be the professional pioneer for South African women’s hockey? Just as millions of Canadian and American teenagers do, Relleen has found goaltending inspiration from the NHL.

“I wouldn’t particularly say I have a hero in ice hockey,” she explained. “I’d rather say I have inspirations. For instance Sergei Bobrovsky – I aim to play like him just with my own style, of course. My other inspirations are my coaches, past and present. I know if I didn’t have them pushing me to work harder or work on something I am doing wrong, I wouldn’t be where I am today.”

It’s Relleen’s appreciation that speaks to her strong character and sportsmanship. Hockey is hard to come by in South Africa. She knows that, and does not take her opportunities for granted. In fact, her positive mindset as a netminder is likely her finest characteristic.

“My best attribute is most probably staying positive both on the ice and on the bench,” she told THW. “I learnt that if you become negative as a goalkeeper the rest of the team can also become negative. No matter what happens you cannot change it – you can either embrace it or let it affect you negatively.”

The qualifications in Bulgaria were Relleen’s first opportunity represent her country on the international scene. The 5-foot-4 goalie did not disappoint either. In her very first international game, she whitewashed the host nation Bulgaria 4-0. In earning the shutout, Relleen made 23 saves. That would be her one appearance of South Africa’s four tournament games, but it was a remarkable one that also helped them to a third-place finish.

“Having a shutout in my first international game felt absolutely amazing to be honest,” said Relleen. “But what helped was knowing I had a good team in front of me.”

See what we mean about Relleen’s character? She was also understanding that she, like other players on the roster, was a newcomer to the team at the tournament. For the other three games, Relleen took the backup role to Shaylene Swanepoel. The 27-year-old Swanepoel is the elder stateswoman on South Africa’s roster, and a teammate whom Relleen can learn much from.

“This year the South African ladies team had quite a few new players, including myself,” Relleen stated. “I believe we all want to gain not only experience, but new knowledge and skills that we can continue to work on.”

Having a veteran goaltender like Swanepoel can offer Relleen vital tutelage for her development. Swanepoel has been South Africa’s mainstay in net for a decade.

Dissecting the Goaltender Position With Relleen

In a relatively short period of time, Relleen has developed a feel for the game. Call it muscle memory or a bodily intuition if you will. Whatever it may be, she has been generating it very well and has been learning how to best utilize her body in order to play the position.

“Each goalkeeper is different,” she explained. “We might play the same position and the same game, but we all have our own technique of how we play. No matter what the score is, whether it is against you or the opposing team, continue to work hard because a lot can change in a matter of minutes. If you let a goal in don’t let it get to you. Just repeat to yourself ‘You can stop the next one. You will stop the next one!’.” 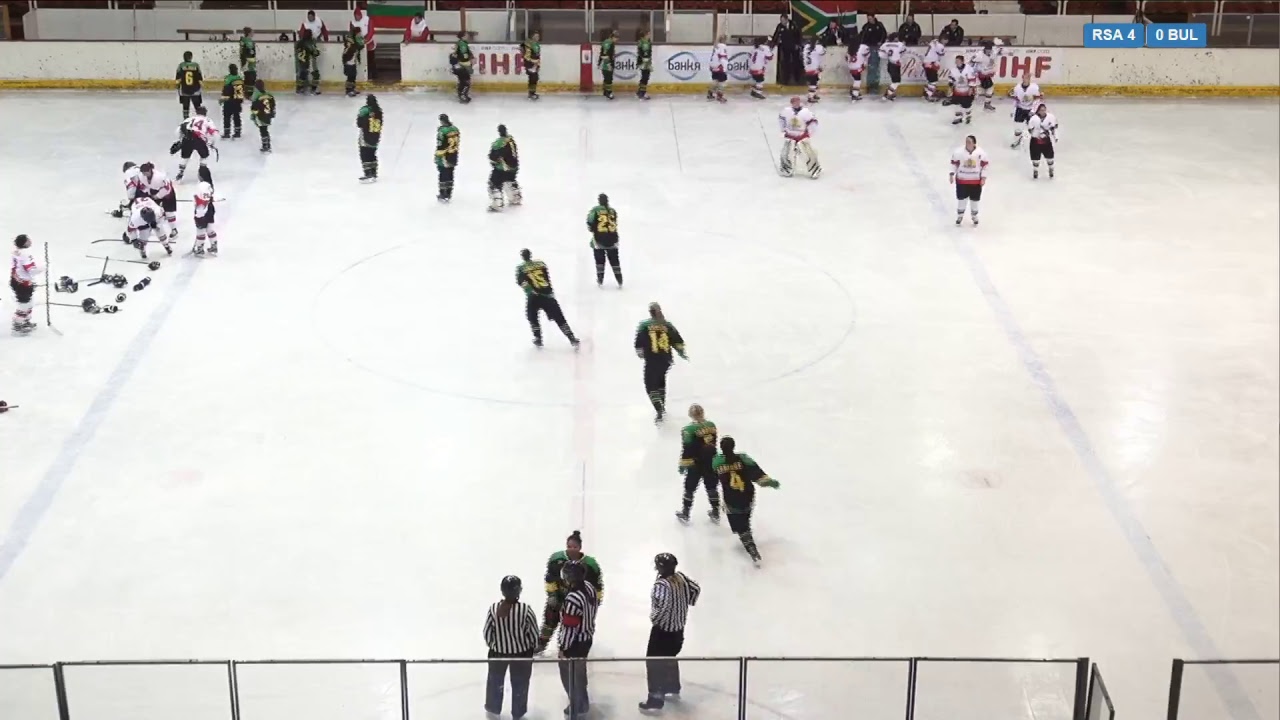 Oftentimes, goaltenders are categorized by the style of their positioning. Traditionally, it will be either a stand-up goalie, butterfly, or a hybrid of sorts. Relleen, on the other hand, tends to base her style off of that intuitive feeling she has and how her body needs to respond in order to make the save.

“It’s pretty difficult to describe my goaltending style,” she said. “I’ve never really thought about how it looks. A lot of the time I just let my body do the work and let my mind follow.”

What the Future May Hold for Relleen

Like the vast majority of women’s hockey players, Relleen is committed to growing the game for the next generation. Perhaps especially so for future young South African players. Having played and gotten the experience in Bulgaria, Relleen knows that she can bring that knowledge back to her homeland and impart those proficiencies to others. She knows too that further travel and broadening of her skill set will continue to pay dividends for she and the South African women’s hockey for years to come.

“I would love to travel the world because of hockey, and learn all the different ways that hockey is played in each country,” Relleen warmly shared. “Especially to gain new skills and hopefully pass those skills to developing goalkeepers in South Africa.”

It is the value in believing in oneself and believing in a greater good for others. For certain, this is a journey for Dominique Relleen and South Africa. One that shall hopefully see them qualify for an IIHF world tournament in the near future. Qualifying or not, it is for certain that both Relleen and South Africa are developing and becoming stronger with each challenge they are able to face as a team and as a program.

“I’ve learned a lot of important things from playing hockey,” Relleen shared. “The one that has stuck with me throughout the year is, if you work hard you can achieve your goal. All you have to do is put in the effort and believe you are capable of doing anything you set your mind to.”