To fight or not to fight that is the question…

And it keeps going un answered because as hockey fans we are already a niche market in the United States and those that make the decisions about the direction of the sport are invested in keeping all of us interested.

Growing up in Michigan with the Detroit Red Wings of the late 80’s and 90’s hockey fights were just part of the game. Even in the local minor league games fighting and spilled blood was common.

Many Red Wings fans still celebrate the anniversary of what is known now as the Fight Night at the Joe (yes it even has a Wiki page):

Going into reading this book I knew my own thoughts on hockey and violence; and thought I knew Adam Proteau’s. 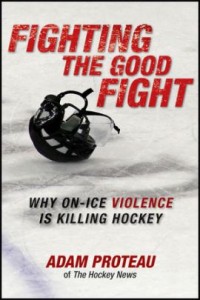 Hockey is a physical sport and as a fan and having gone to school for sports management I enjoy the skill, the passion, the contact that comes in a game; but I know they come at cost. We have injuries, fluke ones like with Mike Modano’s wrist last season and Taylor Hall being stepped on this season in warm up. Hockey is a dangerous sport; but are we making it more dangerous than it needs to be?

There are good fights and bad fights; just as there are good hits and bad hits, in hockey. A fight can change momentum, it can wake the crowd up and the home team can feed off of that. A fight or a hit that leaves a player badly injured can also change a game and dampen the crowd.

In this book Fighting the Good Fight: Why On-Ice Violence is Killing The Sport of Hockey Proteau takes a look at why he has more in common with Todd Bertuzzi than you would think; why is the NHL the only major sports league to use hate to sell; why is the North American game more violent than hockey that is played in Europe; players that had their careers cut short due to injury and the loss of their playing longer hampered the growth of teams and the sport; and more!

Heading into the book as a hockey fan you already have your own preference on the fighting, hits and the game itself; no matter your stance on the issue Adam Proteau’s book is a must read for anyone that loves the sport of ice hockey and wants to see it continue to grow.

You can order a copy of Fighting the Good Fight at Amazon.

1 thought on “Fighting the Good Fight: Taking a Look at Adam Proteau’s Book”