In the 2014-2015 season, Henrik Zetterberg has played 31 games, scoring five goals and 21 assists. Those numbers don’t necessarily sound like a guy who needs to be jump-started, but most Wings fans will tell you that they are a bit troubled by his goal total. The captain is on pace for just 13 goals, which would be the lowest full season total for Zetterberg in his career.  Hehas tallied just one goal in his past 18 games, and his current nine-game goal drought is the longest he’s been on since….the other nine-game goal drought he was on right before he scored against Philadelphia on November 26th…in an empty net. His last goal against a goaltender came November 4th against the Ottawa Senators. What’s going with the man they call “Z”? Is he shooting less, playing against tougher competition, or is it something else entirely? 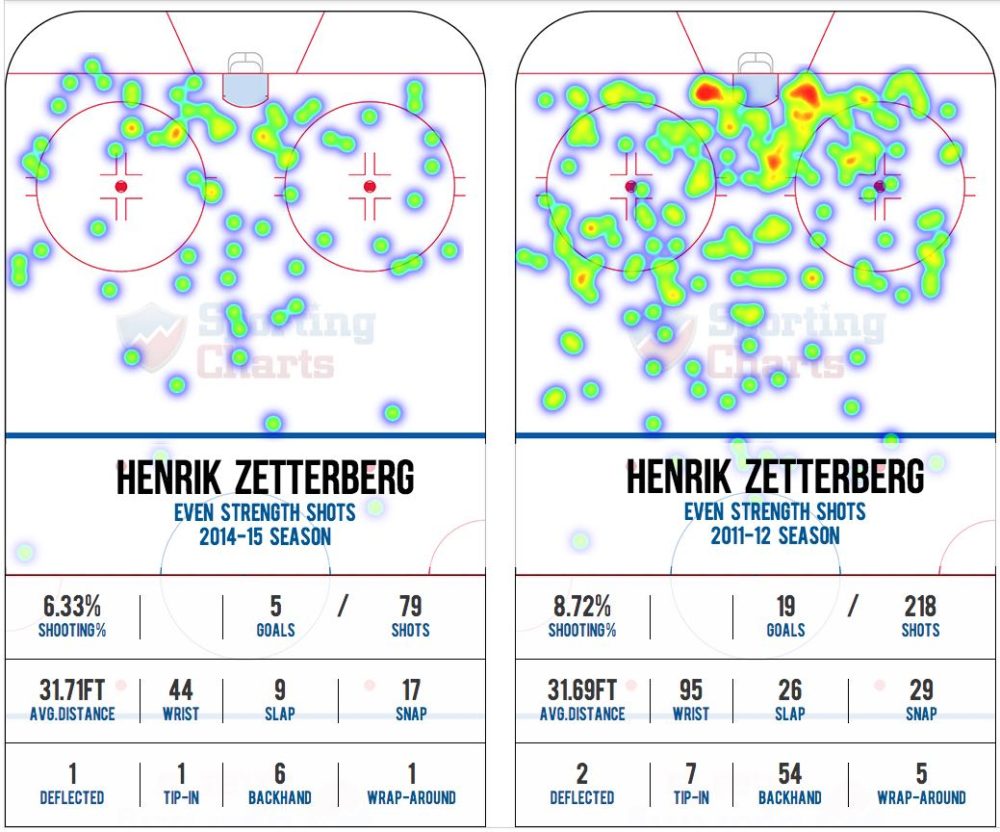 SportingCharts Ice Track tool allows us to take a look at Zetterberg’s shot locations and types. This is a comparison of Zetterberg’s shots at even strength this season compared to his last full season, 2011-2012. From this we can see that Zetterberg simply isn’t getting to the front of the net like he used to. You can see that in the 2011-2012 season, Zetterberg lived at the front of the net and at the area inside the faceoff dots. This season, you can see that his redder spots are a little further out than they are in 2011-2012. The other thing to pick up is that Zetterberg is using his backhand far less. Wings’ fans know that Zetterberg has a lethal backhand, so it’s been very surprising to see him use it so infrequently. In 2011-2012, 24.8% of his shots at even strength came off his backhand. This season, that percentage has dropped to just 7.6%. I don’t have any real explanation for why he’s not using his backhand, but it’s definitely something to keep an eye on. Four of Zetterberg’s 19 even strength goals in 2011-2012 came on the backhand. That shot needs to come back. 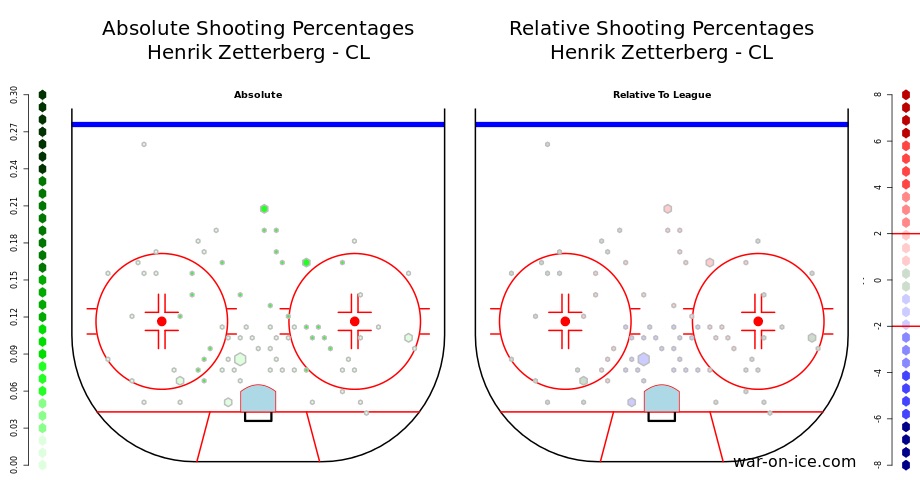 This image may be a little harder to interpret, but it comes way of War-On-Ice’s Player Hextally tool. The image on the left depicts Zetterberg’s absolute shooting percentage from the different spots where he was taken his shots. The image on the right depicts his shooting percentage from those spots relative to what the rest of the league shoots from those spots. We can see from the image on the right that Zetterberg has been a little worse relative to the league at the areas immediately around the net. You could make the case that he has simply been unlucky with the plays that happen at the front of the net. However, you can see that from most of his shooting spots, he is shooting at a same rate relative to the rest of the league. This falls into line with the theory that he’s taking shots that just aren’t as high of a percentage as what he used to do. Zetterberg needs to get back to driving the net like he did in 2011-2012 and forcing the offense to the front of the net. It doesn’t appear as if his back is giving him an issue, so I’m not sure if he is reluctant to take plays to the front of the net. Regardless, driving play to the net will be one way to get Zetterberg going.

One theory I had was that maybe Zetterberg has played against a higher quality of competition this season when compared to his previous seasons and thus has had to spend more time defending. I decided to turn back to War-On-Ice to pictographically represent if Zetterberg was playing against a higher quality of competition or was playing with worse teammates, or if he was having to start more of his shifts in the defensive zone. 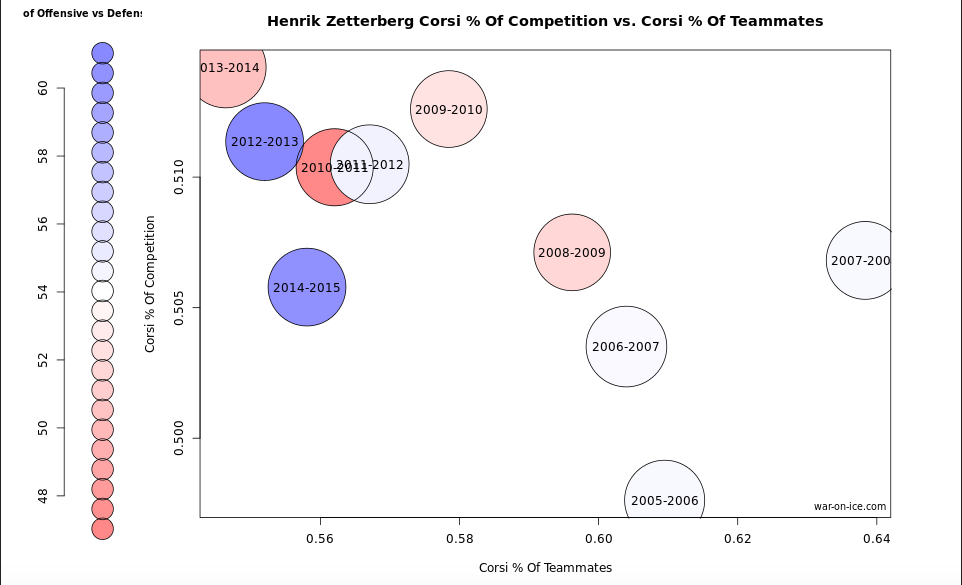 On the X-axis is the Corsi% of Zetterberg’s teammates and on the Y-axis is the Corsi% of Zetterberg’s opponents. The color of the circle represents the fraction of offensive zone starts vs. defensive zone starts and the size of the circle represents his PDO. We can see that in 2014-2015, Zetterberg has not played with as stellar of teammates as he’s used to, but by no means is this the worst group he’s played with. He also has not faced that challenging of opponents as the Corsi% of his opponents is the 3rd lowest since 2004 lockout. The really surprising thing is that Zetterberg has been extremely sheltered this season in terms of his zone starts. Zetterberg has started 238 shifts in the offensive zone compared to just 152 in the defensive zone. That ratio of 61.0% is the highest of his career. He is being given plenty of opportunities to score goals, but for some reason, he just can’t seem to put the puck in the net.

In terms of line combinations, Zetterberg has played with many different linemates such as Johan Franzen, Justin Abdelkader, Gustav Nyquist, and Pavel Datsyuk. HockeyAnalysis offers us the ability to look at how Zetterberg plays with a particular teammate in 5-on-5 Zone-Start Adjusted situations. Zetterberg’s primary teammate has been Gustav Nyquist, who has been on the ice for 226:51 of Zetterberg’s 378:22 minutes this season. Take a look at the table below which depicts the Corsi For% of Zetterberg with each teammate who has played at least 85 minutes with him this season. Data from HockeyAnalysis.

From this table we can see a couple of things. One, when Pavel Datsyuk and Zetterberg are together, watch out world. They have a whopping 4.87 goals/60 minutes when on the ice together. You can also see that they generate a phenomenal 72.27 shot attempts per 60 minutes. To make it even clearer how big of an impact Datsyuk has on Zetterberg’s game, check out this stat. In the 86:20 minutes played together, Zetterberg has a Corsi For% of 59.1%. In the 292:02 that Zetterberg has not been with Datsyuk, his Corsi For% plummets to 48.8%. Zetterberg’s Corsi For% has never been that low when playing away from Datsyuk. I know that Datsyuk has been on fire with Tatar and Helm, but to get Zetterberg going, it seems like the Wings should play the two of them together until Zetterberg can find his confidence. The return of Justin Abdelkader should also help as Zetterberg plays very well with Abdelkadaer. I think Mike Babcock must be pleased knowing that if he ever has an issue, he can turn to the combination of Datsyuk, Zetterberg, and Abdelkader and they will dominate the puck. Don’t be surprised to see Babcock turn back to that combination if Zetterberg’s cold streak extends much longer.

All in all, there is some combination of Zetterberg not shooting the same shots, getting unlucky on his opportunities, and not playing with the right teammates. I don’t think we’re going to see Zetterberg finish with a season-low in goals and I do think he gets to at least 20. The lack of luck on shots in front of the net is bound to turn around, but Zetterberg will have to be conscious about continuing to get to the front of the net. He should also consider utilizing his backhand more. It seems to be a forgotten shot for him, but it is very lethal. Finally, to get him going, the Wings should try and pair him with Pavel Datsyuk and Justin Abdelkader. The “Euro Twins” have been magical once again this season and some more minutes together may be just what the doctor ordered for “Z”.