When I wrote down the title to this article, I decided to answer the question with another question: Is Connor McDavid the next Eric Lindros? Well, why would he be?

This has become so much of an issue that Connor’s father took it upon himself to speak up for his son. He told the media that while there was an element of surprise that Edmonton won the draft lottery, it doesn’t affect Connor’s main objective, and that is to play in the NHL, regardless of who calls his name on draft day.

“Connor is very aware of the rich history and the passionate fans in Edmonton and would be proud and humbled to follow in the steps of those great players and teams. I hope my saying this will put that subject to rest.” [Edmonton Sun]

If you’ve watched Connor McDavid in the past, you would have noticed that he usually looks nervous and expressionless in public appearances and the draft lottery was no different. Did anyone ever stop to think that he could be saving his enthusiasm for the day he is actually drafted? Or perhaps at 18 years old, the whole notion of finding out where your NHL career will start is overwhelming? Or maybe he isn’t arrogant enough to assume he’s automatically going first overall. But really, what did you expect the kid to do? Was he supposed to jump up and down, and scream “I’m coming for you, Edmonton!” into the camera?

This invented controversy is coming mainly from the Eastern-based media, who are annoyed that McDavid won’t be drafted by Toronto, or at least Buffalo where they can see him play on a regular basis. Declaring themselves body language experts and deciding that Connor McDavid was unhappy that Edmonton won the lottery is merely an attempt to find new angles on a story that will garner a lot of attention. 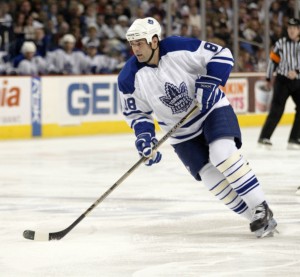 Eric Lindros during his time in Toronto (Icon SMI)

For those who are maybe too young to remember, the story of Eric Lindros began in a way in which his career ended, and that was with disappointment. Lindros, like McDavid, was touted as the next big thing in hockey. His size and skill made him coveted by all teams, and it was the lowly Quebec Nordiques who finished in the position to draft him. But Lindros made it very clear before the draft that if he was selected by Quebec, he wouldn’t report. He felt the city was too remote and small, and not marketable enough. And he didn’t like that it was predominantly French-speaking. The Nordiques chose him anyway, and went on to trade him. That trade would bring them Stanley Cup glory as the Colorado Avalanche, though you have to wonder if the presence of Lindros would have helped save the franchise and keep it in Quebec City.

Lindros is lucky that Twitter didn’t exist back then. He already quickly became a villain because of his perceived petulant behavior, which dated back to his days in junior when he refused to sign with the Sault Ste. Marie Greyhounds. Lindros came with a reputation of entitlement, that somehow his skill meant he had the right to choose where he played, despite not having accomplished enough to earn said rights. Connor McDavid is not Eric Lindros, make no mistake. The comparisons came early though, when many believed McDavid would refuse to report to the Erie Otters. They were wrong, and now McDavid is trying to lead the Otters to a Memorial Cup championship.

We live for comparisons in the sporting world. Connor McDavid hasn’t played one NHL game yet we’re all deciding that he’s going to be better than Sidney Crosby. He might be. But let him play a few years first. I understand that comparing one player to another makes for good writing. But Lindros is the wrong comparison for Connor McDavid. This kid is far from entitled. He’s grounded and he’s humble, despite being labelled the best player since Mario Lemieux and Sidney Crosby by the Great One himself.

What I find interesting about this whole silly debacle is the notion that McDavid would have preferred going to Toronto. Yes, he’s from the area, and yes the Leafs were his favorite team growing up. But at what point can anyone honestly say he would have more success there than with the Oilers? Let’s face it. Edmonton, for all their troubles and mismanagement, and have a dynamite core of young players, players who aren’t that much older than McDavid. They can grow together and (hopefully) find success together. Toronto is about to tear things down and rebuild. They don’t have a coach or a GM and they don’t have the kind of young talent that the Oilers have.

Now don’t misunderstand me. I’m not suggesting that the Oilers are necessarily leaps and bounds ahead of the Leafs. They have a porous defence and no goalie. But, in terms of the core of players, the Oilers have a talented group that just needs a kick in the right direction. The Leafs are likely to have a fire-sale in the offseason. If I’m Connor McDavid, I want to go to a team that has pieces in place already. The Oilers have a difficult task, however, which is to actually do something with the talent they have, something that has eluded them in recent years. I don’t know if they can do it. But they certainly appear closer than the Maple Leafs.

At the end of the day, both teams are bad. Just like Buffalo and Arizona, which were McDavid’s other possible landing points. When you get drafted first overall, you usually end up on a rebuilding team. That’s the way it works. So let’s stop assuming that Connor McDavid is crying himself to sleep at the thought of playing in Edmonton. The only ones crying are those who want to fabricate stories because that’s all they have to hang their hat on.