Well the answer to that question is, Reimer sure hopes he is.

This past week Reimer found a spot between the pipes for the Leafs for the first time in over three weeks since playing 2/3 of the Buds pounding against the Nashville Predators. And in his two appearances last week, Reimer looked stellar.

The 26-year-old Reimer pretty much single-handedly won the Leafs their 2-1 contest against the Detroit Red Wings when the Buds were able to squeeze out a 2-1 shootout victory after being outshot 42-19 in regulation. Then Sunday afternoon, 17 hours after the Buds won the second game of a home-and-home against, Reimer made 33 saves and was perfect in the shootout as the Leafs defeated the defending cup champs 4-3. 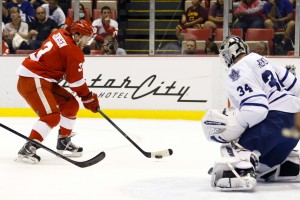 So Has Reimer Earned Himself the Net?

Well prior to his starts this past week Jonathan Bernier had played a career-high nine straight starts going 6-2-1 in that stretch. Head coach Randy Carlyle made it very clear that the starting position was Bernier’s to run with and run with it he has. And with the Laval, Que. native perfect in his last three starts with a 1.33 goals against average and a 0.964 save percentage in those games, it’s hard to find a reason to de-throne the number one guy.

In fact, despite what Carlyle said this off-season you can really argue the number one position has been Bernier’s since last season when he saw the bulk of the starts for Leafs, taking the net 55 times going 26-19-7 with a .923% and a 2.68 GAA.

Where the argument seems to be in Reimer’s favour this season, for at least more starts is the quality of work he has displayed in the minimal starts he has had this season. For sake of the argument, lets eliminate his numbers from the games against Nashville and Buffalo. Those two games dent an otherwise small sample size.

Reimer currently sits with a record of 6-3-0 in 11 games with a .909% and a 3.25 GAA, however ignore the two blowouts where you could argue not only was goaltending horrendous, but the entire team’s play was lack-luster, Reimer would be sitting high and mighty with a .932% and 2.44 GAA, not too shabby. Though for argument sake since Bernier also saw the net during the Predator’s feasting of the Leafs his numbers adjusted would go from .920% and 2.55 GAA to 0.929% and 2.44 GAA, almost identical to Reimer.

It most certainly might be. Last year the Maple Leafs saw a drop in the standings of outrageous proportions. The Maple Leafs dropped 12 of their final 14 games to finish 12th in the Eastern Conference.

Following the Olympic break Reimer went 2-10-0 taking over the number one spot while Bernier was sidelined with a lower-body injury. Of course it’s hard to shoulder all the blame on Reimer for the collapse as the advanced statistic community called for the Leafs fall early on in the season, even while they sat comfortably in a playoff spot. Last year the Maple Leafs allowed the most shots, giving up an average of 35.9 per game.

Jonathan Bernier had owned the net before going down with a lower-body injury last season.(John E. Sokolowski-USA TODAY Sports)

Unfortunately, it seems like the net will remain Bernier’s. However, where Reimer might get a little love is the fact that Carlyle has split the goaltending duties in back-to-back games this season. And going forward the Leafs have 11 more sets of back-to-back games, so that should mean at least 11 more starts for Reimer.

This past off-season Reimer reportedly asked management to be traded out of Toronto after losing his starting spot and assumingly losing the confidence of the team and his coaching staff. However, even in the midst of minimal starts the season Reimer has been his jolly chipper self, full of laughs at morning skates and working his butt off to get back between the pipes. However, unless an injury or the poor-play-bug bites Bernier, expect to see more of No. 34 on the bench.