That the New York Islanders fired head coach Jack Capuano Tuesday is not the biggest story surrounding the team.

What happens next is.

Capuano seemed to be on borrowed time all season, what with the Isles disastrous start and sitting at the bottom of the Eastern Conference standings midway through the 2016-17 campaign. His firing was an eventuality, whether it happened in November when the club was at its nadir or now when things have stabilized a bit, or if Capuano had somehow survived the entire season only to be dismissed after 82 games.

Capuano was not going to be the Islanders head coach next season.

Even general manager Garth Snow, who, by the way, provided the kiss of death vote of confidence more than a month ago, confirmed that Capuano was on borrowed time in Brooklyn.

Speaking with reporters on Tuesday, Snow provided this nugget when asked about the timing of Capuano’s firing, with the team coming off a 4-0 road win in Boston on Monday and 6-3-2 in its last 11 games.

“At the end of the day, I don’t think Jack was going to be a coach that we were going to bring back. To name Dougie Weight the interim head coach, we can start our coaching search now and not worry about the ramifications of that with Jack as the head coach.”

OK then. This move temporarily quiets the leather lungs who have chanted “Fire Cappy!” at the Barclays Center seemingly since the first drop of the puck this season, regardless of the team’s back to back 100-point seasons and first playoff series win in 23 years last spring, not to mention Capuano ranking second on the club’s all-time wins list.

This year’s team has badly underachieved, though, and the firing of Capuano is justified.

So, what are the next steps for the Islanders moving forward?

Tip of the Snow(y) Iceberg?

Looking at the big picture, the Islanders new owners, Jon Ledecky and Scott Malkin, need to decide who is going to head up the hockey operations next season and beyond.

Will Garth Snow continue to be that person? Or will the axe also fall on Snow, the Islanders general manager since 2006, and a new GM be hired before the June draft?

Whether or not Snow stays on as GM, will the owners hire a team president to oversee the general manager and all hockey operations, as is the case with Columbus, for example, where John Davidson serves as president and Jarmo Kekalainen as GM?

The fact that Snow supposedly is immediately heading up the coaching search is somewhat shocking. It leads to many questions, not the least of which is why rush to make a hire if the person (or people) the coach will report to are not even in the organization yet? Not to mention, why move so quickly when the top candidates are not even all available just yet?

Of course, the first of those questions is answered if Ledecky and Malkin already decided Snow is their man moving forward. However, with his spotty overall track record, in particular his handling of free agency last summer, it’s difficult to believe, or stomach if you are an Islanders fan, that Snow is guaranteed employment in Brooklyn past this season.

To his credit, Snow shouldered blame, as well, on Tuesday.

“I don’t think there’s a player on our roster that I haven’t had a hand in either drafting, picking up off waivers, a trade, free agent signing, said Snow. “Same with the staff, whether it’s trainers, coaches, scouts. So obviously (I’m) not hiding from the fact that it starts with me.”

Captain of the Ship

Of course, no matter who, ultimately, makes the decision on the next head coach, that hire is extremely important.

Gerard Gallant, recently kicked to the unemployment line by the Florida Panthers, and a former Isles assistant, is the sexy name being bandied about on social media to replace Capuano. And if the team makes an in-season hire, then quite possibly Gallant is the Islanders man.

Whoever it is the Islanders choose to replace Capuano, it is imperative that team captain John Tavares is on board with the new coach.

Why does No. 91 deserve this special treatment? 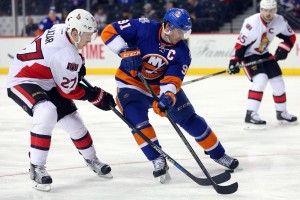 Simply because he is the Islanders most valuable asset, one of the league’s premier players; and because he hits unrestricted free agency in the summer of 2018. So, making Tavares part of the process, even if it’s only at the beginning or end to receive his input, keeps him engaged with being a New York Islander. It also confirms his value and importance to the organization before the two sides begin discussing a contract extension, likely this upcoming off-season.

Yes, he is that important to the Islanders; and it seems the powers that be are well aware of that already as Tavares was either consulted about Capuano’s firing, or made aware of the pending move before it became final.

Don’t talk to me about Playoffs!

Of more immediate concern to Tavares and the Islanders is the second half of the season.

Crazy as it may sound, the Isles are only seven points out of the eighth and final playoff spot in the East, though, to be fair, they do have seven teams ahead of them, with 40 games to play.

Snow said he expects Weight to run the same on-ice systems Capuano did, so the hope here is that the team gets a jolt from the firing of its coach and that the players step up for Weight, a well-liked and respected assistant under Capuano, who was a star in his own right during his NHL playing career.

Unless Snow swings a major trade or two before the Feb. 28 deadline, what you see is what you get personnel-wise. If there was someone who could help from AHL Bridgeport, that player would have been in Brooklyn by now.

The good news, though, is that many an Islander is trending upwards now, and it starts in goal. Since replacing Jaroslav Halak as the club’s No. 1 goalie, Thomas Greiss has allowed two goals or fewer in six of seven starts.

Of course in that one other game, he did surrender seven down in Carolina, but I digress.

Tavares has five goals in his last three games. Jason Chimera is (finally) alive and well, with goals in three straight. Nick Leddy is 2-3-5 in three. The kid Anthony Beauvillier is playing with some confidence and flair. Josh Bailey has a goal and four assists in his last three.

It wasn’t enough to save Capuano’s job. But will it snowball throughout the lineup and, perhaps, help make something out of a season going nowhere?

That is the next, and most immediate, step for the Islanders.