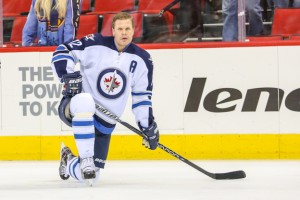 Despite being a pending unrestricted free agent, Olli Jokinen will stay with the Winnipeg Jets for the rest of the season. (Photo By Andy Martin Jr)

Another NHL trade deadline has come and gone and once again, the Winnipeg Jets chose to watch from the sidelines, instead of getting involved in the chaos and striking a deal. General manager Kevin Cheveldayoff stood pat with his lineup, despite the fact that veterans Devin Setoguchi and Olli Jokinen are set to become unrestricted free agents on July 1.

Now not of all the news is bad news. The Jets didn’t mortgage the future by becoming buyers at the deadline. Therefore the prospects and draft picks stay with the Jets and they can continue to build for the future.

But by not trading the likes of Setoguchi and Jokinen, the Jets failed to add to their cupboard of prospects and will most likely let both players walk away and get zero in return. The non-trade of Setoguchi in particular is damaging. The Jets acquired Setoguchi for a second round pick in the 2014 entry draft in the offseason. The native of Taber, Alberta, has recorded 11 goals and 15 assists in 62 games this season, far below expectations. Setoguchi was a healthy scratch on one occasion and has ridden the pine on numerous others for inconsistent play. While there was talk that Setoguchi’s old team, the San Jose Sharks were interested in acquiring Setoguchi, there was no action taken when the deadline passed.

Jokinen, on the other hand, was signed as an unrestricted free agent in the summer of 2012. The 35-year-old Finn is costing the Jets $4.5 million per season, but at least the Jets didn’t have to give up anybody in return. Jokinen was excellent in the Olympics, as he played a major part in Finland winning the bronze medal. It was thought his market value went up, because of his strong play in Sochi. However, Jokinen will stay put with the Jets for the remainder of the season. While the man they call the Joker is having a decent season, (14 goals and 20 assists in 63 games this season) one wonders if the Jets played their cards properly even with the wild card in their hand. There is no doubt Jokinen will receive offers come July 1, and the Jets could very well be cashed out on chips come free agent frenzy.

All of this was happening while the Jets were coming off a disheartening 3-2 overtime loss to the New York Islanders on Tuesday night. The price of the loss proved costly as rookie Mark Scheifele suffered a MCL injury and is expected to be lost for 6-8 weeks. It was the Jets first loss since the Olympic break, but signs of a bad result were imminent. Despite victories over Phoenix and Nashville, the Jets were outshot in both games and badly lost the Corsi battles on top of that. Ondrej Pavelec was terrific in both of those games, but relying on a goalie that is prone to inconsistency isn’t the proper course for the playoffs.

Currently the Jets are tied with Phoenix for ninth place in the Western Conference, one point back of the Dallas Stars for the final wildcard spot with the Stars and Coyotes holding a game in hand. The Jets also have a history of fading down the stretch since the franchise moved to Winnipeg in 2011. While the Jets are close to that elusive playoff spot, the team isn’t good enough to maintain a long playoff run. The goal has always been to get the team in position to be a contender in the playoffs for many years, not just hoping for a miracle run. Cheveldayoff had a chance to make moves today that could have helped out in the long-term, but he failed to pull the trigger. The Jets and their fans can only hope that standing pat, does not mean getting lost in the future.