The Los Angeles Kings expect goaltender Jonathan Quick to return to the lineup by mid-February, according to comments made by general manager Dean Lombardi on Wednesday.

This news comes as a surprise based on the original report that the team would be without their starting goaltender until potentially March.

His mind and said March when he meant mid-February for Quick's anticipated return.

Quick has been out of the lineup since suffering a groin injury during the team’s season opener against the San Jose Sharks on Oct. 12. After Quick underwent a non-surgical procedure in October, Lombardi estimated his return time at three months but that rehabilitation time for Quick’s injury varied. 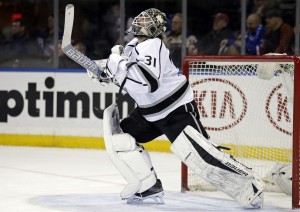 The situation has created a major obstacle for the Kings to overcome out of the gate this season.

They’ve been starting Peter Budaj who has posted a 13-7-2 record with a 2.27 goals-against average and .907 save percentage and played well overall. However, at 34-years-old, there has been speculation over what the Kings may do to address the backup role for some relief. Jeff Zatkoff, who has been handling the relief duties, has gone 1-5-0 in seven games this season, while registering a 3.20 goals-against average and .882 save percentage.

The heavy workload on Budaj is taking its toll on the veteran netminder. After tallying five-straight wins from Nov. 17 through Nov. 26, he’s yielded 14 goals on just 101 shots and would benefit from playing less.

However, addressing this issue is not an easy fix in today’s NHL, where a premium is placed on goaltending depth and exacerbated by the upcoming expansion draft in June.

Team Canada has set their roster for the 2017 World Junior Championship after a string of cuts to bring it down to 22 players.

The roster cuts include forwards Zach Senyshyn from the Sault Ste. Marie Greyhounds (OHL) and Sam Steel from the Regina Pats (WHL), defensemen Guillaume Brisebois from the Charlottetown Islanders (QMJHL) and Samuel Girard from the Shawinigan Cataractes (QMJHL) and goaltender Michael McNiven from the Owen Sound Attack (OHL).

The 22-man roster includes the following forwards, defensemen and goaltenders:

The tournament will be played Dec. 26 through Jan. 5 with games at the Air Canada Centre in Toronto and the Bell Centre in Montreal.

Team USA will be without forward Brock Boeser for the World Junior Championship because of a wrist injury requiring minor surgery, according to the Grand Forks Herald’s Brad E. Schlossman on Wednesday.

The 19-year-old sophomore at the University of North Dakota has been out of the lineup for the Fighting Hawks for the past five games after playing through the injury to start the season. In 13 games in 2016-17, he’s tallied seven goals and nine assists.

He was named to Team USA’s preliminary 27-man roster and was expected to be a top forward for the club at the tournament. He was a member of the bronze medal-winning United States team at last year’s World Junior Championship.

He is expected to return to North Dakota’s lineup sometime in January, according to a report by the school on Wednesday.

— Winnipeg Jets defenseman Tyler Myers has ‘plateaued’ in his recovery from a lingering back injury, according to comments made by head coach Paul Maurice on Wednesday. The 26-year-old blueliner was originally listed as day-to-day but has now missed more than a month of game action.

Tyler Myers has plateaued in his recovery according to Paul Maurice. Needs to make progress before there can be talk of his return.

— The Pittsburgh Penguins made history by defeating the Boston Bruins 4-3 in overtime on Wednesday to give them their seventh straight win.

The @penguins have accomplished something not even the great MTL, NYI or EDM dynasties did. Given this age of parity, that's noteworthy. pic.twitter.com/KtFyvaer4u

— Ottawa Senators forward Mike Hoffman crosschecked San Jose Sharks forward Logan Couture in the back of the head, earning himself a five-minute major penalty and likely a call from the NHL’s Department of Player Safety on the play. The Sharks defeated the Senators 4-3 in a shootout on Wednesday.

Vicious cross-check from Mike Hoffman to the back of Logan Couture's head. Five-minute major. Brutal. pic.twitter.com/phwAuVNY7D